Exercising your options: Getting a good workout even if you’re not ready to return to the gym 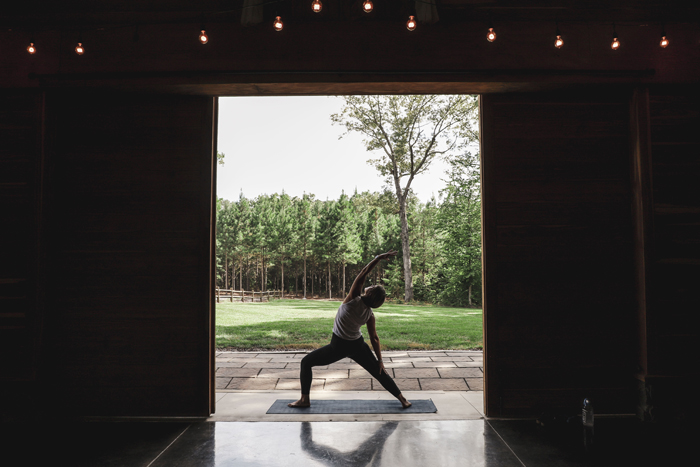 When the gyms shut down this spring, a lot of folks hit the great outdoors.

Lynn and Angela Lippard used an All Trails app to find places within an hour of their Salisbury home.

“We’d go mostly Saturday and Sunday, looking for something different,” Angela says, since beforehand they usually walked near home.

She’d select a distance anywhere from three to 13 miles. So far, the couple has been to Dan Nicholas, Badin Lake, Lake Norman, Lake Corriher and more. They tend to go further away for longer treks, she says. They’re joined occasionally by their friend, Sheila Basinger.

Since retiring this summer, Dave Scarvey has continued a lifelong passion for hiking. Now, he has the luxury of setting out mid-week, when trails are not as crowded.

“I drive by my gym almost every day but do not feel comfortable going back yet,” he says. “I feel it is a risk that I do not have to take. At least once a week I try to spend a day hiking. In mid-March I ordered a Concept 2 rower anticipating the gym shutdown. Since it arrived near the end of March, we have rowed 1 million meters on it.” 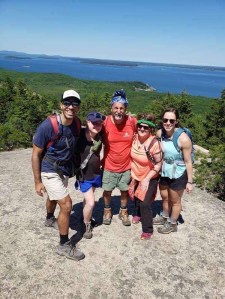 Dave and his family have hiked at national parks around the country the past few years but for now, he’s sticking closer to home, selecting hikes within a two-hour drive.

Dave says he always tries to be prepared before hiking and always lets someone know where he is going. He sends his wife, Katie, a picture from the trailhead in case he does not return on time.

“The peace and quiet is relaxing and I love being able to go at my own pace,” he adds. “I have been told that I am not as patient as I could be with slower hikers!”

It took a lot of patience for Ester Marsh to welcome back members of the J.F. Hurley Y as the Y opens Tuesday at 30 percent capacity. It’s been a long road, says the health and fitness director. The Y started online classes not long after it closed in mid-March. 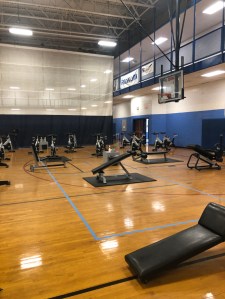 Machines and equipment at the J.F. Hurley Family Y are now spaced appropriately throughout the facility. Submitted photo

“That was a lot of work, but it was really rewarding because of the feedback I got,” Ester says. “But it was hard to stand in front of a tablet and motivate people. You don’t understand the feedback and energy you get when you’re teaching a class. We did work very hard and we felt we needed to go above and beyond to keep members engaged.”

The Y staff did a deep cleaning with plans to open in April, but those plans kept getting pushed back. Then they were ready for a June 1 opening. That also did not happen.

“That was like a punch in the face,” Ester says.

Finally, the Y was allowed to open the pool and have outside classes, along with summer camps.

“It was great for me to have people in the building,” Ester says. “It gets depressing when no one is here for a period of time.”

Even though the Y will only have 30 percent capacity, Ester doesn’t think that will be a problem because of the size of the building. Most Ys nationwide are reporting 25 percent attendance.

“There are still plenty of people who are not comfortable about going back in, and that’s OK,” Ester says. “But I am such a believer in exercise. It’s been hard what you believe in to your core and then to be told, no you can’t. That was really hard for me personally, because it didn’t make sense.”

Mary Willis Page was ready to return to the Y. As a cancer survivor, she feels exercise is important. She had a doctor’s note to return as soon as she was allowed.

“I was a slave to my FitBit,” she says. “I would go to the Y five or six times a week either to a class or to use the elliptical. I would religiously get 10,000 steps a day in. Then corona hit and the Y shut down.”

Still, she says, “They have done everything they could do to keep us connected.”

Mary Willis filled empty juice containers with water to use as dumbbells to join workouts via Facebook Live. It was tough, though, not to throw a load of laundry in the wash, or find other things to do during the workout.

Since she’s returned to the Y to use the elliptical, she says, “I am so comfortable, because sometimes I have the whole room to myself. The equipment is appropriately distanced and spotlessly clean.”

She adds, “I have not maintained my pre-March fitness, and I can tell. But I’m doing the best I can.”

Although she eventually got screen fatigue, the online classes were gratifying, she says. “I knew people were there and leaving comments. Teaching yoga was so purposeful for me, and it gave me a reason to put on mascara! There was a lot of appreciation and love for what I was doing. That has warmed my heart and kept me going.”

Her next in-person yoga location will be at the Barn at Cedar Hill on Clark Road in Salisbury beginning Sept. 9. You can find out more on Meredith’s Facebook page, Big Love Yoga.

Yoga classes can take place either on the lawn, or inside the 4,000-square-foot barn, built by one of her former students.

“It will be rain or shine,” Meredith says. “We’re pretty excited and hopeful. We’re all craving human interaction. Just being in the presence of other humans has lots of positive benefits.”

Sarah Michalec? Not so much. Unless you count being with her husband, Russell, and their 4-month-old son, Hank. 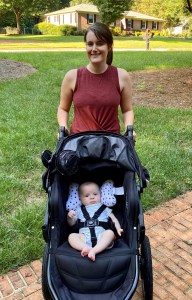 Sarah Michalec and her son, Hank, 4 months, walk their neighborhood for exercise. Sarah and her husband, Russell, have not returned to working out at the gym yet and don’t know when they will. Submitted photo

“We both went to the gym every day,” Sarah says, “but that slacked off when I was pregnant. We’ve been overcautious this whole time and we’ll probably will continue this for a while longer because we’re just unsure.”

Sarah has been taking Hank for walks in the neighborhood, while Russell is a runner.

“Running is just not for me,” Sarah says.

She adds, “We have some very basic workout equipment we had before, so we’re just doing that.”

It took Grace Yatawara a month to find 20-pound dumbbells, which she finally ordered online.

“I’ve been trying to build a home gym,” says Grace, a local well-known golfer who now lives in Raleigh. She’ll be playing Monday in the Labor Day four-ball tournament with her sister, Lily. She has also purchased resistance bands.

Grace has played some golf in Raleigh, and has also explored the city’s running trails. She says she has no plans to go back to the gym anytime soon.

Her gym at work will only open when it is 100 percent capacity, she says.