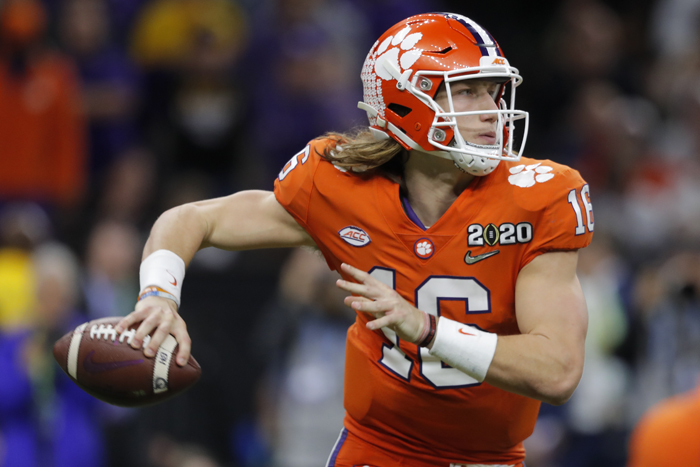 FILE - In this Jan. 13, 2020, file photo, Clemson quarterback Trevor Lawrence looks to pass against LSU during the second half of an NCAA College Football Playoff national championship game in New Orleans. The top-ranked Tigers are 29-1 over the past two seasons and have won five straight ACC championships. (AP Photo/Gerald Herbert, File)

GREENSBORO (AP) — Top-ranked Clemson is the preseason favorite to win the Atlantic Coast Conference championship for a sixth straight season.

The league released voting results Friday from media members for predicted order of finish and preseason all-conference picks, with the Tigers picked ahead of No. 10 Notre Dame and No. 18 North Carolina.

The Tigers have gone 29-1 over the past two seasons and have won 22 straight against league teams dating to October 2017.

Brian Kelly’s Fighting Irish has been a member of all other league sports since the 2013-14 season, but they’re giving up their cherished football independence amid the coronavirus pandemic to compete for the ACC title.

The ACC won’t have its traditional two-division format this year while playing a 10-game league schedule. Teams can play a nonconference game held within its home state.
Miami is the first ACC team to play by hosting UAB next Thursday, while the ACC championship game will be held in Charlotte either Dec. 12 or Dec. 19.