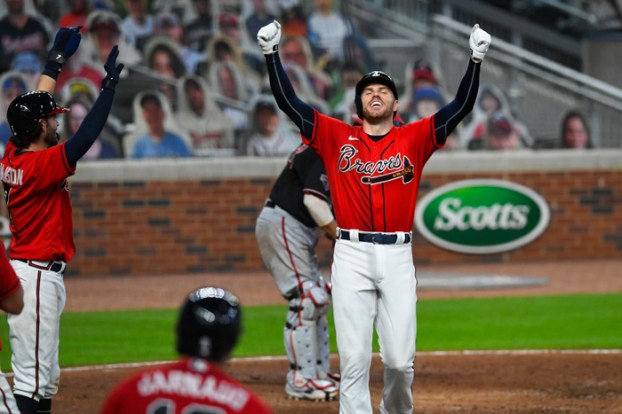 ATLANTA (AP) — Trea Turner gave Washington the lead by hitting a sixth-inning home run off Will Smith and the Nationals held on in the seventh to beat the Atlanta Braves 10-9 on Friday night and split a doubleheader.

Ronald Acuña Jr. homered twice and Dansby Swanson added a two-run shot as the Braves beat the Nationals 7-1 in the first game. Acuña hit three home runs in the doubleheader.

Travis d’Arnaud hit a two-run homer in the seventh inning of the second game off Nationals closer Daniel Hudson. Nick Markakis then hit a grounder off Hudson’s leg that Turner fielded before throwing high to first for an error.

With Markakis at second base, Hudson recorded three consecutive outs. Hudson struck out Johan Camargo to end the game, earning his seventh save.

The Nationals were without two outfielders. Juan Soto was held out with a sore left elbow announced less than an hour before the first game. Adam Eaton did not play after leaving Thursday night’s game at Philadelphia with a jammed knee.

The Nationals knocked starter Huascar Ynoa out of the game by scoring five runs in the third.
Turner, who began the day leading the majors with his .366 batting average, hit his ninth homer off Smith (2-1) with two outs in the sixth. The Nationals added two runs in the seventh off Patrick Weigel, making his major league debut.

With two outs in the seventh and the bases loaded in a three-run game, utility infielder Charlie Culberson was summoned to make his fourth career pitching appearance and first of the season. Culberson ended the inning on Turner’s flyball to right field.

Wander Suero (2-0) had two strikeouts in a perfect fifth inning.

Acuña slammed his bat to the ground in apparent frustration after hitting what appeared to be a harmless flyball in the first inning of the opener. Nationals center fielder Victor Robles drifted back as the ball kept carrying before finally landing behind the wall in center field.

Nationals right-hander Austin Voth was as surprised as Acuña to see the ball clear the wall.

“I thought he hit it pretty well, high,” Voth said. “I didn’t think it had the distance. I was kind of shocked when it went out.”

Acuña walked to open the third before Swanson’s homer to left-center off Voth (0-5), who allowed five runs and seven hits, including three homers, in 4 2/3 innings.

In the fourth, Acuña’s line-drive homer to center field drove in Adam Duvall, who doubled.
Acuña was on the injured list from Aug. 12-25 with left wrist inflammation and this week was held out with a sore hamstring.

“He kind of picked up where he left off and that’s good for us,” Braves manager Brian Snitker said.

Tommy Milone gave up one run on six hits with no walks in four innings in the opener. He made his second start since he was acquired by the Braves from Baltimore. Darren O’Day (3-0) pitched a scoreless fifth.

Nationals: Josh Harrison, starting in left field, was hit by a pitch from Ynoa on his left forearm near his wrist, knocking him out of the second game. … 3B Carter Kieboom, who was hitting .200 with no homers when he was sent to the team’s optional training site on Aug. 26, joined the Nationals in Atlanta and could be poised to return to the active roster. Manager Dave Martinez said he wanted to “watch his swing and see where he’s at.”

Braves: 2B Ozzie Albies (bone contusion in right wrist) took batting practice. He was placed on the IL on Aug. 5. … LHP Cole Hamels (triceps tendinitis) is expected to throw batting practice on Sunday as he tries to move closer to his 2020 debut.

Asdrúbal Cabrera hit a triple off the right-field wall in the fourth. Cabrera scored when Duvall, celebrating his 32nd birthday, made a leaping catch over the left-field wall to take a homer from Yan Gomes.

Braves: LHP Max Fried (6-0, 1.60) will try to remain undefeated after allowing only eight runs in his first eight starts.