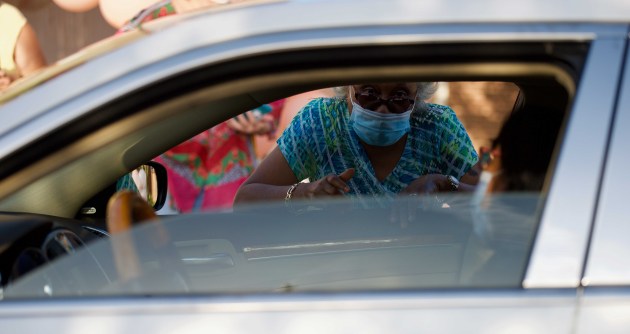 Carl Blankenship/Salisbury Post - Sandra Funderburk speaking to life-long friend Doris Goodman, who was one of the long line of people who came by to congratulate Funderburk on her retirement. 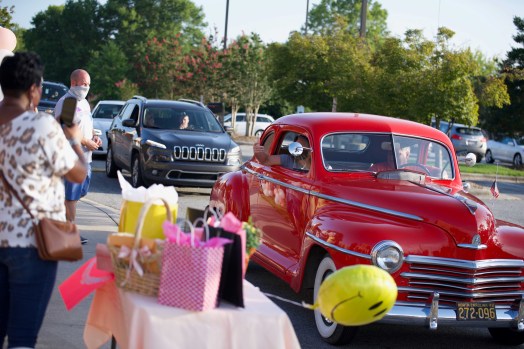 Carl Blankenship/Salisbury Post - Cars filtered through and dropped off gifts for Funderburk. Everyone stopped to speak to her briefly.

SALISBURY – The line of cars in front of the J.F. Hurley YMCA seemed endless Thursday evening.

The steady flow of people traveled there to congratulate Sandra Funderburk on her retirement after 42 years. They came with cards, gifts and balloons. Many of them have known her for decades. Funderburk’s last day was Aug. 1, and the drive-thru celebration for her was a surprise.

Doris Goodman has been friends with Funderburk since they were in kindergarten. They used to walk to school together in elementary and high school. The pair attended Livingstone College together. Goodman said Funderburk is an institution that people have known through generations.

“She is a confidant, an excellent role model, a very good friend, a hard, tedious worker, a dependable person,” Goodman said. “She is active in her church. She is just a wonderful person.”

Funderburk originally worked at the front desk at the old location on Fulton Street, and moved to Hurley when that facility closed.

“I just enjoy being here,” Funderburk said. “Seeing families and children, then they’re married and bringing their children. I just enjoyed it.”

She knows most of the people the members at this point

Hurley Y Executive Director Richard Reinholz said he first met Funderburk 21 years ago when he was a member at the old YMCA on Fulton Street.

“She’s kind of the mother of the YMCA,” Reinholz said.

Reinholz said it is remarkable she worked for one organization for as long as she did, and holds the record for working full time for the Y by far.

“I don’t think that’s a record that’s going to be broken,” Reinholz said, adding she will be a difficult person to replace because of the relationships she built.

Reinholz said the Y had to host the event outside, because the number of people who would want to attend would have definitely violated gathering restrictions.

Natalie Rivers, Funderburk’s daughter, said the YMCA quickly became a family affair. Rivers spent summers in the day camp program. She and her brother learned to swim from the organization.

“Everything that happened, we were here through it,” Rivers said, adding she was not surprised by Thursday’s turnout.

Rivers said the family asked Funderburk if she wanted to retire years ago. Clearly, the answer was “no.” She wanted to keep going because she enjoys the work.

Charles Johnson was general director for the YMCA for the last 12 years of his career. When he started, 30 years ago now, Funderburk was already a fixture there. Johnson retired after the other two branches in Rowan County were complete and while Hurley was under construction. Funderburk was one of his secretaries.

“She did a fabulous job for us,” Johnson said.

Funderburk said her plans for the immediate future are to stay safe. She was not originally planning on retiring this year, and the COVID-19 pandemic made her consider it.

“I had time to think,” Funderburk said, adding after 42 years she thought it was an indication it was time.