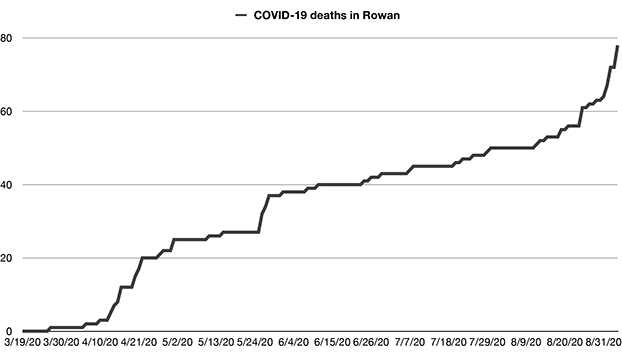 This chart shows the progression of COVID-19 deaths in Rowan County. Deaths are according to the date reported.

SALISBURY — COVID-19 deaths in the county continue to surge as six additional deaths were reported on Friday, marking 15 since Sunday and more than two dozen over the previous two weeks.

Five of the deaths reported Friday are from residents outside of local nursing homes. There also was one death at Accordius Health, which has 40 active cases in the county and four total deaths. To date, there have been 78 deaths reported in Rowan County, which makes it sixth in the state for its number of deaths.

A total of 26 deaths have been among residents not associated with a local congregate care site, resulting in an average age of 80 among the deceased.

COVID-19 continues to ravage local congregate care facilities, as 419 cases in total have been reported. Of those, 175 cases are at active nursing home outbreaks, with the largest outbreak at Trinity Oaks Health and Rehab, where 74 cases and six deaths have been reported. However, state data show a total of 81 people have tested positive at Trinity Oaks Health and Rehab.

County data show that Autumn Care currently has 50 active cases and has had five deaths, but state data show there are 51 cases there.

The Citadel, now seeing its second outbreak, currently has six cases, according to county data. State data show there are seven cases there. The number of active cases at the Rowan County Jail Annex remains at three, and only two people at Compass Health in Spencer have tested positive.

The number of active cases improved on Friday and are currently at 402 as 2,882 people in total have tested positive in Rowan County since March. The county currently has a percent positive rate of 8.74%, which is the lowest rate yet.

Hospitalizations improved on Friday and are now at 15. A total of 192 residents have been hospitalized, with an average age of 63.

The county’s weekly update on the number of beds and ventilators being used for COVID-19 patients indicate 50 of the total 103 hospital beds are occupied, while eight of the 61 available ventilators are being used. Those numbers include patients outside of the county who seek care here.

Statewide, 174,254 cases have been confirmed after 2.39 million confirmed tests for a percent positive rate of 6.4%. A total of 955 people are being hospitalized, and 2,839 people have died.

Young adults aged 18-35 continue to make up the plurality of cases in Rowan County, at 872, with an average age of 43.2 among all cases.

Zip code 28147 remains the area hit hardest by COVID-19, as it has reached 777 cases. It is also where the Citadel of Salisbury is located, which was previously the site of the largest outbreak among nursing homes in the state. Zip code 28144 has seen 642 cases, which is where both Trinity Oaks Health and Rehab and Accordius Health are located.