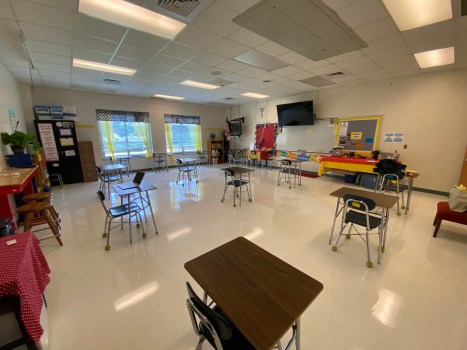 Photo submitted - Freeman's classroom spaced out for social distancing. Classrooms are limited to a maximum of 12 students.

SALISBURY – Maria Freeman has been teaching for 26 years, and her sixth-grade language arts classroom at Erwin Middle School blends traditional material with contemporary technology amid COVID-19.

Students in Freeman’s class, like every other student in the district, have iPads they use for most of their work. Freeman said it was difficult to adapt at first, but some of her younger and more comfortable colleagues have helped along the way, and now it is hard for her to imagine teaching without the devices.

“Not growing up in the digital age, that’s a somewhat new concept for me,” Freeman said, adding the social media era is foreign to her.

However, her students still do some work with pen and paper. They use old yellow readers and get a kick out of seeing names of students long-past written in the front of the books.

Freeman said she never imagined where education would be now when she began her career, and she can not predict what it will look like before she retires or even fathom where it will go before she dies.

One thing she is sure about, is educators will adapt to the challenges in front of them no matter what.

This year has been challenging, and another curveball Freeman did not expect.

“Education is the one place that will make it happen, any kind of change that comes along, any kind of challenge,” Freeman said. “Teachers may complain and gripe for maybe 24 hours, and then it’s like ‘OK, we’ve got to get on this, we have to make it happen.’ And ultimately, if we keep our students in mind, there’s no reason that we wouldn’t. They’re the why.”

This year she is connecting with parents and students in a different way, and she said she feels the beginning of school was fantastic because it alleviated a lot of the fears families have with classes limited to a maximum of 12 students.

She thinks the beginning of classes has gone well, and is glad she is not teaching remote only.

“It’s far less for intimidating for them, and we’ve gotten to connect with the kids so much more clearly because no one can hide out,” Freeman said. “If you’ve only have 12, you’ve got to talk, or at least contribute”

Freeman said the format has helped meed kids in their comfort zones as well. Instead of speaking in front of the group, a student may be able to make a video at home and show it to teachers.

Freeman said there is a strange freedom to the chaos of the beginning of the year, and she feels like people are generally happy to be at school maybe because of how long they were away.

Students have been greeted every day. One student asked freeman how many people were going to say hello to him that day. Ultimately, she is surprised at how well the year has started off.

“Magically, between 7 o’clock and 3 o’clock every day we get it done,” Freeman said, adding teachers are tired at the end of the day, but that is nothing new.