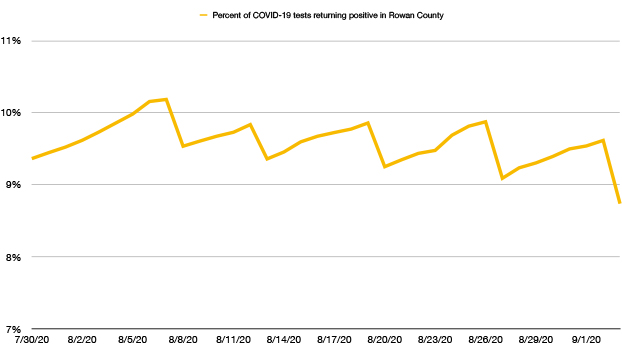 This chart shows a progression of the COVID-19 tests in Rowan County coming back positive since local officials were able to provide all negative results. The regular decreases in the graph are a result of the weekly updates in negative tests. The latest update shows the lowest percent of positives yet.

SALISBURY — The percent of people testing positive in Rowan County made a substantial improvement on Thursday, dipping below 9% after a weekly addition of negative testing data.

Rowan County’s data hub added more than 3,000 negative cases on Thursday, bringing the percentage of positive tests from 9.62% to 8.74%. A total of 2,850 people have tested positive after 32,605 tests conducted.

The percentage of positive tests is an indicator of whether spread of the virus is increasing or decreasing. The percentage hovered in the high teens for months, but has since been as low as 9.2% or as high as 10.2% since local officials found a way to ensure all negative tests were counted.

Thursday’s positive percentage is the lowest yet.

After four days in a row with new COVID-19 deaths, there were none added Thursday and the lowest number of new cases — 11 — added since July 19. As of Thursday, there were 407 active COVID-19 cases, 18 people hospitalized and 72 dead.

The number of hospital beds currently occupied, which includes people from elsewhere seeking care in Rowan County, also improved slightly Thursday, decreasing from 56 to 50. There are currently eight ventilators in use in Rowan County. Neither number is close to exceeding the local capacity.

Across the state Thursday, there were 172,209 lab-confirmed cases — a number that’s relatively flat average daily increases in cases. The number of completed tests is 2.35 million. There are 858 people hospitalized across the state, a number that has also seen positive progress, and 2,803 dead after testing positive for COVID-19.