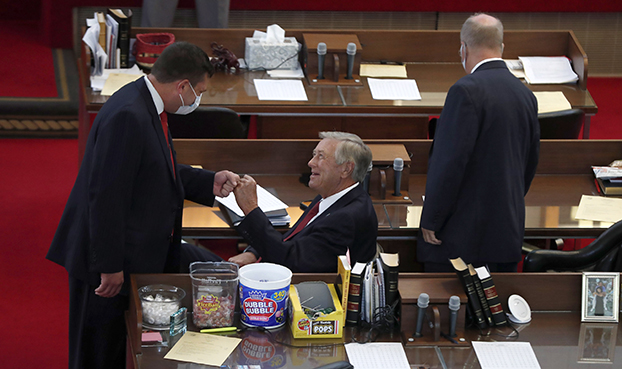 The package, which also provides a $50 uptick in weekly unemployment benefits and more funds for virus testing, tracing and personal protective equipment, cleared its final legislative hurdle with a lopsided House vote.

The measure, which already cleared the Senate on Wednesday, now heads to Democratic Gov. Roy Cooper. Although many of his spending recommendations for this two-day work session were ignored by Republican legislative leaders, Cooper has not publicly criticized the measure and has shown no signs of vetoing it.

Money is also being spent to expand rural broadband, help struggling small businesses and to recruit poll workers on Election Day. Families with at least one child will receive by mid-December $335 in stimulus-style payments. While designed to help families with child care or tutoring school children struggling with online classes, the money can be used for anything.
“This package does so much good for so many people,” Rep. Donny Lambeth, a Forsyth County Republican and budget writer, said during House floor debate. “We are funding so much to help so many today — now.”

Like Wednesday in the Senate, several Democrats in the House complained they were left out while the bill was crafted. Democrats also pitched again the expansion of Medicaid to hundreds of thousands of uninsured people, which Republicans have refused for years.

Still, most Democrats joined all Republicans present in voting 104-10 for what the Senate passed.

“We’re just not doing enough for those that we can be helping,” said Rep. Marcia Morey, a Durham County Democrat who voted for the package. She cited the needs of people who could be evicted soon from their homes due to job losses, as well as city and county governments.

Cooper’s office did not immediately respond to an email Thursday seeking comment on the bill, finalized just before the General Assembly officially adjourned their two-year session at midday. All 170 legislative seats are on the November ballot. Cooper is also running for reelection.

“Some folks believe in this chamber we could have done better. Some members are here and are willing to stay longer and do more,” said House Minority Leader Darren Jackson of Wake County, who voted no. “Voters can decide for themselves why we didn’t.”

Republicans contend they have already done a great deal even before this week. During work sessions this spring, legislators allocated well over $2 billion in North Carolina’s $3.5 billion share of COVID relief funds.

More than $300 million that had been earmarked to replace state transportation and other tax revenues had to be repurposed this week because Congress did not alter rules to spend them in that fashion. The state’s share of federal funds have to be disbursed by the end of the year.

GOP leaders refused to take up Cooper’s proposal to spend $559 million in additional state revenues in part to give $2,000 bonuses to public school teachers and smaller one-time payments to other educators. Republicans said it was too risky to spend more state dollars as the pandemic continued. But they did locate $68 million in state money to respond to recent hurricanes and earthquakes in the mountains.

The additional $50 weekly unemployment benefit would continue through the end of the year. Also on Thursday, the state Division of Employment Security said it had started distributing to displaced workers extended federal benefits of $300 a week mandated through an executive order by President Donald Trump. But that money only covers three weeks, initially.