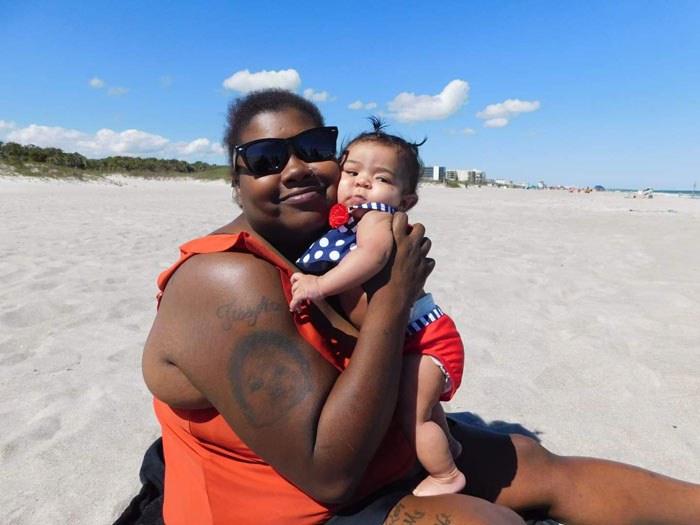 SALISBURY — In a final act of love, Ebony Evans-Kindle crawled into the back seat of the car on Aug. 27 to unlatch her daughter’s car seat right before the vehicle was struck and she was killed on Interstate 85.

Evans-Kindle, 31, was driving a Mitsubishi Eclipse when the front right tire blew. She pulled the car onto the shoulder of the Yadkin River bridge and called her former partner, Maddy Rogers.

According to the state Highway Patrol, a tractor-trailer hauling a commercial mower struck the Mitsubishi. The force of the crash caused the car to strike the guardrail and come to rest facing north in the far right lane with the lights off.

In an effort to save her daughter’s life and right before the Mitsubishi was struck the second time, Evans-Kindle unlatched the child’s car seat, Rogers said.

“She released the car seat and that’s why she was thrown from the car. She was more focused on ‘that’s my baby in the back seat and I have to do something to get my child out of the car,’ ” Rogers said.

The car seat was ejected and the child, 1-year-old ZaRiya, was still fastened inside. Ginger Parker, a passerby, pulled over to see if she could help and initially walked by the car seat. Parker and others stayed with the child until she was placed into an ambulance.

Rogers confirmed ZaRiya had severe road rash that has already required a skin graft and will require a second. The young child also has a broken leg.

The child was at Wake Forest Baptist Medical Center until her Sunday release. She will also need physical therapy to help her walk, Rogers said.

Evans-Kindle was driving Rogers’ car when the crash occurred. Rogers said she was on her way to help change the flat tire, but she had gotten into an accident also while en route.

Evans-Kindle’s children, 12-year-old D’Angelo and 9-year-old Jessyka, are obviously taking it hard, said their aunt Tabitha Hamilton. She said the family is devastated.

“It’s hard, but we are making it day-by-day,” Hamilton said of her sister’s death.

“Eb was … the glue that held us together. She was super mom,” Rogers said. “Her girls were her world.”

She recalled Evans-Kindle taking the girls to get their nails done and the last vacation they took as a family. Roger said they’d gone to Florida in 2018 and had a memorable trip.

“We had a blast. We’d never went before. That was our last big vacation together,” Rogers said.

A GoFundMe page was created by a family friend to assist the family with funeral costs and medical expenses.

A memorial service will be held Friday at 1 p.m. at Freedom Baptist Church in Lexington.

Concord Mayor appointed to RCCC Board of Trustees