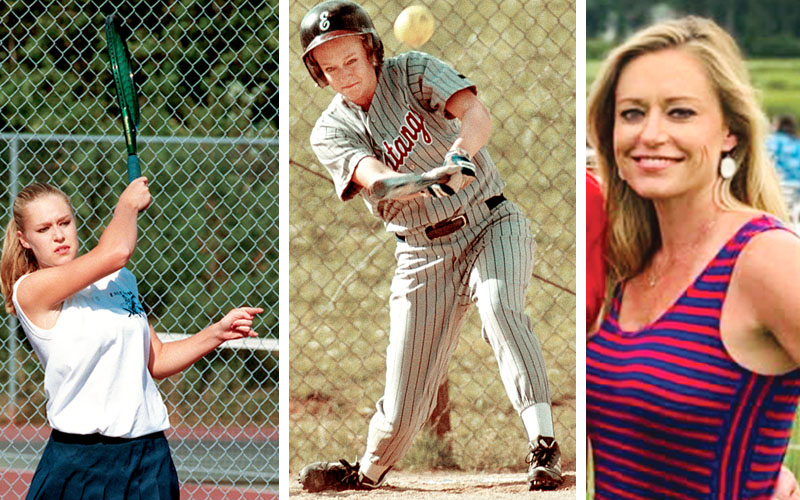 She covers a wide area. There are days when she might be on the road at 5 a.m., heading to Scotland Memorial Hospital in Laurinburg to check on a case, or maybe her destination will be Lincolnton.

The path to success started for Simpson the day she got cut from Erwin Middle School softball tryouts. That was a traumatic experience for Simpson, but she landed on her feet.

It was a different time. Simpson’s father didn’t call the softball coach to vent his frustrations. Instead, he called the tennis coach and asked if it was still possible for his daughter to try out for that team. Tennis coach Mary Ann Sunbury said come on down, and that opportunity changed Simpson’s confidence — and her life.

“I’d gone to a tennis camp, so I had some idea, and I made the Erwin tennis team,” Simpson said. “Getting cut was the worst thing that had ever happened to me, but it turned out to be the best thing. Getting cut pushed me to tennis. Then tennis turned out to be my best sport in high school. I came to love tennis.”

Simpson was a star on the strong 1990s East tennis teams coached by Worth Roberts.

“There was no jayvee team, so you had to make varsity, and you had to make the top six if you wanted to play,” Simpson said. “When I was a freshman, I was so nervous about playing challenge matches against the seniors, but I became the No. 4 seed as a freshman.  Then I moved up to No. 2 as a sophomore and I played No. 1 my last two years. Coach Roberts was a very task-oriented coach, and I learned a lot from him. He would work patiently with you one-on-one. He rarely got upset with us, but he could get fired up at times. He gave some really good pep talks before matches.”

Simpson played two seasons of junior varsity basketball before she was part of the strong East varsity squads of 1996-97 and 1997-98. She was coming off the bench for those loaded teams, but she learned valuable lessons from coach Gina Talbert.

“She was that coach that you really didn’t want to disappoint,” Simpson said. “Of course, I wanted to play more, but I realized we had a lot of talent, and I tried to have fun when I got opportunities to get in there. As the years went by I came to respect Coach Talbert more and more. When she passed (in 2015), it was upsetting for all of us.”

Simpson’s best friend, Danielle Cross (Porter), another future coach of the Mustangs, shared her basketball ups and downs, on the bench and on the court.

“Danielle was wild and free and independent and I’d been sort of sheltered,” Simpson said. “I think that’s why we hit it off so well. Danielle brought me out of my shell.”

Simpson would make a triumphant return to softball. That would come her sophomore year, in the spring of 1996.

That was an intriguing year in the history of high school softball in North Carolina, as the state began the challenging makeover from slow-pitch to fast-pitch. Technically the same sport, but essentially two different games.

The NCHSAA mandated all schools must make the switch by 1998, but there were options to move immediately or in 1997.

East was in the South Piedmont Conference in 1996, where the majority of the coaches preferred to wait, but the league ADs voted to take the plunge into fast-pitch right away.

East was the pioneer program for Rowan County, but coaches Eric Stockberger and Mike Waddell had a secret weapon.

Jennifer Lambert had been a fast-pitch middle school pitcher in Louisiana before her family had moved into the East area. She was a junior at East in 1996 and had been away from fast-pitch for a while, but it must have been like riding a bicycle. Lambert got back in the groove in the circle quickly and East, on its initial fast-pitch journey, fielded one of the best teams in 3A,

Simpson was the right fielder on that team.

“East’s slow-pitch team was some of the same girls who had beat me out in middle school and there was no jayvee team, so I didn’t even try out for softball as a freshman,” Simpson said. “But when they made the change to fast-pitch my sophomore year, that helped me. I was one of those tomboys who grew up playing backyard baseball with the guys, so I didn’t have a problem hitting fast pitching. There was one position on the team that was open — right field. I didn’t have outfield experience, but I became the starting right fielder. With Jennifer Lambert pitching, the right fielder got a lot of action. No one was getting around on her.”

Led by shortstop Missy Fesperman, East stole 200 bases and made the transition to a new game where bunts and steals were critical to manufacturing runs.

Stockberger focused on teaching the infielders, while Waddell focused on instructing the outfielders.

“Sometimes the coaches would bring a rule book to practice,” Simpson said. “They were learning the nuances of fast-pitch just like they players were. They were good coaches and we had a great pitcher (Lambert) and catcher (Alesha Mitchell).”

East went 19-4 in the regular season.

In the first two rounds of the state playoffs, Lambert pitched a three-hit shutout against Trinity and then a one-hitter to beat Forest Hills, 1-0.

Sun Valley had beaten East twice in the regular season, but East held on to beat the Spartans, 7-5, in the third round of the state playoffs. Second baseman Amy Lowman, one of three East senior starters making the transition to fast-pitch in their final year, squeezed the seventh-inning popup with runners on base. That out sent the Mustangs to Raleigh for the Final Four.

Things didn’t go smoothly in Raleigh. East graduated on a Friday night and was playing the next afternoon at 1 p.m. East lost big to Southern Nash and competitively to South Johnston and finished 22-6.

“There were a lot of good memories from three years of fast-pitch softball,” Simpson said. “I got to play with my cousins Lisa Alexander and Julie Alexander. I remember being on third base and walking home when Julie hit a ball at Kannapolis that may not have landed yet.”

Simpson could have played tennis at a small school, but she wanted the big-school experience and headed to East Carolina.

Cross went to ECU too, and the friends got part-time jobs with Parks and Rec, coaching youth boys basketball teams and officiating.

“I remember coming home and seeing Coach Talbert at the Christmas tournament,” Simpson said. “I said, ‘Well, Danielle and I are coaching now,’ and she was so proud of us.”

Simpson began academically as a psychology major at East Carolina, with the idea of following in her mother’s footsteps as a guidance counselor.

“I knew I wanted to help people,” Simpson said. “I just wasn’t sure how.”

She got her bachelor’s degree in social work.

An internship at Pitt County Memorial Hospital helped her decide to switch her career path from social work to health care.

In 2008, she went to work for Carolinas Health Care System, the company that changed its name to Atrium in 2018.

In 2010, Simpson completed work on her masters degree in health care administration and management.  That time commitment to graduate school has helped her career opportunities soar.

“I’ve been able to work my way up through the ranks,” Simpson said. “I always thought I’d end up living in Charlotte, but it’s actually been more convenient to live in Granite Quarry. I can do most of my work from the office that is set up in my house. It’s wonderful to live here. I can eat with my parents. I can eat with my brother and sister-in-law and I can be involved in their new baby’s life.”

When her buddy, Danielle Cross Porter, was coaching the East Rowan girls a few years back, Simpson would frequently sit near the East bench to lend her support.

She also ran into Coach Roberts a time or two. He always provided her with the latest East Rowan tennis T-shirt.

“I would offer to make a donation to the athletic department,” Simpson said. “But he would laugh and tell me I’d earned it.”

Time moves quickly. Simpson’s athletic days at East were more than 22 years ago and that debut season of fast-pitch softball was 24 years back.

As each year passes, her appreciation of the era in which she played and the dedicated men and women who coached her grows.

“My parents still have the framed photos from the Post of me up on the walls, so the glory days at East are never that far away,” she said. “I’m grateful for the life lessons from all my coaches. I’m grateful to have played with all-time friends who I will have for life.”