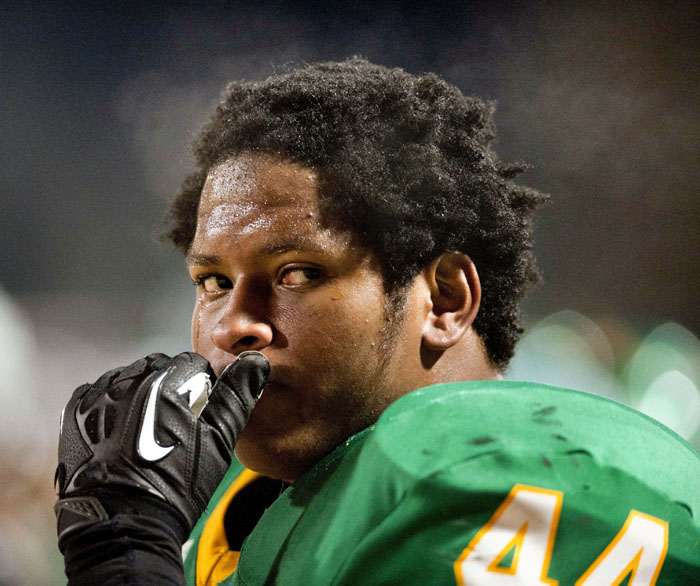 CLINTON, Miss. — You can’t teach 6-foot-5, 302 pounds, and it’s not like Wesley Jefferies can’t move around pretty well for someone his size.

The burly lineman from North Rowan is currently making his fourth stop since graduating from high school at Division II Mississippi College.

Mississippi College is in Clinton. Jackson is about 15 miles away.

Mississippi College players are working out now. The Choctaws are optimistic about playing a five-game schedule in the spring.

“I would have the option of returning to school at Mississippi for another season, but the plan is to do well enough this spring that it gets me where I want to go,” said Jefferies, who will turn 24 in December.

Jefferies blossomed into an outstanding interior defensive lineman as a junior and senior for North Rowan’s Cavaliers, racking up 51 tackles for loss in two seasons and making the All-Rowan County teams in 2013 and 2014. Playing in the 2A ranks, North was 24-4 in those two years and was ranked No. 1 in the state most of 2013.

Jefferies also was nimble enough to contribute to the school’s basketball program.

“I’ve always been light on my feet for my size,” Jefferies said.

Out of high school, Jefferies headed to California with North teammates Alexis Archie to play for Feather River Community College.

He had 22 tackles, including 3.5 for loss as a freshman. He suffered a concussion as a sophomore and his production declined to 12 tackles, two for loss.

“The whole junior college experience was humbling,” Jefferies said. “But I know I’m a better person for it. I did a little bit of growing up in California.  It helped me mature being out on my own like that.”

Jefferies made a verbal commitment to Hampton University, but after a coaching change at Hampton, he started exploring other options.

Division I North Dakota signed Jefferies with the idea of converting him to the offensive line. He practiced on the offensive side of the ball, but he did not get on the field in what became a redshirt year with the Fighting Hawks.

His next stop was D-II Minnesota Crookston.

Jefferies moved back to defense in Minnesota, which was a positive for him. He was credited with making 14 tackles for an 0-11 team.

Then Minnesota Crookston announced shortly after the 2019 season that it was ending its struggling football program.

“I was able to get back to playing defense at Crookston, and that’s the side of ball where I’m best,” Jefferies said. “But then they discontinued the program and I had to try to find another opportunity.”

That led to his latest adventure at Mississippi College, where Jefferies is determined to make his last shot his best shot.

He signed with the Choctaws in July and is majoring in criminal justice.

It’s hot in Mississippi, but Jefferies is embracing the challenge of getting in the finest shape of his life.

“There have been a lot of trials and a lot of tribulations in my life,” Jefferies said. “But I’ve kept the faith through it all. I believe it all happened for a reason.”