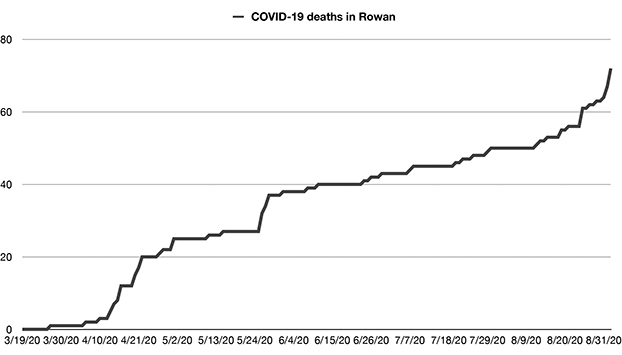 This chart shows the progression of COVID-19 deaths in Rowan County.

Three of those deaths were among residents outside of local congregate care facilities, along with one death at Trinity Oaks Health and Rehab and one at Accordius Health.

The record number of deaths reported in one week’s time in the county was set in May, when 10 deaths were reported during the week of May 24-30. That deaths are reported together does not always mean they occurred on the same day.

The five additional reported Wednesday brings the total number to 72, with all but 21 among congregate care facilities and 14 among sites with current outbreaks. The average age of deaths remains at 81.

A total of 414 cases have been among local congregate care facilities. Trinity Oaks Health and Rehab, located off of Klumac Road, is the site of the largest current COVID-19 outbreak, with 74 total cases and six deaths reported. Autumn Care on Bringle Ferry Road, has seen five deaths and currently has 47 cases among staff and residents. Three deaths have been from Accordius Health on Statesville Boulevard, which has 40 positive cases.

Other sites with active outbreaks include the Citadel, with six cases; Compass Health, with two cases; and the Rowan County Jail Annex, with three cases. Additionally, North Hills Christian School has a cluster of five cases, and St. Peters Lutheran Church Preschool, located in eastern Rowan County, has 10 cases. The preschool became the site of the latest cluster on Tuesday.

The total number of cases in the county is now at 2,839, with 417 of those cases currently active. A total of 2,350 people have recovered, amounting to a recovery rate of nearly 83%.

Hospitalizations improved on Wednesday and are now at 24. A total of 191 residents have been hospitalized in the county since March.

Hospitalizations across the state also improved and are now at 858. A total of 170,553 people have tested positive after 2.3 million confirmed cases. A total of 2,779 people have died.

Young adults aged 18-35 continue to make up the plurality of cases in Rowan County, at 857, with an average age of 43.3 among all cases.

Zip code 28147 is the area hit hardest by COVID-19, as it has reached 767 cases. It is also where the Citadel of Salisbury is located, which was previous the site of the largest outbreak among nursing homes in the state. Zip code 28144 has seen 633 cases, which is where both Trinity Oaks Health and Rehab and Accordius Health are located.