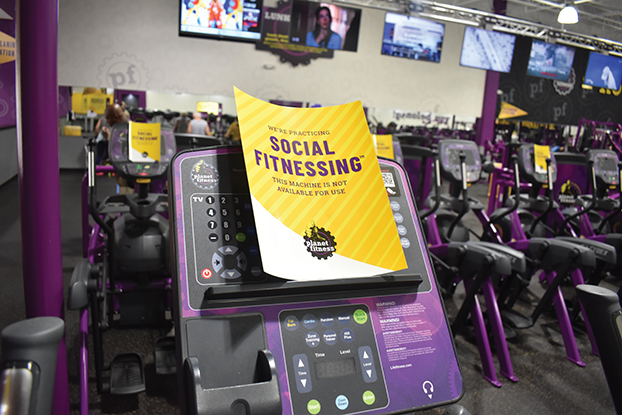 Like many other gyms across the state and country, Planet Fitness has designated every other cardio machine off limits in order to promote social distancing. Ben Stansell/Salisbury Post

SALISBURY — Hours before Gov. Roy Cooper announced that fitness facilities in the state could reopen at limited capacity under his phase 2.5 executive order, Planet Fitness welcomed customers back into its doors on Tuesday morning.

Planet Fitness had planned for weeks to reopen locations across the state on Tuesday, regardless of Cooper’s announcement. The gym chain was citing the medical exemption that other gyms in North Carolina have used to reopen to accommodate those who need exercise for health reasons. But after Cooper’s announcement, that exemption is no longer necessary.

Tuesday was the first time Planet Fitness has been open since March.

“To me, gyms should have been opened weeks ago, months ago,” Corriher said. “It’s an opportunity to work out, get fit, improve your immune system. Plus it’s a local business and businesses need to be opened in order to stimulate our economy. To me, opening this gym is a win-win situation.” 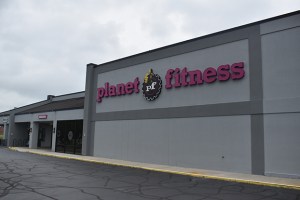 For the first time since March, Planet Fitness in Salisbury opened its doors to customers on Tuesday. Ben Stansell/Salisbury Post

Corriher has been working out at Planet Fitness for nearly three years. During that time, he’s built a community of fellow exercise enthusiasts. On Tuesday afternoon, he was already meeting up with several friends to workout together at the gym while maintaining social distancing practices.

“I have a lot of good friends that I work out with,” Corriher said.

During the months that Planet Fitness was closed, Corriher exercised using some equipment that he had at his house. Along with missing his community at the gym, Corriher missed having motivation and the necessary equipment to work out.

“You can’t motivate yourself at home like you can here, with friends,” Corriher said. “There’s better access to equipment here too.”

Corriher wasn’t the only Planet Fitness patron who was forced to alter their workout routine over the summer. Cindy Corley, who has been going to Planet Fitness since the gym opened on Jake Alexander Boulevard in 2016, began walking nearly five miles per day outside. As temperatures rose during the height of the summer, walking outside was no longer an option.

“As the temperatures increased, my activity level went down,” Corley said. “I’m very thankful that they’ve opened back up, especially with the weather we’ve had around here recently. To have a safe, hazard-free environment to focus on physical health I think is important.”

Like Corriher, Corley was also back at Planet Fitness on Tuesday. Although she was only one of about 12 people who were in the gym at the time, she saw several familiar faces. Seeing only a handful of familiar exercisers might be the new normal for Corley since gyms are not allowed to surpass 30% capacity.

For the Planet Fitness location in Salisbury, that means it can’t have more than 120 people working out in the building at one time. Corley said that she only notices the facility being anywhere close to that busy on Friday nights. She also mentioned that Planet Fitness has unveiled a new app that allows customers to gauge how busy the gym is at any time. This factored into Corley’s decision to visit the gym on Tuesday.

“At the gym today, I don’t think I could’ve reached out to touch anybody if I wanted to,” Corley said. “They’ve launched, on their app, a way to see how crowded it is. It’s not a number but it’s on a bar scale. When I checked it this morning, it was only one bar.” 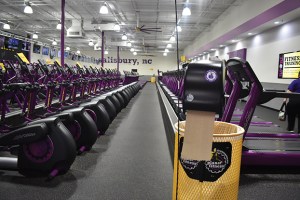 When Planet Fitness opened its doors on Tuesday, customers were met with enhanced health measures, including sanitation stations and a requirement to wear a mask when not actively exercising. Ben Stansell/Salisbury Post

Zachary Horton, the general manager of Salisbury’s Planet Fitness, was excited to welcome customers back on Tuesday.

“We are absolutely stoked. Really, we’re head over heels because we’ve waited so long to provide a sense of community as well as help in this time,” Horton said. “We wanted to be able to provide that to all of our members as soon as possible.”

Planet Fitness provided The Post with a statement saying it looks forward to safely and responsibly getting North Carolinians moving again.

“At Planet Fitness, the safety of our members and team members is our top priority. We are taking a number of steps to protect their health and well-being, which include enhanced cleanliness and sanitization policies and procedures, physical distancing measures in our large and spacious clubs, mask mandates, touchless check-in and more,” the company said. “Using these protocols, we have safely reopened more than 1,500 Planet Fitness locations across the country with 45-plus million check-ins since May 1 and no cases of contracting COVID-19 at the gym. Now more than ever, it’s important to stay active, in order to stay healthy. This is especially important for the many Planet Fitness members in North Carolina who live in underserved areas that do not provide other safe, reliable and affordable options for physical fitness.”