SALISBURY — A China Grove woman found sleeping inside a storage building Friday was charged with breaking into the structure and possession of heroin.

Deputies arrived in the 8900 block of Castor Road and spoke to a woman who told them she was looking after the property for her father who was out of town. The woman found Almond coming from behind a storage building, according to the Rowan County Sheriff’s Office. 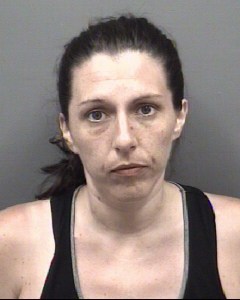 Almond initially told the sheriff’s deputy that she was drawn to the colorful building. She then said she was walking from Novant Health Rowan Medical Center and stopped at that location to find a place to sleep, according to the sheriff’s office. Almond allegedly told deputies there was an air mattress inside the storage building, so she slept there.

The Sheriff’s Office said the deputy found a white substance inside a small plastic bag hidden underneath the air mattress. The deputy seized 1.8 grams of heroin.

Almond remains in the Rowan County jail under a $1,500 bond.