Labor Day golf better than ever 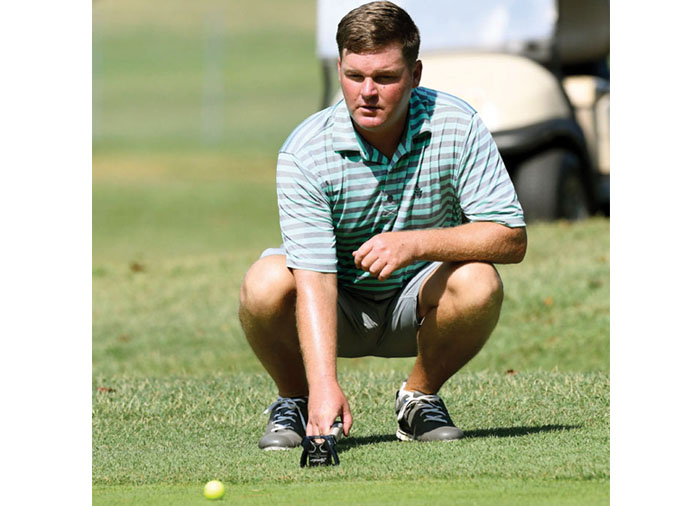 Kevin Lentz lines up his putt in the Horace Billings Golf Tournament. photo by Wayne HInshaw

SALISBURY — The team of Kevin Lentz and John Dyer paced qualifying for the Crowder-Dorsett Memorial Labor Day Four-Ball Golf  Tournament with a sensational 62.

Lentz wasn’t turning cartwheels in the Country Club of Salisbury clubhouse. He was a little upset because that 9-under 62 included a double bogey. A double bogey is a train wreck for Lentz, runner-up in the recent Horace Billings Rowan Amateur.

But are there really any bad 62s?

“Kevin said he and John could have had a good round if not for that one hole,” tournament chairman Jake Alexander said with a chuckle. “I told him I wouldn’t worry about it. What the heck. A 62 is a 62.”

There also was a sizzling 63 by the team of Corey Basinger/Doug McDonald. It came early in qualifying and set the standard until Lentz and Dyer torched the course despite the obstacles of rain and wind on Saturday.

There also were three 64s in qualifying, plus three 65s and a pair of 66s. Those rounds were nothing to yawn about.

“There have been years here when a 66 meant medalist honors,” Alexander said. “That’s a great score, but this year a 66 was on down the list.”

The 16-man championship flight is a who’s who of area golfers, as you might expect. But so are the First and Second Flights. It’s a little scary to see the Ken Clarke/Chris Owen team in the Fourth Flight, after shooting 2-over 73.

How tough is this field?

Well, it actually took a 67 to secure a berth in the Championship Flight. The four teams with 68s had to venture to a playoff to decide the last three spots.  It took seven playoff holes before everything was settled. The team of Alex Earnhardt and Ritchie Fesperman, who was runner-up in this summer’s Rowan Masters, got bumped down to being the No. 1 seed in the First Flight. That was a slim reward for a 68.

There was a lot of discussion around the clubhouse as far as the last time a 68 got snubbed for the Championship Flight.

Clarke and Owen paced qualifying in 2019 with a 64. One team squeezed into the Championship Flight with a 71.

Some 73s made the First Flight a year ago, but this time some 73s tumbled to the Fourth Flight.

So it’s shaping up as one of the deepest and strongest events there’s ever been in a tournament that practically oozes tradition. This is the 67th episode of what is considered the Super Bowl of Rowan County golf. The event is sponsored by Blandy Hardwoods, Caniche, Cheerwine, New Sarum and Novant Health.

In June and July there was still doubt that the tournament could be held at all in this bizarre year of COVID-19.

“We were seriously worried — just holding our breath for a while,” Alexander said. “Things opened enough for us to hold the tournament, but with restrictions. For example, the players can’t enter the pro shop or grill area without a mask. The biggest frustration and the biggest challenge is that we can’t open the gates this year for fans to see the tournament. It’s been eerie looking out on the course and not seeing anyone but the golfers who are qualifying. We won’t have fans on the Monday when the semifinals and finals are held. That day always means big crowds. Those crowds are one of the things that has made this tournament so great.”

Alexander was gratified with the overwhelming response to the tournament — 175 two-person teams registered. That’s a crowded field that was weeded down considerably by qualifying.

“That’s the most entries we’ve had in the last 20 to 25 years,” Alexander said. “One reason is that this is a very smoothly run tournament. Kudos to the club pro, Chad Campbell, and to course superintendent, Ron Bivins. A tournament like this doesn’t happen by accident. They put in a lot of work.”

There are some theories as to why the qualifying has been stronger than usual this year.

Part of it has been a mild loosening of some entry requirements.

Part of it is simply the course.

“It’s in outstanding shape, and that’s a tribute to Ron and his crew,” Alexander said. “A course that’s in great shape will bring out the best in good golfers.”

A factor in the depth of the field is the presence of a number of Ugandan golfers who have come to the United States to study at Livingstone College.

“Livingstone golf  is a member of the Country Club and this is the home course for those players,” Alexander said. “They’re delightful young men and they’ve added greatly to the tournament.”

Alexander also believes that COVID-19 itself has made a contribution to the strong play he’s witnessed in qualifying.

“The virus gave a lot of folks a lot of time to get their games in shape,” he said. “People paid a lot of attention to their golf, and it shows.”

The presence of Nick Lyerly, who has usually been on the course for UNC Greensboro at this time of year, has added some star power to the tournament field.

“Nick is a player who has won the North Carolina Amateur,” Alexander noted. “He has quite a game.”

Lyerly and teammate Eric Mulkey posted one of the 64s in qualifying. They’re seeded third in the Championship Flight.

The Lee Frick/Blake Wray combination won this event in 2017 and 2018 and is seeded fourth after a qualifying 64.

Tanner Bibey, a Catawba College standout who was half of the championship pairing last year, is back with a new partner. He and A.J. Boyd qualified with a 66 for the eighth seed in the Championship Flight.

Charlie Barr, one of North Carolina’s finest junior golfers, is in the field. He and partner Josh Brincefield shot 67, good for the 10th seed in the Championship Flight.

Former Davidson golfer Alex Nianouris was runner-up in the recent N.C. Match Play Championship. He and former Salisbury High teammate, Clark Alcorn, are seeded 11th after qualifying with a 67. Those two helped Salisbury High win a state title by 31 strokes eight years ago.

The 13th seed is also interesting. Former Major League infielder Russ Adams and former West Rowan and Belmont Abbey slugger Seth Waller would be hard to beat if they were whacking baseballs. It’s unlikely anyone is going to outdrive them.

The Championship Flight is so stacked that the team of Keith Dorsett/Ryan Honeycutt, two of the steadiest veterans around, is seeded 15th.

In other words, every team in the loaded Championship Flight has a reasonable chance to claim the trophy.

Stellar qualifying scores also were posted in the Senior (55+) and Super Senior (65+) divisions.

In the Senior Championship Flight, Gary Fesperman/Steve Gegorek led qualifying with a 67. Jim Christy/Jim Hubbard shot 68. The defending champs are the team of Joey Boley/Richard Cobb.

In the Super Senior Championship Flight, the team of Jim Lynch/Grady Summerlin will be out to defend its championship. John Henderlite/John Kyger shot 68 to lead qualifying.

Henderlite will be trying to add a Super Senior title to his championships in the Open and Senior divisions.

There are only four women’s teams entered this year. They played a practice round, and they’ll be on the course for serious competition on Championship Monday. The Yatawara sisters, Lily and Grace, have both won Labor Day titles previously, but they’ll be playing together for the first time in the event.

For Alexander, the memories of Labor Day golf drift back to when he was 10 years old, following the golfers around the course. Those were the days of caddies and 36-hole championship matches.

Alexander felt the thrill of being a Labor Day champion three times, so it’s been gratifying for him to watch the tradition thrive during difficult times.

“It’s nice to see interest in this tournament is still so strong,” Alexander said. “And the level of play has just been outstanding. The golf has been a joy to watch.”

All qualifying scores, seeds, tee times and pairings are in Scoreboard and have been posted online.