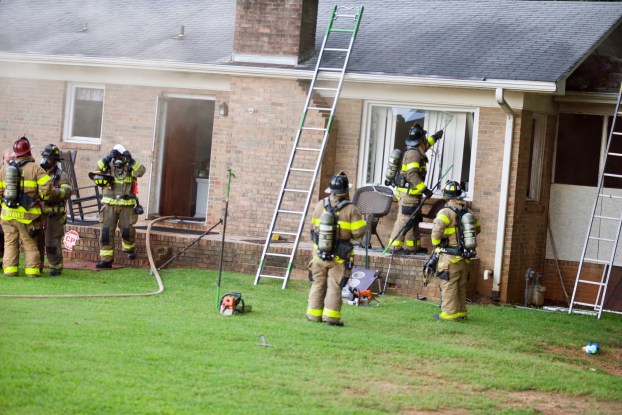 Carl Blankenship/Salisbury Post - The lower floor suffered some heat damage while the top floor was spare the fire, but did take smoke damage.

EAST SPENCER — The cause of a Saturday fire at an East Spencer home where a dog perished remains under investigation.

The home, located at 610 Andrews St., was the home to Providence Baptist Church Pastor Sy Ponds and his wife, Jo. The couple, according to a social media post from family, were home with four of their grandchildren.

Rowan County Fire Division Chief Deborah Horne said the fire began around an electrical outlet in a storage area of the home’s basement.

The Rowan County Fire Marshal’s Office continues to investigate and an electrical engineer has been called in, Horne said.

East Spencer Fire Chief Shawn McBride told the Post the fire damaged a bedroom in the basement and smoke traveled to the second floor. The fire occurred around 7 p.m. and was extinguished shortly after firefighters arrived on the scene.

According to the family member, the Ponds family, which included two of their sons, lost everything. A Facebook fundraiser, Emergency Fundraiser for Pastor Sy Ponds and Family, was created by daughter-in-law Kaylee Ponds.