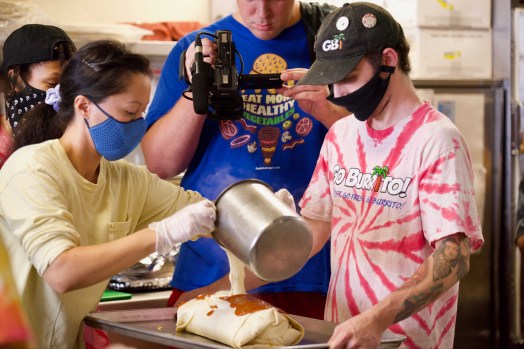 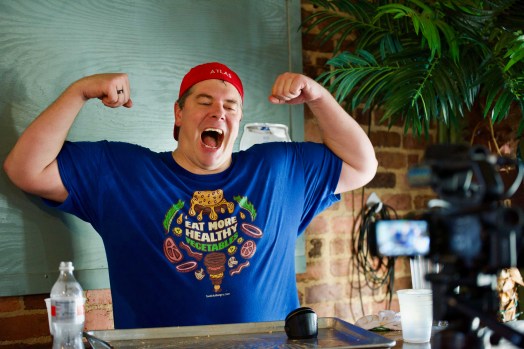 Carl Blankenship/Salisbury Post - Randy Santel after hitting stop on the clock with two seconds left. Santel was going for the record but was happy with the win. He will be taking on another challenge in Boone on Sunday.

SALISBURY — Randy Santel on Saturday added a win to his ever-expanding list of food challenge conquests.

Santel packed away about 6 pounds of burrito, a couple scoops of chips and a steady flow of Diet Coke to finish the challenge at Go Burrito with two seconds to spare on the 30-minute timer. His feat makes him the third person out of 16 to win the Longboard Burrito Challenge at Go Burrito.

It was an unusual event for the restaurant, but a normal day for Santel, who has won 871 of these kinds of challenges and holds a world record. While he was eating, Santel said he did the Go Burrito challenge too close to another the night before. He is headed to Boone today to take on yet another food challenge.

Santel autographed photos and spoke to fans in the restaurant for a few minutes before the challenge kicked off.

A Frankenstein’s monster, the burrito was held together with several tortillas, stuffed with four meats, two sour creams, two types of beans, some vegetables and other sauces. After the burrito unit was assembled, it was doused in enchilada sauce and christened with queso.

Things got started a bit late due to some technical difficulties. Santel is a social media star with more than 1.1 million followers on Facebook and YouTube. And he was a one-man show, setting up cameras and getting photos ready to post with a bit of audience assistance. He live streamed the challenge on Facebook and plans to post a more polished version with footage of cheering crowds on YouTube.

Santel was set up on a small stage on the second floor at the restaurant. There was not much room or clearance for him to sit and fit his equipment on stage, but he was prepared with kneepads and did the entire challenge kneeling.

The packed room was filled with cheers for Santel when he went for major bites or seemed to be struggling. He started off using a serving spoon to disembowel the oversized burrito, which quickly turned the baking sheet it rested on into a war zone of ingredients. Then he lifted it and went in for some handheld bites. About two thirds, or four burritos, into the challenge, Santel started to struggle and slowed down, but caught a second wind and made some major bites to finish off the challenge.

Santel said the Go Burrito challenge was difficult because it was limited to 30 minutes, though he has eaten more during challenges with longer time limits. The value of the meal is $35. If you win, you eat for free, get a T-shirt and a spot on the wall of fame.

Go Burrito owner Mikey Wetzel said the challenge is something the restaurant does for fun. Wetzel described it as a difficult-enough challenge because only three people have finished it.

“Of the two people before Randy who have beat it, they’re not happy afterwards,” Wetzel said. “It’s not something that people would be like, ‘Oh I can beat that challenge. I’m going to go anytime I want. I’ll go eat for free.’ That’s not something normally are willing to do to their bodies.”

Santel said he thinks the appeal of these contests is the just the challenge of doing so.

“What’s special about climbing a mountain?” Santel said. “Not a whole lot, just being able to do it.”

Santel won a national body transformation contest sponsored by Men’s Health in 2010. After he won, a friend asked him to join a 28-inch pizza challenge in his hometown of St. Louis. They won $500 cash. A month later, he tried again and won the challenge for another cash prize.

“I just started looking at all these other food challenges and everything grew from there,” Santel said.

More than 10 years into doing food challenges, Santel said he is used to the process by now. He was initially going for the 27-minute record for the Go Burrito challenge but was happy with the win.

Local Ken Small said he has known of Santel and followed him off and on for the previous few years. He wanted to see what it was like to see him do a challenge in person.

“It’s just the amount of food that he can shove down his gullet,” Small said.

Go Burrito employee Spencer Furr helped walk the burrito upstairs. He said he first heard about Santel a few days ago and his cousin is a fan. He now officially counts himself among Santel’s fans.