Football: Former Catawba star Hubbard is still in the game 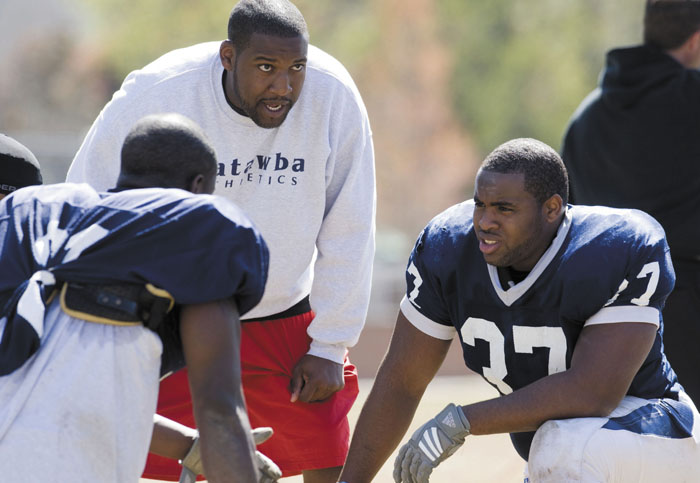 LOCK HAVEN, Pa. — From the most humble of beginnings, All-America careers can grow.

Catawba head coach David Bennett had constructed a powerful football staff and a mighty football program in 2000. The Indians’ defense was anchored by two of the stoutest linemen the program has ever had — DeVonte Peterson and Radell Lockhart. They were backed by one of the fiercest, toughest groups of linebackers in program history — Darris Morris, Shawn McBride, Todd McComb and Shawn Sanders.

Into that mix came a freshman from Raleigh named Khanis Hubbard who was expected to follow in the giant cleat-prints of Peterson and Lockhart.

Hubbard was one of the handful of true freshmen to make Catawba’s travel squad in 2000, but then he struggled to find his footing.

“I was a little awestruck, to say the least,” Hubbard said. “Our first game was Livingstone, and we won big, but I thought those Livingstone linemen were the biggest, strongest, most athletic people I’d ever seen. I got to play a lot, but I didn’t do anything. I didn’t make a single play. Not one play. If I had any stats for that game they were strictly JOPs. That’s jumping on pile.”

Catawba’s great defensive line coach Jim Tomsula watched Hubbard’s film and saw the glass as half full. He told Hubbard he was going to be fine. Hubbard wanted to believe him.

The third game of the 200 season was Wingate, the first South Atlantic Conference contest.

Tomsula told Hubbard 20 times during Wingate week that this was going to be his game.  This would be his breakout. This would be the day everything slowed down and he could play instead of think.

Tomsula was proven to be a prophet. There was a successful blitz by one of those lethal linebackers, a crunching hit, a caused fumble, and suddenly Hubbard had the defensive lineman’s dream — a touchdown.

“I wasn’t doing anything on that play, but then the ball pops free, and I’m right there,” Hubbard said. “I returned it 14 yards for a touchdown. I look over on the sideline and Tomsula has his hands up in the air and has that ‘I told you so’ grin on his face. That was an easy play, but it really was big for me. From that day on, anything Coach Tomsula said, I believed him. And Tomsula was one of those coaches you’d run through a brick wall for.”

Hubbard’s father, James, had good jobs and worked for IBM. The Hubbards lived in Houston and then Johnson City, Tenn., before settling in Raleigh when Khanis was 11 or 12.

Hubbard attended Enloe High School. It was definitely a basketball school, and he liked basketball.

“I played with (Maryland’s) Chris Wilcox and (N.C. State’s) Mike Bell and (Texas Southern’s) Allan Lovett and some great players,” Hubbard said. “We played against (Duke’s) Chris Duhon in a holiday tournament and we played against (Duke’s) Shavlik Randolph. I enjoyed basketball, but I saw enough outstanding players to know I wasn’t very good. I played in front of a whole lot bigger basketball crowds than I deserved to play in front of.”

On the football field, Hubbard played linebacker and on both lines during his middle school years.

His high school career had a humorous start.

“First day of tryouts my freshmen year, we’re in the gym, and the coach says for all of the offensive linemen to go over there, and those guys all looked so huge,” Hubbard said. “Then he says for all the defensive linemen to go over here, and they looked equally huge. He goes through each position until there’s just one guy still standing there who hasn’t gone anywhere. That guy is me. Coach told me to come with him. He put me with the fullbacks.”

Hubbard blossomed. He was a rugged 6-foot-3 defensive lineman by his senior year.

Catawba had the inside track on recruiting him. Assistant coach Chip Hester had gone to Millbrook High, one of Enloe’s rivals and neighbors (7.5 miles away).

“Every Wednesday night for 15 straight weeks, Coach Hester called me at 7:30 just to see how I was doing,” Hubbard said with a laugh.

Hester gets half the credit for recruiting Hubbard. Give the other half to linebacker Steve McKnight.

“McKnight’s arms were huge,” Hubbard said. “I’m watching him closely in that PC game, and something went wrong with his helmet, and he’s got his helmet off when the play starts. With his helmet off, he still meets the running back in the hole and makes the tackle — and I’m sold on the Catawba Indians.”

After that slightly shaky start to his Catawba career in 2000, Hubbard came on strong. After getting that first fortunate touchdown against Wingate, he made his second trip to the end zone five weeks later when the Indians crushed North Greenville on a homecoming Saturday, 55-0, to become the first Catawba team to start a season with a 7-0 record.

Catawba finished that year 11-1, with an upset loss at home to Delta State in the second round of the playoffs. Catawba Mitch Ellis had passed for 380 yards in the first round, but the Delta State game was played in abysmal weather conditions, and Catawba’s normally potent passing game was 4-for-13 for 47 yards.

Peterson went down late in the season with a broken ankle, which led to an important conversation between Lockhart and Hubbard.

“He told it was my time and the team needed me,” Hubbard said. “I was young and I definitely wasn’t ready to replace DeVonte Peterson, but I had learned a lot from Radell and from him and I showed up every day and did my best. That was a turning point for me.”

While Hubbard’s freshman stats were modest — except for the two TDs — he quadrupled his tackle total as a sophomore. One of his three fumble recoveries came in the national semifinal loss in Michigan to Grand Valley State. That was the last game Bennett coached at Catawba. Bennett, defensive coordinator Curtis Walker and other staff members headed to Coastal Carolina to start the program there.

Hubbard was even greater as a senior when he had 12 sacks, one of the biggest single-season totals in school history, and posted 24 tackles for loss while serving as defensive captain. He made All-SAC and All-Region and several All-America teams. That Catawba team went 9-2 and 6-1 in the SAC but was surprisingly left out of the playoffs. Hubbard’s last game for the Indians turned out to be a home victory against Lenoir-Rhyne.

“We had good teams and I had good games, but I remember the bus rides with the guys a whole lot more than the sacks,” Hubbard said

He was as popular as he was productive, serving in student government and presiding as homecoming king as a senior.

He played in the Cactus Bowl All-Star Game in Phoenix along with Catawba DB Jamel Jackson. He was considered a potential late-round draft pick or at least a free-agent signee, but he didn’t get an NFL opportunity.

So he decided to finished his degree in communications. He graduated in 2004 and quickly made a transition to being part of Hester’s coaching staff.

“I was not one of those people who grew up wanting to be a teacher and high school coach because there wasn’t a subject I had a passion for teaching,” Hubbard said. “But then I learned from some great men at Catawba that there could be an opportunity for me in college coaching, where all I was teaching every day was football. Football is what I had a passion for, so it was a perfect fit for me. I always loved the game and the more I learned about the game, the deeper I dug into it, the more I loved it.”

He coached defensive lines at Catawba through 2012 when Walker replaced Hester as head coach. He also got experience as a recruiter and video coordinator.

He had a number of prize pupils with the Indians, including All-American Ron Ellington, Brandon Sutton and Melquan Fair.

“I had a lot of proud moments as a Catawba coach,” Hubbard said. “That’s why you coach, really, to see your guys succeed, to see all those long hours they put in over the summer paying off for them. Once in a while, you even get to see them score a touchdown.”

Hubbard embraced a new challenge in 2020, when he was hired in April as one of a number of new staff members at Lock Haven, a Division II school in Pennsylvania. No one knew quite how challenging 2020 was going to be for football coaches in April, but the delay to start of the season — Lock Haven hopes to play games in the spring — has given Hubbard a chance to settle in. He’s watching film, he’s getting to know the team and he’s figuring out recruiting opportunities. The bulk of Lock Haven’s players are from Pennsylvania, but the Bald Eagles also get some from New York, Maryland, New Jersey and Washington, D.C.

“I was hired by Lock Haven as recruiting coordinator and also as defensive backs coach,” Hubbard said. “It’s exciting because I’ve never coached just the guys on the back end before. Every position I’ve coached, I’ve learned a lot of things. When you’re a defensive coach, you think you understand what offenses are trying to do, but then when you’re an offensive coordinator, you learn there’s a lot that you didn’t know about offense.”

“If a head-coaching opportunity comes along one day, I’ll be prepared for it,” Hubbard said. “But all that matters right now is that I’m coaching  football, doing exactly what I want to be doing. Every day there’s an opportunity for me to work with 125 young men. Every day is an opportunity to have a positive impact on their lives.”