MOUNT ULLA — Thursday mornings have been a lot busier this year for Jessica Evans and her family.

The morning starts early, when Jessica, her husband Matt, their two daughters and a couple of part-time workers gather behind their white farmhouse, under the awning of a red shed.

Every member of the family has a role to play on processing day. Matt is stuck with the most unpleasant job, killing and draining the broiler chickens that are ready for harvest. Jessica, the cleaner and feather plucker, has become a master of her station. She can pluck four chickens clean in 30 seconds.

Their daughters, both under 11 years old, remove the heads and feet of the birds. The family and their workers operate separately, but as one cohesive unit. At the end, they all get together for a group quality control inspection, checking out the birds that will soon be eaten on dinner plates throughout the Charlotte region.

In total, about 100 chickens are processed every week. Last year at this time, the Evans family was processing 100 chickens every other week. That was before COVID-19 shook people’s faith in the food system and particularly in large-scale meat-packaging facilities. With news reports detailing unsanitary and unsafe conditions in these facilities, some people began to look more locally for their pork, chicken and beef.

That was good news for Jessica and her family.

“It was pretty nuts. Last year we did, if you count turkeys, we did about 1,800 head of poultry,” Jessica said. “We just sold out of that toward the end of December and January. This year, until July, we processed 100 head every week and we sold out after three days.”

Like most people, Jessica hadn’t foreseen the pandemic coming. If she had, she would have bought more chickens. Jessica and her family decided years ago that they wanted to raise chicken and other meat livestock in an ethical, sustainable way.

Four years ago, the Evans family bet on a farm in Rowan County. They packed up their belongings and their lives and moved from southern California to the 10-acre plot of land where they live in Mount Ulla.

This year, that bet has looked like a wise investment.

The first time Jessica and Matt harvested and processed chickens, it took them six hours to finish 20 birds. They’d raised the birds in their backyard and had borrowed rudimentary processing equipment from their friends to complete the job. They were living in southern California and were beginning to test the waters of an agricultural lifestyle. Jessica had, for as long as she can remember, been interested in growing and raising her own food and the health benefits that came with it. It was a mindset instilled in her by her mother.

“I grew up with my mom doing therapy for cancer. She got it when I was about 6,” Jessica said. “She was a huge believer in healthy sources of food and growing food when you can. We always did. We had our backyard egg layers and our garden and we had some goats for a bit.”

It was those early memories with her mother that influenced Jessica and Matt to begin their indoctrination into backyard farming. It started with Matt’s home garden, but soon included egg-laying chickens, meat chickens and goats, all on two acres of land. Once they started, they were hooked. At about the same time, as they were beginning to raise their two children, they decided that they wanted to leave California.

“We knew we wanted to leave California,” Jessica said. “But it was just about where and when.”

With an entire country to choose from, they began researching possible destinations.

“You know, as farmers, we could kind of have thrown a dart at a map of the United States and picked a place,” Jessica said. “We kind of settled on the Carolinas.”

That dart eventually found its mark in North Carolina. The Asheville area was a possibility, but Jessica jokes that they “weren’t cool enough” for the trendy town. Not to mention the terrain with more hills  would present its own set of farming challenges. Access to Charlotte and the availability of good land eventually led the Evans family to Rowan County and Mount Ulla.

Rowan County has a storied agricultural history. With 24 farms being listed as century farms with the North Carolina Department of Agriculture, Rowan County is rich in farm families that have tilled the ground and tended livestock for generations. When Jessica and Matt moved in from California, they were immediately the new kids on the block.

Jessica and Matt never wanted to be conventional farmers. From the onset, they were believers in regenerative agriculture, which are farming and grazing tactics that focus on rebuilding and improving the biodiversity and health of soil.

As new farmers, they didn’t have generations worth of farming knowledge to lean on when they got to Rowan County. Instead, they developed that knowledge for themselves by reading farm blogs, visiting other like-minded farmers and through plenty of trial and error.

“We chose farming as a lifestyle,” Jessica said. “It’s not something we inherited from our family. There’s life lessons we hoped to pass onto our kids through that.”

One of the main components of regenerative agriculture is constantly moving grazing livestock around fields to ensure that the grass and soil receive nutrients but aren’t overgrazed. To do this, Matt, a working electrician and all-around handyman, created moveable chicken houses, sometimes called chicken tractors.

The methods and technology Matt used to create their chicken tractors has led to innovation not only on their farm, but on farms throughout the state.

“As a small flock producer, especially of pasture-raised chicken, their chicken tractors are some of the best designs that we’ve seen regionally,” said Michael Fine, a Rowan County Cooperative Extension agent who has worked with the Evans family. “They’re very lightweight. They’re good with establishing methods for ergonomics and thinking about their own personal bodies having to pull the tractors. It’s cool that it’s in Rowan County because I work with extension colleagues across the state and I’ve sent them tips from the Evans’ farm that I think have been duplicated in other parts of the state.”

The family’s farming practices make them stand out in Rowan County, where many of the commercial farms use a more conventional style of agriculture. They’re also from California, which comes with its own stigma.

Although their practices differ from many of the farmers around them, Jessica said they’ve been largely embraced by the Rowan County agricultural community, even if they still get needled for being from the West Coast from time to time.

“We’ve been big on being receptive to learning from everybody. Our neighbors across the street are more conventional farmers,” Jessica said. “They’ve been super helpful. They’ve tilled my grandfather’s garden or I’ll say ‘Hey, I need to fix this high tensile fence. Can you help me figure this out?’ You know, we’ve learned that even though people farm differently than we do, there’s plenty to learn from everybody and everybody needs to make a living.” 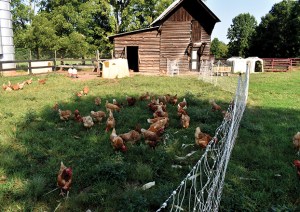 Raising chickens humanely by allowing them to pasture freely is a major part of the Evans Family Farm identity. Ben Stansell/Salisbury Post

Jessica has formed a close relationship with Amy Hoffner Poirier, a sustainable agriculture professor at Mitchell Community College in Statesville. Poirier and her husband live on a nearly 100-acre plot of land just a couple of miles away from the Evans Family Farm. Poirier and Jessica met at a conference and have remained close friends. When Poirier was looking to learn more about regenerative agriculture, she reached out to Jessica for advice. Their relationship soon became mutually beneficial.

“I’ve always had an interest in livestock, but I don’t have time to direct market or anything like that, but I do have acreage,” Poirier said. “In a conversation with Jessica, she doesn’t really have that acreage to leave some larger livestock out to graze, but we do.”

Poirier offered her land to Jessica and a deal was struck. Poirier would learn regenerative agricultural practices from Jessica while raising the Evans’ herd of pigs on land where they can roam more freely. Of course, Poirier will also be paid for her help.

Forming bonds like this with nearby farmers has been critical to the Evans family’s success. But it’s been what Jessica has done outside of the field that has led to their recent boom in business.

Two years ago, Jessica launched the Evans Family Farm website, which she created from scratch. Never interested in selling wholesale, Jessica and Matt were determined to grow their business through direct marketing to meat and egg consumers in the Charlotte region.

“We had a website that I’d built by myself and we could definitely tell that ecommerce was where everything was headed and we wanted to have a platform for that,” Jessica said.

Since then, they’ve partnered with tech company Barn2Door to improve their website’s online shopping experience. Having an online presence paid dividends this spring when people who were worried about safety and access came looking for local sources of protein.

“When people started to see empty grocery shelves and started panicking a bit. A lot of people have wanted to find local, they just never sought it out because of convenience,” Jessica said. “Hopefully it exposed faults in our food system for people. When you bottleneck into a few major food corporations and some really unsanitary working conditions, that’s what’s going to happen.”

Along with selling their poultry, pork and beef products online, some goes to a farmers market in Charlotte. Jessica even delivers online orders out of her minivan.

“On Wednesday afternoons I use my minivan,” Jessica said. “I take all the seats out and put all the coolers in and we make it work for now.”

When people ask Jessica how they process their chickens, she can quell their concerns by telling them that they did it right there on the farm, out in the open. She can even invite them to watch. 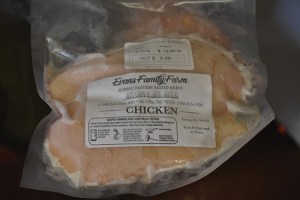 The chicken raised and processed on Evans Family Farm is pasture-raised and supplemented with a locally-grown, non-GMO feed. Ben Stansell/Salisbury Post

“From 2015 up until now, having something stateside that was able to take these small flocks of 100 birds at a time, that option was closed,” Fine said. “Farmers had to go down to South Carolina or go as far away as Ohio.”

Last year, the Evans family processed chickens for other small-scale farmers, but they recently had to cut that out in order to meet the increased demand for their own chickens.

Jessica said that the demand for their chicken has diminished somewhat in recent weeks. However, she thinks that the interest in locally grown, humanely raised meat will continue to flourish.