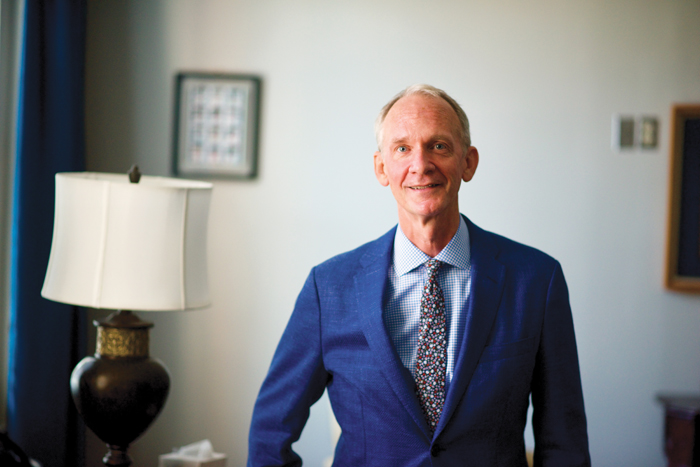 SALISBURY — David Nelson didn’t have a favorite subject in high school. He described himself as a disinterested student who teachers would have seen as lacking motivation.

The difference for Nelson, Catawba College’s new president as of July, was a bit of individual attention from two high school teachers. They pushed him and saw something in him worth stoking. He points to those challenges as what pushed him to become the first person in his family to go to college.

Those educators taught anatomy and world literature. Nelson said those teachers made him better and, in some sense, he has spent his career mimicking them. What made the difference was challenging, individual attention. He said things finally began to “click” for him in graduate school.

That individual attention is something he’s found in small institutions like Catawba — something he knows a thing or two about. He earned bachelor’s and master’s degrees in music from Hardin-Simmons University and a doctorate in theology from Southeastern Baptist Theological Seminary.

Nelson has a long career in education. He now serves as an administrator, but says he’s a teacher at heart and thinks almost every day of being back in a classroom full of students.

Catawba College announced Nelson as its new president in April, replacing outgoing President Brien Lewis, who chose not to seek a renewal of his contract. Lewis now leads Transylvania University — located in Lexington, Kentucky. Nelson’s first day was July 1. Nelson says the mission of Catawba as a small institution providing liberal arts and education rich with personal attention resonates with him.

Before he became president of Catawba College, he was president of Massachusetts College of Art and Design. He was provost at the University of North Carolina School of the Arts before that.

Nelson grew up moving. His father worked for Nestlé, the largest food company in the world. And moving to a new city usually accompanied moving to a promotion for his dad. Nelson said his father was promoted often. So, he moved often.

His childhood took him from Texas to Colorado, but he spent most of his adult life in North Carolina, working in the Triad and Triangle areas. He said the return to North Carolina felt like a homecoming for his wife, Kimberly, and himself.

“We could not be happier that we found our way back,” Nelson said.

Nelson said theology is the most formative influence in his life. He had an interest in the subject from a young age, but music was something he was driven to do. It was his path into college, too. He shares that passion with his wife.

He was a brass player and a vocalist, but found his way into conducting.

“A conductor, at their best, is the person who is enabling a group of musicians to do what they love, and to do it in a way that is a real joy,” Nelsons said.

Education, he says, is an opportunity to see imagination come to life and watch the lives of students transform as they realize their own potential. And an education at Catawba College, in particular, has personal attention at its core — something he says is especially necessary during the COVID-19 pandemic.

“That’s really necessary right now for every college and university — it just happens to be a thing that’s at the core of the Catawba identity,” Nelson said.

Nelson said the most challenging part of the national COVID-19 crisis is uncertainty about how the pandemic ends.

“As humans, we all have different levels of comfort with ambiguity and uncertainty,” Nelson said. “This is a case where we just have lots of uncertainty.”

Nelson said the college’s opportunity now is to guide people through the uncertainty.

Under normal circumstances, Nelson likes to travel with his wife, and he describes most of his activities with “we” instead of “I.” The couple, he said, like to read, write to keep up with their disciplines and stay engaged in the arts. Nelson said he and his wife can be found at local exhibitions and, when normal contests happen, at sporting events as well. The couple has three adult children and two grandchildren.