Baseball: Ballard’s senior season one for the ages 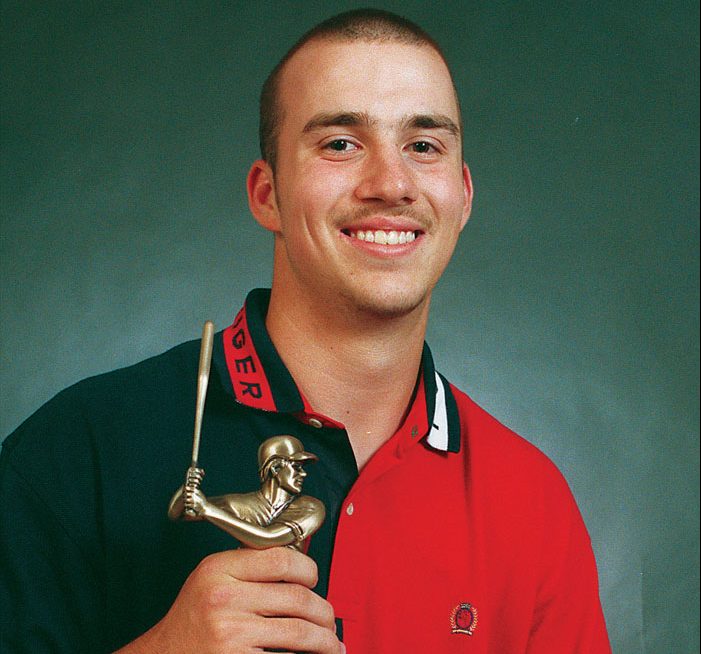 HUNTERSVILLE — Larry Ballard’s 1996 baseball season for South Rowan has been viewed over the years as the strangest and most curious of anomalies.

After all, how does a guy who didn’t start until his senior year, suddenly bat .507, make a shambles of a tough 4A conference and lead his team to 23 wins, a school record that still stands?

But Ballard was no overnight sensation. There was a lot of sweat behind the amazing fairy tale that played out with one line drive after another across the diamonds of the Central Piedmont Conference.

He did the extra work to prepare for his moment. When it finally arrived, he seized it and wouldn’t let go.

Twenty-four years later,  Ballard’s communication with his teammates is mostly through Facebook, but the memories remain, the record books are still kept, and the Mark Norris Memorial Award he owns is a reminder that for three glorious months he was about as good as anyone has ever been in the county.

“I really think if I’d played home games in a normal park, I would’ve hit 12 to 15 homers that year,” Ballard said. “I was a lefty hitter, and it was 365 feet down the line in right at South and 395 to right-center. People ask me why I didn’t hit more homers (he had five homers and 10 doubles in 27 games), but it’s not like I had a short porch to shoot for. I hit a lot balls hard. I didn’t realize it at the time, but I was told later that I only struck out once that season. I  never had a slump. That season and the player of the year award for Rowan County, when you consider the guys I was competing with, is something I’ll always cherish.”

Ballard’s father was a teacher, coach and athletic director, who had been an athlete at Wingate and was heavily involved in slow-pitch softball.

An only child, Larry was virtually the spitting image of his father, tall and rangy, a good athlete.

“My dad would take me to the Kannapolis Legion games because he wanted me to see guys like Maurice Blakeney play,” Ballard said. “I asked him once at a game if I could walk around a little bit with my friends. He told me I wasn’t there to socialize, I was there to learn by watching the good players.”

Ballard was in that summer between middle school and high school when he first encountered Dwayne Fink at a batting cage complex in China Grove. Fink was South’s jayvee baseball coach. Fink offered a few tips, but he saw enough of Ballard’s swing to know he might not ever have him. He might play for the varsity right away.

But Ballard had the worst day of his life the first day of tryouts as a freshman, barely made contact with a baseball. He wound up playing jayvee ball for two full seasons. South was a big school with plenty of athletes and plenty of options.

His junior year, Ballard finally was on the varsity. That was a good South team coached by Ernie Faw. It made the 1995 4A state playoffs. Travis Billings, a burly football lineman, held down first base, Ballard’s primary position, and had a nice season for the Raiders, batting .345 with 17 RBIs. Billings was South’s third-best offensive player behind all-county outfielders Brian Burchette and Phillip Duffell.

Ballard believed with all his whole heart he was ready to be in the lineup, but he went 2-for-17 in his limited chances. That made it easy to keep him chained to the bench.

Ballard was down, but he recovered his confidence in the summer of 1995, playing for Kannapolis Legion. This was the last year before South Rowan started fielding its own Legion entry, and Kannapolis usually got a nice boost from the South Rowan players.

“When that Legion season started, I was the No. 3 first baseman,” Ballard said. “Then I pinch hit in a game down at Albemarle and hit a three-run homer. I was in the lineup after that and batted around .400 for the summer.”

Travel ball was in its infancy, but as a senior in high school, Ballard played on a team in the fall of 1995 that Charles Welch organized. Playing with Rowan, Charlotte and Forsyth players, Ballard was an all-star.

He’d given up basketball by then and was thinking baseball 24/7.

“Basketball was definitely the first love for me, but there was a game in high school where I boxed out West Rowan’s Chavis Cowan and he still jumped six inches over me,” the 6-foot-2 Ballard said. “That was one of those moments. I started focusing on baseball.”

Ballard went to a Duke baseball camp over Christmas break, along with South teammates such as Kevin Deal and Burchette.

“One of the coaches speaking at the camp had professional experience and told us that if we weren’t taking at least 200 swings a day we weren’t serious about making it in baseball,” Ballard said. “So then I started swinging every day, looking at my swing in the mirror, looking at my swing in glass doors. My dad worried that I was going crazy, but all those dry swings I took made a difference.”

As his senior high school season approached, Ballard and many of his teammates were at the South field every Sunday, hitting, fielding and throwing on their own.

“I did everything I could do to get ready for my senior season,” Ballard said. “I did the extra.”

The new varsity coach was Fink. That put Ballard in a comfort zone. Fink had watched him hit a ton for the jayvees.

“Fink was a great teacher and I believe that’s what made him a great coach,” Ballard said. “He knew how to motivate. He was positive. That doesn’t mean he never yelled at us, but when he yelled, there was a good reason for it. When he told me he was counting on me to bat third, my confidence soared.”

Ballard recalls going 0-for-0 on opening day in 1996. He walked four straight times.

Then there was an early-season speeding ticket.

“Just being young and stupid, but it actually motivated me,” Ballard said. “That ticket made me re-focus.”

Then Ballard got dialed in.

“In the Easter Tournament (the Cliff Peeler Baseball Classic), I hit a little popup in foul territory, but it had just started raining, and the catcher dropped it,” Ballard said. “I got a second chance, and the next pitch, I hit a three-run homer. Things like that happened for me. Everything fell into place for a magical season.”

Ballard’s approach was simple. Hit the first fastball. Most high school pitchers couldn’t get ahead of him with a breaking ball. Most tried to hit a corner with a fastball on the first pitch.

“Inside or outside, I didn’t care,” Ballard said. “If it was a first-pitch fastball, I was swinging.”

Ballard got hot and stayed hot, but there still wasn’t much pitching around him.

South had a loaded lineup, an experienced group of seniors, backed up by juniors, who had been undefeated as jayvee sophomores. Center fielder Kevin Sides and shortstop Nick Farmer normally hit in front of Ballard and had speed. Cleanup man Kevin Deal, the third baseman, hit behind Ballard and led the county in RBIs with 37.  Deal walloped two grand slams in one week.

When South swept a doubleheader from Davie — 10-4 and 8-5 — the Raiders got a homer and an avalanche of hits from Ballard. That clinched a tie for South’s first conference championship since moving up to the 4A ranks in 1985.

A loss to Mount Tabor ended the regular season and the winning streak.

South’s 22nd win, to break the school record, came in the CPC semifinals. That was a 10-4 victory over West Forsyth. Ballard went 3-for-3 with two doubles, as his average climbed above .500.

South’s playoff appearances were bizarre. Both of South’s playoff games were two-day soap operas — one suspended by a power failure, the other by lightning.

South pulled out a slugfest in the first one.

South didn’t win the second one. After a lightning suspension on a Friday with a 3-all score with Grimsley, the teams returned to the South field on Saturday morning at 11 a.m. Grimsley won 8-5. South had the bases loaded in the seventh, but couldn’t get the hit it needed. The season was over at 23-4. Ballard finished at .507.

The county was tough in 1996. West Rowan, the fourth-best team, made the state playoffs.

North Rowan enjoyed a historic season, and Cavalier pitcher Ryan Sharp was honored as the Yadkin Valley Conference Player of the Year.

East Rowan wasn’t the powerhouse it had been in 1995 when it won the 3A title, but it was still good enough to take its conference. Chris Chandler, a pitcher/slugger who had transferred from Salisbury put together a banner year.

“Chris had gotten my phone number and the last few weeks of the season, he was calling me after every game to see how I did,” Ballard said.

The Mark Norris Memorial Award came down to Ballard and Chandler. Ballard got the nod on a 5-4 vote after the league’s coaches and the Post’s sports staff was polled.

Ballard was South’s first player of the year since Paul Meckes in 1988.

“I like to think that when I got the opportunity, I was ready for it,” Ballard said. “I was ready because I’d done all of that stuff that nobody ever saw.”

Ballard signed with the Charlotte 49ers.

“They had James Matan at first base, and he was an All-American,” Ballard said. “I figured I wouldn’t play for two years there, so that’s why I transferred to Carson-Newman.”

He has good memories from Carson-Newman. He got to play a lot at first base, third base and left field for three seasons and was part of the 1999 Eagles team that won the South Atlantic Conference and Southeast Regional and made it to the Division II World Series.

“I remember (East Rowan and Catawba’s) David Trexler coming up to Carson-Newman one year and hitting five or six homers against us in a series,” Ballard said. “Those East guys, those North Rowan guys, I played against them in high school and in Legion and in college. Good rivalries.”

Ballard’s father died when Larry was 25. That knocked him back for a little while.

He’s worked as financial advisor or financial planner since he got his degree from Carson-Newman.

“My dad was an educator and now I’m really in the education business myself,” Ballard said. “Educating people as far as saving money, being smart with money, making smart investments.”

Ballard is engaged to be married, so he’s got some life changes to look forward to.

He stays busy. When he’s not consulting on finances, he provides hitting instruction through Future Stars Baseball Academy in the Lake Norman area. That’s been rewarding.

Back in 1996, Ballard was one of those kids who became really good. He made a lasting mark for a team that set records.

“We did have a great team — we had guys on the bench who would have played for most schools,” Ballard said. “And we had fun. I’ll never forget how much fun we had.”