Quotes of the Week

—  Shon Barnes, deputy chief of the Salisbury Police Department who is leaving for a position in Chicago

“We’re still in the process of adjusting to the new safety measures, but even with the safety measures in place, I am so thankful for the opportunity to come back together physically and build deeper relationships with my students.”

“Let’s not kid ourselves, everybody has some level of anxiety.” 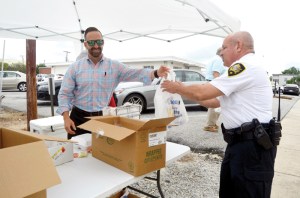 Matt Staton of Powles Staton Funeral Home in Rockwell hands a boxed lunch to Capt. John Sifford with the Rowan County Sheriff’s Office. This is the sixth year the appreciation lunch was hosted by the funeral home. This year was a drive-through to minimize contact. The food was prepared by some of the staff from the Rowan County Register of Deeds. Shavonne Potts/Salisbury Post

“Given the constraints of COVID and the profoundly divisive language we’ve endured from top elected officials over the past four years, the speeches from Republicans, Democrats and everyday people left me feeling inspired and hopeful.”

“We were competing with a couple of other existing facilities. For them to come back to us with another expansion says a lot about Rowan County.”