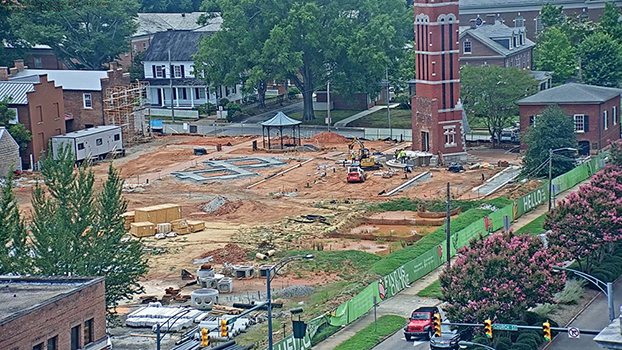 Photo submitted This image shows an aerial view of progress at Bell Tower Green Park as of July 24.

SALISBURY — There was something in the Wrenn House that Taylor Hutchins could not explain.

Carrying a camera and energy-detecting equipment, Hutchins was exploring the upstairs of the old house one night in August 2019 when he spotted something in the window.

“On the window that looks out to the library, myself and two other people were walking around upstairs,” said Hutchins, the co-owner of DKM Media Group. “We looked out the window where people had seen this silhouette or figure of this girl. We never saw it, but I saw a handprint on the window. I instantly asked who put it there.”

Hutchins is skeptical by nature. So he immediately tried to disprove what he saw.

“I instantly asked who put it there,” Hutchins said. “We looked at it and it was actually inside the window. Nobody was able to explain it.

Hutchins won’t say that he had a supernatural encounter in the building, but he still hasn’t been able to wrap his head around what he saw.

An expert in digital media, Hutchins paired his knowledge of cameras and technology with his passion for surveying new places when he was in college at Gardner-Webb University.

“I’ve always been interested in exploring,” Hutchins said. “When I was little, I loved Indiana Jones and the idea of adventure and doing that type of stuff. Knowing that it’s not real life, I kind of looked for adventure in other ways. I stumbled on Ghost Hunters, the TV show. I was looking at what they were doing and I started doing my own research.”

Hutchins bought some of the standard ghost hunting equipment and started by roaming around old dorms on campus. Then he took the equipment to a theater in nearby Shelby.

“We went to an old theater that had been renovated there,” Hutchins said. “Supposedly, when things are being renovated, there is allegedly a higher level of activity. With that, they were in the middle of a renovation and we were able to find some stuff and communicate with it, I think.”

Hutchins has continued to navigate through old buildings with his equipment, a K2 Meter and a thermal camera, including the Empire building in downtown Salisbury. He’s never been keen on wandering through graveyards, but he was interested in checking out the Wrenn House. He approached Jason Walser, vice president of Bell Tower Green, about exploring the building after researching it in the history room of the Rowan County Library.

“I did a little research beforehand,” Hutchins said. “One of the things that I read there was supposedly a haunting of a little girl there. She was supposed to be there in a white dress, which is typical. Wherever you go, you see that.”

The Wrenn House was built in the early 1800s as a female academy by the First Presbyterian Church and was used as a school for some time. Most recently, the building housed several different restaurants. It is currently undergoing renovations, and Walser said that it will most likely be a site for another restaurant in the near future.

Whenever Hutchins enters a structure like the Wrenn House with his equipment and crew, he’s doing so to debunk concerns over supernatural activity.

Hutchins’ trip through the Wrenn House left him with more questions than answers. He’s not the only one who has had an unexplainable experience in or around the building.

As workers have continued to develop the site around the Wrenn House into Bell Tower Green park, they’ve been spooked by events they can’t explain. Earlier in August, when a construction worker was eating his lunch behind the Bell Tower, he felt a hand grip his shoulder. He turned around expecting to see a coworker standing over him.

“Somebody grabbed him on his shoulder and he turned around, but nobody was there,” said David Vincent, the site supervisor for David E. Looper and Co. “He assumed it was his workers on the other side messing with him. He jumped up and went around and they were all sitting there holding sandwiches.”

Vincent said that the workers brushed it off, until something else happened.

“There is a fellow who likes to sleep under the Crepe Myrtles at lunchtime. He was sleeping under there one day at lunchtime and a cold hand grabbed his leg and woke him up,” Vincent said. “He woke up immediately and there was nobody around. It was a cold hand.”

But any potential scares haven’t stopped construction workers from continuing to renovate the Wrenn House or the land around it.

When Walser recently gave the Post a tour of the future park, he said that they were aware of potential supernatural activity on the site. However, he said that it could be another reason why people would visit the park when it’s completed in early 2021.

Not scared by his visit to the Wrenn House, Hutchins would go back.

“I never felt uncomfortable there,” he said. “Whatever was there was friendly.”

Wreck on Yadkin River bridge shuts down I-85