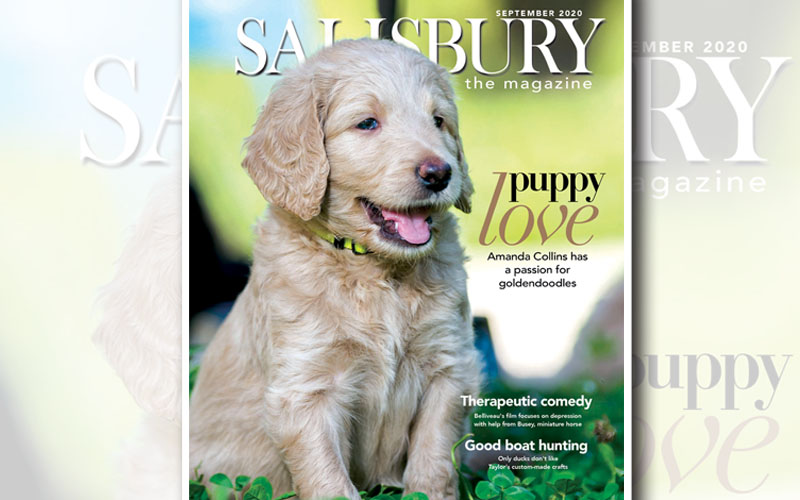 SALISBURY — The September issue of Salisbury the Magazine, a publication of the Salisbury Post, has reached subscribers and is now available elsewhere.

Closures prompted by the response to COVID-19 have affected a few of the normal distribution sites. If you can’t find a copy at your regular spot, magazines are available at the Salisbury Post office, 131 W. Innes St.

The September cover features a goldendoodle puppy, and inside find the heart-warming story of how Amanda Collins of Rockwell became a breeder of goldendoodles, a popular hybrid of golden retrievers and poodles.

The work features Belliveau along with veteran actor Gary Busey and a therapy miniature horse named Kiwi in real life. Yet to be released because of the pandemic, the movie includes many recognizable Salisburians, plus scenes from around town.

Writer Carl Blankenship offers a story on three Rowan Countians — Drs. Allison Baucom, Abby Lane and Joseph Wiggins — who graduated in May from N.C. State University’s College of Veterinary Medicine. To have three new doctors from Rowan in the same class is a bit unusual, and all three took different paths to end up at State at the same time.

Teacher and woodworker Brad Taylor, another N.C. State University graduate but from much longer ago, gives readers a look at one of his new custom boats for duck hunting. Since 2003, Taylor has constructed more than 40 of these boats through his side company, Toller Boatworks.

Former Salisbury Post editor Elizabeth Cook writes about Diane and Luke Fisher’s recent restoration of a cottage off Sells Road. The couple have dubbed the house “Sweet Pea,” and the remarkable transformation also has afforded a new art studio for Diane.

Elsewhere, the magazine visits the clients and volunteers who plant and work the Rowan Helping Ministries’ Garden of Eatin’. The garden provides fresh produce for the RHM kitchen and from there the food finds its way to shelter guests.

Photographers Sean Meyers and Wayne Hinshaw provided many of the images for the September issue.

Also in the issue, Shavonne Potts touches base with community activist Anthony Smith for a quick Q&A. Alissa Redmond provides a reading recommendation in Bookish. The Through the Lens photo comes from Darlene Ball, and Susan Shuping Linn contributed the artwork for Salisbury’s the Place.

Salisbury the Magazine publishes nine times a year. The October issue, now in the works, will be reaching subscribers in mid September and distributed elsewhere later that month.