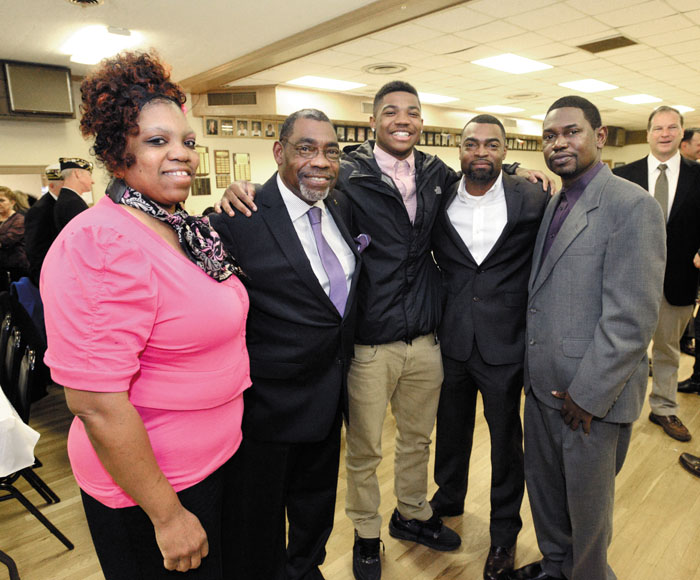 Willie Gillispie, second from the left, with family members. photo by Wayne Hinshaw, for the Salisbury Post

That was the same day opening ceremonies were held for the Summer Olympics in London. That was the healing Olympics, the first time the world’s finest athletes had congregated since American sprinter and jumper Jesse Owens interrupted the 1936 Nazi propaganda machine in Berlin.

Maybe the Olympic birth date provided inspiration for Gillispie. He’s spent his life bringing people together through the bonding magic of sports.

At a very tender age, Gillispie would play his own role in ending racial segregation on playing fields in North Carolina.

“What would I tell people about my life?” Gillispie wondered. “That I have always tried to give back as much as I can. I’d tell them I’m very proud that a lot of young people that I coached in basketball, football and baseball are grown men now, and they grew up to be good men.”

Gillispie was still only 15  years old when the American Legion baseball season began in May 1964. He and his older, bigger teammate Elmore “Moe” Hill had played for Highland High, a Black school in Gastonia that made the state playoffs. He and Hill had been recruited to play for Gastonia Post 23 based on their quarterfinal game against Atkins High of Winston-Salem. Gillispie had gone 5-for-5 against Atkins, while Hill had crushed two homers.

“I’d been taught baseball from an early age by uncles and I was playing with men on semi-pro teams when I was just 14,” Gillispie said. “It was a very aggressive style of play that I learned, stealing and always taking the extra base. If you were on first base and someone got a base hit to right, you had better be on third. You needed to keep pressure on the other team.  You needed to make them throw you out. It was better to be out at third than stopping at second and not trying to get there.”

Gillispie had signed up for Legion because he liked to play baseball and wanted to see if he could handle Legion pitching, but the fleet youngster unwittingly became a part of a cause, as the Civil Rights movement swept through the South. Gillispie and Hill, who was nearly 17 when the season started, were the first Black American Legion players, not just for Gastonia Post 23, but in the state of North Carolina.

It was an adjustment to staying calm and playing in front of large Legion crowds, and the racial element was a major factor, but Gillispie helped Post 23 win the Area IV title all three of his seasons with the program.

“It was rough for Moe and me in a lot of places that we played because people just weren’t used to it, weren’t used to seeing Black players on the field,” Gillispie said. “Lincoln-Cherryville was pretty bad. Shelby could be pretty bad. Hickory was really bad.  There was a town called Henrietta (Rutherford County) that was really bad. Kings Mountain might have been worst of all, because they didn’t even want us in the ballpark there.”

They threw a black cat on the field when Gastonia played at Newton-Conover, but Gillispie and Hill had the support of teammates and coaches and never stopped swinging and never stopped chasing down balls in the outfield.

Gillispie’s batting average wasn’t what he wanted it to be in the summer of 1964, but you have to take into account that he was frequently being heckled, taunted and insulted when he stepped into a batter’s box on the road. He and Hill were sometimes the targets of pebble-throwing white youths when they were stationed in the outfield. There were white fans who were curious about Gastonia’s two Black players, and there were white fans who were downright angry about them being on the field.

“The conditions we were under and the pressure for Moe and myself to produce was just unbelievable,” Gillispie said. “I really didn’t comprehend exactly what it was all about until many years later.”

Gastonia Post 23 was 22-15 in 1964, eliminated in the playoffs by the powerhouse Charlotte Post 9 club that was national runner-up. Post 9 had pitchers Dave Lemonds and Garry Hill, both of whom made it to the majors.

“They were tough pitchers and they were throwing aspirin tablets,” Gillispie said.  “Lemonds was a lefty and I was a lefty hitter, so he was really tough for me, but I got some hits against him.”

Hill signed with the Baltimore Orioles for $1,000, so Gillispie played after that without his big buddy.

In the summer of 1965, Gillispie returned older and wiser to Legion ball. He was a .300 hitter who created havoc on the base paths. He remembers 18 straight steals at one point, without being caught.

Gastonia had a strong team (21-5-1). Two of the five losses were to the Post 9 team that won the national championship.

“We beat Shelby’s Billy Champion that year, 2-0, right before he signed with the Philadelphia Phillies,” Gillispie said. “We had back-to-back doubles against him, and I had one of them. People asked me how I hit him, and I told them that the secret was to start swinging as soon as Billy started winding up.”

Gillispie’s most spectacular Legion season, by far, was his final one in 1966. He batted .419 that summer in an era when hitters swung wood and pitchers dominated.

“It wasn’t easy to hit .400,” Gillispie said. “We played some night games in places that had poor lighting.”

Black students first integrated Gaston County schools in the 1963-64 school year. The 1965-66 school year was designated as a transition year, with full integration set to take place in  1966-67. Students such as Gillispie, who had played for all-black Highland High as a sophomore and junior had a choice of schools.

Gillispie was one of six Black athletes who integrated Gaston County athletics during the 1965-66 school year. Gillispie was close enough to walk to Dallas High, and Highland was an eight-mile bus ride, so he opted to go to Dallas as a senior. A running back, he was the leading rusher and scorer for his new school.

After high school and Legion, Gillispie played football and baseball at Shaw.

He hurt his throwing arm playing football, and that led to a baseball position transition from outfield to first base.

Then he spent 10 years in the military, including four years of active duty in the Air Force.

From 1969-1972, he was stationed at Chanute Air Base and played baseball in the Eastern Illinois League. He made the league all-star team all four years. He is remembered in Illinois because his four-year batting average was .444. Gillispie batted .509 in 1969 and also topped .500 in 1971. Twice, he led the league in homers. Three times, he won the batting title. He won one of those batting crowns by going 5-for-5 the last day of the season.

A book that came out in 2010 about the history of the Eastern Illinois League rated Gillispie as the sixth-best player in league history.

After the service, Gillispie played and coached in the Carolinas. His sons, Lovell and Travis, played at Gastonia high schools. Travis went on to play baseball at Wingate where he was a teammate of Salisbury High stars Tim Still and Kirk Huffman.
Gillispie was a medical specialist in the Air Force and relocated to Salisbury to work for the Veterans Administration hospital.

As much as Gillispie enjoyed playing baseball, he probably loved coaching more.

“We targeted inner-city kids, mentored them, taught them fundamentals,” Gillispie said. “It was all about teaching kids how to play the game the right way. The more you understand the game, they better you’ll be at it.”

In 2015, Bill Gillispie was part of delegation from Gastonia that traveled on a goodwill road trip to Springfield, Mass. Given his unique place in history, he was a perfect ambassador for that endeavor.

The 1934 Springfield team had qualified to play in the American Legion Regional that was being hosted by Gastonia, but Springfield’s lone Black player, Bunny Taliaferro, was banned from playing. The white players on the Springfield team gave up their shot at making it to the Legion World Series and declined to play without Bunny. They got on the bus and headed home. It was an admirable show of team unity for the time — or any time.

Gillispie was part of the crew that made the long bus ride to Springfield to help heal old wounds through playing a series of Gastonia-Springfield baseball games.

In the summer of 2015, Gillispie and Hill finally had their night in the spotlight as far as Legion baseball. In ceremonies in Salisbury, they were inducted into the North Carolina American Legion Hall of Fame, 51 years after they had first taken the field for Gastonia Post 23. That breaking of the color barrier in the state will be their lasting legacy.

What was most impressive about that night was many of their old adversaries from Charlotte Post 9 came to Salisbury to see their belated induction. That was the ultimate show of respect.

Gillispie said he felt 15 again, felt like he was playing in front of 2,000 people again. Stuck on the bases for a very long time, he’d finally made it home.

Hill had a truly remarkable minor league playing career (1965-80), belting 263 homers and driving in 996 runs. He won a Triple Crown in 1974. He swatted 41 homers in 1977. He was named the best player in the history of the Midwest League by Baseball America. Somehow, he never got a single at-bat in the big leagues, so discrimination didn’t just suddenly disappear in the 1960s.

Gillispie’s grandson, Moe Neal, was his pride and joy in recent years, a team captain and star running back for Syracuse.

Gillispie made a road trip to see his grandson play against Notre Dame at Yankee Stadium in 2018.

He got to tour the famed monuments at the Stadium. He stood next to the plaque of Jackie Robinson, and had his picture taken.

That seemed right and fitting on so many levels.