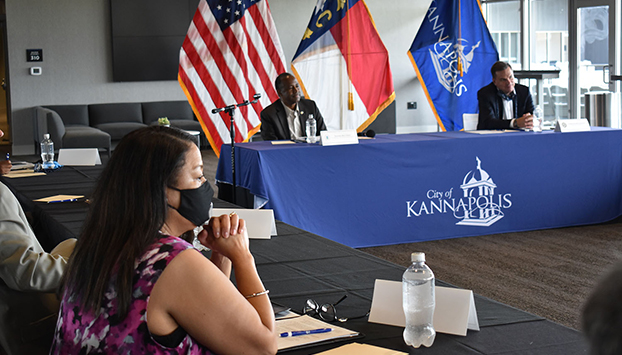 The discussion included leaders from the cities of Kannapolis and Concord as well as Habitat for Humanity Cabarrus County, Opportunity House and Denise Cleveland-Leggett, a regional housing administrator. The discussion was held at the Atrium Health Ballpark. The discussion centered on the benefit of implementing opportunity zones and current COVID-19 relief efforts for housing.

“Affordable housing is such an incredibly important part of America,” Carson said. “In recent years, housing prices have been escalating faster than salaries.”

The 2017 Tax Cuts and Jobs Act created “opportunity zones” in an effort to spur investment in low-to-moderate-income communities. Opportunity zones allow tax incentives to attract investment and development from the private sector, allowing for a public-private partnership approach. They also help reduce the tax bill of those who invest in opportunity zones. There are 8,764 opportunity zones in the U.S., 252 across North Carolina, three in Cabarrus County and five in Rowan County, including several in Salisbury.

The downtown area of Kannapolis along with the Atrium Health Ballpark are within one of Cabarrus County’s three opportunity zones. HUD estimates a total of about 1.1 million North Carolinians reside in an opportunity zone.

Within the past week, the White House Council on Eliminating Regulatory Barriers to Affordable Housing, which Carson chairs, released a report estimating that qualified opportunity funds have attracted more than $75 billion in new capital investments since the opportunity zones program was established. During the discussion, Carson claimed opportunity zones in the U.S. have helped reduce poverty by more than 10%.

“We’re standing here in this stadium, where an opportunity zone was involved in helping to create this whole atmosphere,” Carson said. “And look at the quality of life it’s bringing to this entire area.”

Hudson also referenced the 2019 Affordable Housing Credit Improvement Act, which he co-sponsored. The act seeks to modernize the low-income housing tax credit by making it more flexible and easier to use.

Kannapolis Mayor Darrell Hinnant told Carson about projects prioritized for the city and the need for $5-$7 million more in funding. Those funds would help meet housing needs for the homeless, as well as assist with transitional housing needs and filling vacant apartments.

One project Hinnant referenced includes “dramatic revitalization” in the Midway area on South Main Street, which is within an opportunity zone. Hinnant said the goal is a public-private partnership, which would call for the city to obtain ownership of various parcels in the area and invest in infrastructure, and allow private businesses to develop in the area.

Hinnant added he was thankful Hudson was able to bring Carson to the area and that both seemed “really, really interested in what we had to say.”

Kannapolis City Manager Mike Legg told Carson Cabarrus County has “lots of prosperity,” but that nearly 15% of Kannapolis residents are living in poverty.

“The funding has been consistent, and it will continue to be,” he said.

More than $12 billion in HUD relief was included in the federal CARES Act, with $195 million of those funds allocated to North Carolina.

Negotiations among U.S. lawmakers regarding another round of funding amidst the pandemic remain stalled. On Aug. 8, President Donald Trump enacted several executive actions, with one addressing a moratorium on evictions. On Thursday, the Federal Housing Administration announced the third extension of its foreclosure and eviction moratorium until Dec. 31 for homeowners with FHA-insured single family mortgages.

Hudson said U.S. House Speaker Nancy Pelosi isn’t interested in discussing another round of COVID-19 funding and eviction protection measures. He said she’s proposed $3 trillion in new spending despite only 25% of the funds appropriated being spent.

Carson added that the reason many are having economic difficulties is because of the shutdown.

“We need to be using all of our resources and all of our knowledge to make sure we can open up,” Carson said. “America is not made to be shut down.”

Other projects highlighted in the discussion include Habitat for Humanity’s “Tiny Houses” project in the Carver neighborhood of Kannapolis, along with the newly opened Prosperity Ridge Apartments designated for seniors.

Carson was among the speakers lined up for the final night of the Republican National Convention in Charlotte. Hudson has served North Carolina’s 8th Congressional District since 2013, and is seeking re-election in November. He faces competition from Pat Timmons-Goodson.