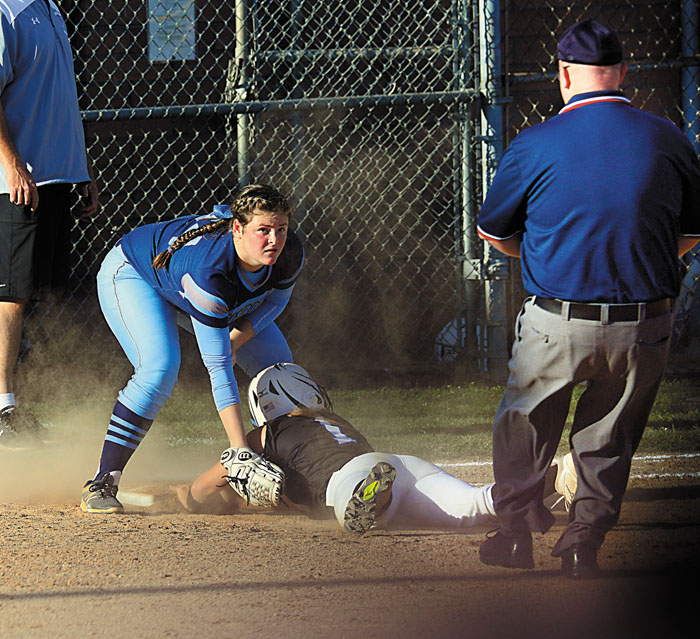 West's Taylor Walton 24 looks to the umpire for the call as she tagged Parkwood's Natalie Ruth 1 out diving back to first. . photo by Wayne HInshaw, for the Salisbury Post

She’s from a baseball-crazy family. Her father placed her in the Spencer Little League program, where she would be playing with and against boys.

“My dad said I had to play baseball, that I had to at least give it a try, but I could quit if I didn’t like it,” Walton said. “I didn’t quit. I loved it more than anything I’d ever done.”

The transition to playing fast-pitch softball with a talented group of girls who were growing up in Rowan and Iredell counties would come easily for Walton.

She played on the Rowan Little League team that won the 2015 World Series. When Rowan made it back to the World Series in 2016 for more nationally televised action from Portland, Oregon, she was Rowan’s ace pitcher. The lefty could spin it and pitched an eight-inning shutout against Michigan and a no-hitter against Netherlands.

The summer of 2016 was a zany one for the Walton family, with Brandon, Taylor’s older brother, doing some slugging and relief pitching for the Rowan County American Legion team that finished as runner-up in the World Series in Shelby. On the opposite coast, Taylor’s softball team also finished as World Series runner-up.

“Definitely a crazy summer, but I really enjoy softball and I really enjoy traveling, so that  was the best experience of my life,” Walton said. “I always wanted to be that girl pitching and hitting in the World Series. I dreamed of doing those things and I got to do those things. It’s just starting to sink in now how cool those days were.”

Four years after her World Series heroics, Walton’s pitching has become secondary to her powerful hitting, but softball is still at the center of her life.

She is verbally committed to Quinnipiac University, a Division I school in Connecticut. The Bobcats compete in the Metro Atlantic Conference with schools such as Marist, Canisius, Manhattan, Niagara, Fairfield, Siena and Iona. It’s about a 12-hour drive from Salisbury, when you factor in the traffic delays getting past New York City.

“Everyone asks me why am I going so far away,” Walton said. “I don’t look at it like I’m going far away. It’s a lot of miles, but I’ll still have a family. After one visit there, I already felt I like I was a part of Quinnipiac’s program.”

Walton has contributed as a pitcher for West, but it’s her left-handed bat as a first baseman that has proven to be special.

“People don’t realize how hard it is for me to coach one of the smartest people in the country,” West coach Jimmy Greene said. “You have to explain to Taylor not just what we’re doing, but why we’re doing it and how we’re going to be doing it. She’s a perfectionist and she’s extremely driven. She’ll go 3-for-4 and be apologizing to everyone for the out. She can be too hard on herself, so one of my jobs is to say something dumb, to loosen her up, to slow her brain down and get her to relax.”

Greene said he never had to text Walton about workouts. She’s texting him, reminding him to text everyone else.

As a West Rowan freshman in 2018, Walton was driven enough to hit .438 with a team-high 33 RBIs. She socked seven home runs.

As a sophomore in 2019, she batted .509 with five homers and 31 RBIs and was the Post’s Rowan County Player of the Year. West’s two big North Piedmont Conference rivals are Carson and East Rowan. She went 9-for-16 against those two teams her sophomore season.

Besides hitting for average and for power, Walton is patient and has demonstrated plate discipline. As a freshman and sophomore, she walked 23 times while striking out 12 times.

“She’s a pure hitter,” Greene said. “A great pitcher also, but hitting is her specialty. I think she lives in a batting cage. She would hit off a tree stump if she could balance a ball on there. Her sophomore year, she carried us in a lot of tough games against a very tough schedule. We could always rely on her bat.”

Walton’s junior year went up in smoke. West had played three games when the season was shut down by COVID-19.

Now her senior season will be condensed to 14 regular-season games from mid-March to the end of April.

“I was very upset that she missed last year and now we’re looking at a shortened senior year for her class,” Greene said. “It’s a shame because there was no doubt she was going to set school records and lots of them. She’s shown that she’s one of the best, but I really wanted her to have the career numbers to prove it. This class of girls is very special to me. I can get emotional talking about this class.”

Besides her work at West, Walton has played for years on high-powered travel ball teams that ventured far and wide.

She had barely heard of Quinnipiac when a Quinnipiac coach spotted her in a national tournament in Colorado in the summer of 2019.

“I remember I made a diving play at first base,” Walton said. “They couldn’t actually talk to me, but one of the coaches waved at me.”

On Sept. 1, 2019, college coaches were able to call juniors like Walton for the first time, and Quinnipiac called her minutes after that communication window opened. An official visit was set up for November, which meant the University could pay the expenses for Walton and her family to visit the campus.

“They were the first school to really recruit me,” Walton said. “I didn’t think I would like it up there as much as I did, but they rolled out the red carpet for me. I got to stay in a dorm with the team. We went to a hockey game. It was a great experience, and I was ready to commit.”

Walton planned on another busy summer of national tournaments in 2020. Her travel team did get to play 55 games, but that was down from the usual 70.

“It was an unorthodox summer, slower than usual,” Walton said. “We had trips to Colorado and California canceled, but our coaches did a good job of finding some other tournaments for us to play in. We got on the field a lot.”

Walton’s pitching for West Rowan has been limited by a a freshman injury and by the presence on the roster of powerful pitcher Whitley Arnott, who signed with Catawba. Arnott did the bulk of the pitching in 2019 for West and would have done so again in 2020.

Walton probably will pitch some for the Falcons this spring, but mostly she’ll swing. Quinnipiac recruited her as a hitter. The Bobcats weren’t aware that she could pitch when she committed. That’s just a bonus.

“The short spring season isn’t what any of us were hoping for,” Walton said. “But I’ll still set high goals — goals for the team and goals for me.”

The daughter of educators Alan and Kim, Walton’s career academic goals are impressive. She hopes to be a cardiologist. The inspiration for that came when her brother was diagnosed with a heart murmur.

“It’s turned out not to be as serious as we feared, but when I first found out about Brandon, I was just terrified,” Walton said. “I know it sounds like a cliché, but I want to help people and families dealing with heart issues. I don’t want anyone to feel as terrified as I did.”

The new school year has been strange. Walton attends physical classes on Thursday and Friday. She takes advanced Rowan-Cabarrus Community College classes online, already working to get ahead with college credits.

“This school year will be a challenge for all of us,” Walton said. “Those days you don’t see your friends feel weird. More than anything, I miss the laughter.”