SALISBURY — A Granite Quarry woman was charged with driving while impaired Wednesday after she allgedly caused a five-vehicle collision.

Salisbury Police charged Misty Dawn Derringer, of Barringer Street, with misdemeanor driving while impaired and driving while license revoked. She was also served with outstanding warrants for identity theft, financial card theft and financial card fraud out of Granite Quarry. 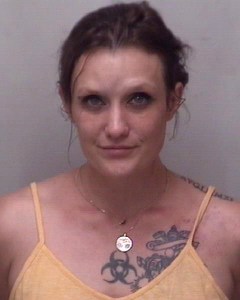 The 31-year-old was traveling in a silver Volvo at the intersection of Old Concord Road and Jake Alexander Boulevard. According to police spokesman Lt. Lee Walker, Derringer made a left turn onto Jake Alexander Boulevard at 45 mph and crossed the yellow line. She collided with a 2002 Ford driven by Freeman Peyton Jr., who was in the outside lane traveling in the opposite direction, Walker said.

Both Derringer and LaFrage complained of pain and both were taken to Novant Health Rowan Medical Center, Walker said.