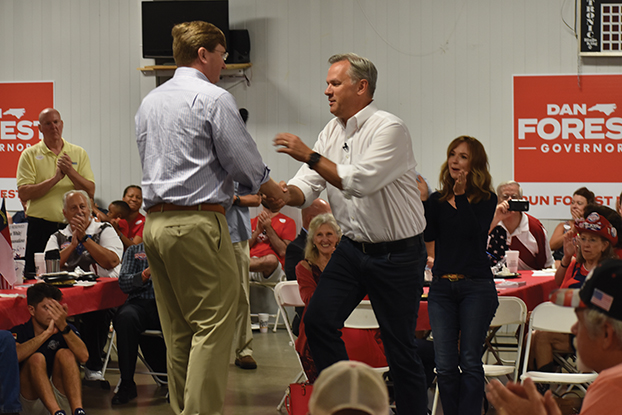 JACKSON, Miss.— Mississippi Gov. Tate Reeves compared his attending a crowded campaign event over the weekend for a North Carolina Republican gubernatorial candidate — while not wearing a mask — to people who attended police brutality protests outside the Governor’s Mansion in Mississippi in June.

Both North Carolina and Mississippi have mandates for people to wear face coverings in public places to slow the spread of the coronavirus. No more than 10 people indoors and 25 outdoors are allowed to gather in North Carolina, under executive orders from Democratic Gov. Roy Cooper. In Mississippi, Reeves signed executive orders banning people from attending gatherings with more than 10 people indoors or 20 people outdoors.

On Sunday, Reeves was one of more than 200 people who attended a tightly packed rally for Lt. Gov. Dan Forest at the Rowan County Fairgrounds in Salisbury where few people wore masks, the Salisbury Post reported. Forest is running for governor against incumbent Cooper.

Reeves said Tuesday that he wore a mask 90% of the time while in North Carolina and that he only took his mask off to speak at the rally in support of Forest. Both Mississippi’s and North Carolina’s mask mandates allow people to remove masks temporarily while making a speech or broadcast.

However, photos from the event show Reeves sitting at tables surrounded by other people, posing for photos next to attendees and shaking hands with Forest and others — all while not wearing a mask.

When asked why he did not wear a mask at the event, Reeves brought up protests around police brutality and racial injustice that happened in Jackson in June.

Forest has cited the First Amendment for why he is able to host political events that go against Cooper’s executive orders. He has hosted numerous in-person campaign events where attendees did not wear masks. At a campaign event on July 4, Forest claimed that multiple studies have shown masks are not effective at preventing the spread of viruses.

Forest’s campaign placed a thermal imaging camera at the front door of his event Sunday that it said detected temperatures of 100.4 degrees or above, The Salisbury Post reported. Cooper has refused to hold in-person campaign rallies and has only held virtual events.

Reeves has said repeatedly during the coronavirus pandemic that he believes wearing masks is one of the single most important things Mississippi residents can do to mitigate the spread of the virus.

“Wearing a mask — as irritating as it can be, and I promise you I hate it more than anyone watching today — is critical,” Reeves said on Aug. 4, when he issued his statewide mask mandate.
—————
Leah Willingham is a corps member for the Associated Press/Report for America Statehouse News Initiative. Report for America is a nonprofit national service program that places journalists in local newsrooms to report on undercovered issues.