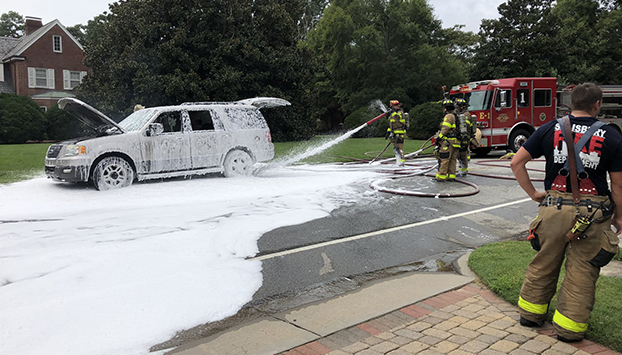 SALISBURY — Two people escaped unscathed from a burning vehicle after a warning from a passing motorist.

The sport utility vehicle was traveling on Confederate Avenue Monday around noon when “a motorist came up beside them to let them know their car was on fire,” said Salisbury Fire Division Chief Jay Baker.

The occupants got out of the vehicle without injury at 215 Confederate Ave. The initial call came in at 12:14 p.m. and firefighters arrived to find the vehicle on fire. The fire was under control at 12:56 p.m., Baker said.

Salisbury firefighters used a type of foam to suppress the vapors, Baker said. Foam was used instead of water because of the ruptured fuel line.

“You need three things for something to burn — heat, fuel and oxygen,” he said.

The leaked fuel flowed toward Lake Drive, Clubhouse Drive and the Hurley Park area. As a result, the Salisbury-Rowan Haz Mat Team used containment booms and hydrocarbon pads to soak up most of the fuel.

Baker said the fuel was diluted by the time it reached the park area. A company was called in to clean the fuel spill.

The vehicle is likely totaled.