The season that could’ve been: high school, college football on hold 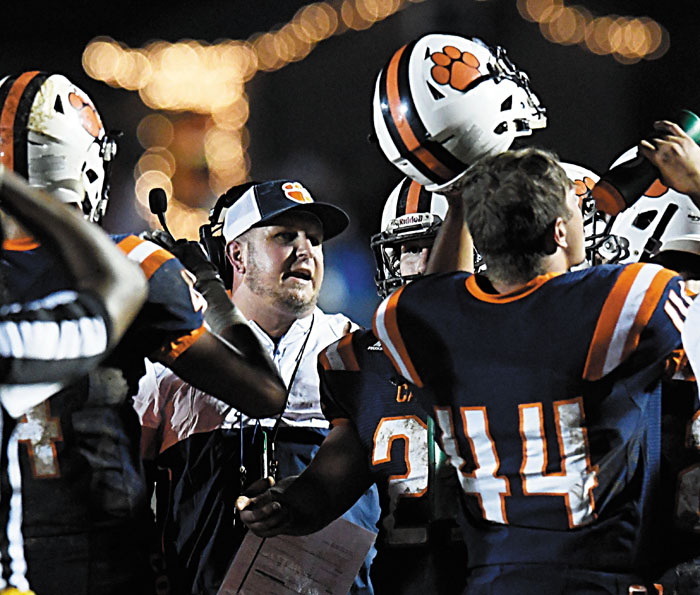 Carson Coach Daniel Crosby’s post on social media summed up the feeling of numerous players and coaches: ‘Really wish we were going to battle with you guys tonight. I hurt for all our guys not taking the field tonight. We will remain positive, and February can’t come soon enough.’ photo by Wayne Hinshaw, for the Salisbury Post

Mooresville coach Joe Nixon would have brought his new squad to Mount Ulla to play his old squad, the West Rowan Falcons. There likely would have been a capacity crowd as West head coach Louis Kraft made his debut against one of his mentors, directing a team led by mammoth defensive lineman Zeek Biggers, a Georgia Tech commit, and returning quarterback Noah Loeblein.

Salisbury coming off a 13-win, state-runner-up season under coach Brian Hinson would’ve made the five-mile trip to Spencer to battle rival North Rowan. The Hornets have gaping holes to fill on the offensive line and defensive secondary, but they still have  Zae Clay, last season’s Central Carolina Conference Lineman of the Year;  linebacker Jalon Walker, one of the most heavily recruited players in the country; returning quarterback Vance Honeycutt, and star running back Mike McLean, so they’re going to be fierce. North’s debuting head coach Nygel Pearson would’ve tried to stop the Hornets with four-year starting DBs Zay Davis and Jaharion Graham and would have tried to move the ball against Clay and Walker and their friends with returning QB Kyree Sims.

Carson has obvious reasons for optimism. The huge freshmen class of three years ago is now a large senior class. Two of Carson’s best players, Jordan Garland and Connor Floyd, were finished with injuries before the halfway mark last season, but both have returned to health. The Cougars figure to be a lot better in February than they were last fall.

“Really wish we were going to battle with you guys tonight,” Carson coach Daniel Crosby offered Friday on social media. “I hurt for all our guys not taking the field tonight. We will remain positive, and February can’t come soon enough.”

East Rowan, with some great athletes in the backfield, such as Sammy Pinckney, would have opened at home against North Stanly. East has added a very good transfer from A.L. Brown in Aiden Schenck.

Davie, with a Division I pass-catch combination in Nate Hampton (Liberty) and Jack Reynolds (Charlotte) would’ve played its traditional wild opener in Greensboro against Page.

But none of those potentially exciting things happened because this is the year of COVID-19.

It’s uncertain at this time if  non-conference matchups such as Salisbury-North and Carson-South can take place in February, when the season is now scheduled to start.  The first official practice day is set for Feb. 8, with the first games on Feb. 26. Teams are limited to seven regular-season games, with a playoff format that is TBA. Salisbury and South play in a 10-team league, so it’s going to be interesting to see how the NCHSAA decides to proceed.

The plan is for sports this school year to open with volleyball and cross country, with the first practices on Nov. 4 and the first contests on Nov. 16.

Back in early July, the board of directors for the Central Intercollegiate Athletic Association, a league that includes Livingstone, voted to shutter fall athletic competition in football, volleyball and men’s and women’s cross country.

The CIAA was among the first conferences to make a no-fall sports decision.

The conference agreed to honor athletic scholarships and is exploring the possibility of  a “modified schedule” of competition for traditional fall sports during the spring of 2021.  There will be an adjusted process of determining conference champions. A time frame has yet to be determined.

The South Atlantic Conference, which includes Catawba, announced a delay (to Sept. 26) in July and followed quickly with a second, more far-reaching announcement in early August.

Athletic activities, including practices, weight training and voluntary workouts for all sports are suspended until Sept. 1.

Catawba head coach Curtis Walker believes that the football Indians are likely to have something like a five-game season to look forward to this spring.

“We’re all working to have a meaningful season,” Walker said. “We’re encouraged.”

Exactly who Catawba might play in the spring is uncertain.

Travel figures to be a factor. There’s been some unofficial speculation that a comeback by a Catawba-Livingstone game would make sense, although that remains to be seen.

Walker is moving forward daily as positively as possible.

There’s some optimism. The new turf field is beautiful. The The Indians are on campus. Classes started on Aug. 18.

Football players are diligently working out on their own, looking forward to the day when they can be guided by hands-on coaches. The only contact with coaches so far has been in the form of virtual meetings.

“The positive in all of this is that our incoming freshmen are going to have four months to get acclimated to our culture and to college football,” Walker said. “We have a wealth of young talent in the program and they’ll have a great opportunity to learn from the older players and to be ready to contribute this spring. We’ll soon be able to have voluntary workouts where they can start lifting and start learning the playbook.”

Walker’s two sons, Jalon, a junior linebacker, and Deuce, a freshman wideout/DB, attend Salisbury High and, like their teammates, are now working out on their own.

Walker is hopeful that his football team will have a spring season — and that his sons will as well.

“The key is for everyone to think about each other and to follow all the safety protocols,” Walker said. “If we do that, football will come back.”

Local Democrats say the messaging was strong during virtual…