RV lifestyle — the way to roll

Still want to travel this summer but don’t want to drive or fly? Consider going by RV.

RV sales have increased dramatically because of the pandemic, with sales up 11 percent in June, the highest monthly total since October 2018, according to the RV Industry Association. Additionally, Newsweek reports that RV rentals are up 50 percent.

So why not take off and go? 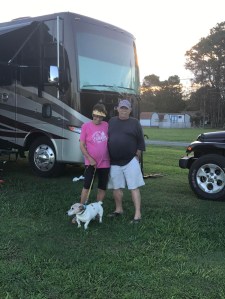 That’s just what Gwen Smith and Rick Matthews did. A year ago in April, they sold their house at High Rock Lake and hit the road as full-time RV’ers.

It all started three years ago when they were visiting family on the eastern shore of Virginia, and bought a small camper to transport Rick’s son, Jason, who’d just had knee surgery.

“We did it that one time and fell in love,” Smith says.

The couple bought a larger RV within a year and began taking longer trips. They now own a 34-foot motorhome, and tow a Jeep behind it. They spent a month at Huntington Beach in South Carolina and met a couple from Ottawa, who later invited them for a visit. In September at Dan Nicholas — a favorite camping spot — they met a couple from California, with whom they frequently now travel.

“It is extremely freeing,” Smith says of the RV lifestyle. “I loved my home. It was a beautiful home on the lake. But it was freeing to sell it to someone who loved it as much as we did. It’s just been great.”

In February, they headed to Alabama to have work done on the RV, where it had been built. They then went to Briarcliffe RV Resort in Myrtle Beach, where they have a membership, and were able to stay until they went to see Jason and family in Boone.

They return to Salisbury for doctors’ appointments, staying at Crosswinds RV Park in Linwood. A mail service in Florida forwards mail to them.

“We have had pretty good cell service everywhere,” Smith notes.

The couple typically follows good weather in whatever direction they want to go. An organization called Harvest Hosts offers free RV camping at more than 1,000 wineries, breweries, distilleries, farms and museum for a nominal annual membership, so they’ve been busy exploring those destinations.

They plan to visit the 48 contiguous states, Smith says, although the pandemic has put a damper on that for now. “We don’t want to get too far from home.”

But, she adds, “Being able to isolate has been the best thing. We cook all our meals.”

Smith is a retired nurse and her husband worked on the railroad for 41 years. Also along for the ride is Stumpy, their 12-year-old Jack Russell terrier.

“We get along better than we did at home,” she says. “I guess we have to.”

According to the RV Industry Association, the average RV owner is 48 years old. Blair Phillips, 42, and his wife, Suzanne, 41, are not there yet, but Phillips says he still finds “like-minded” people when they camp. He and his wife own Blair Phillips Photography in Landis. 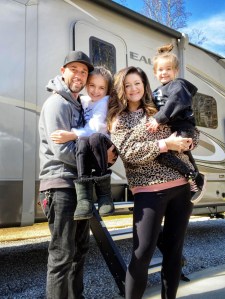 Blair and Suzanne Phillips have been camping with their daughters, Ava and Ella, for the past five years.

The couple started camping when their younger daughter, Ella, was two weeks old. She’s now 5, and her older sister, Ava, is 9.

“We’ve run the gamut of every type of camper,” Phillips says, “but we’ve settled into what gives us a practical, homey feel.”

“Having my own space is a big thing,” Phillips says, “and I was thinking of a way to build memories with my family on vacation.”

The family now camps about two months a year total, mostly at Myrtle Beach. Even with the pandemic, the family can still go on vacation and still social distance. Phillips says they’re planning to head back to the beach for Labor Day.

RV-ing is nothing new to Jim Cocke and his wife, Debbie Wood. They’ve been doing it for the past 13 years. The couple has a 25-foot Airstream, and Cocke has been past president of the Airstream International Club, as well as the local group.

“With the pent-up demand, they can’t get them out fast enough again,” he says. He notes that Airstream produces about 90 trailers a week at its plant in Ohio, and it only produces sold units.

“Airstream thinks there isn’t any other trailer who approaches its quality,” he adds.

In 2007, Cocke and his wife were working for Carolinas Healthcare System when they decided to quit their jobs, sell their house, and strike out in their trailer.

“It has been absolutely fabulous,” Cocke says. “It was a leap of faith, but we figured we could be frugal.”

One of their favorite spots has been visiting their daughter, who lived in Vancouver for 11 years. From there, they became big fans of traveling to Canada and took trips to Alaska twice. They’ve traveled to the Pacific Northwest, the four corners of the Southwest (Arizona, Utah, Colorado, New Mexico) southern Georgia, Cajun country in Louisiana, Death Valley, Mesa, Arizona and southern Florida for the winter, Corpus Christi for a cool and rainy January (“The weather is never like this,” they were told), and the eastern and western Rockies.

They’ve seen 45 of the 49 states, lacking some states in New England. They also want to see the Maritime providences in eastern Canada.

They’ve almost completed construction on a 1,250-square-foot home in Ashe County in the Blue Ridge mountains. For now, they’re parked 100 feet away on the property.

“Although we’re building a house, we’re not through traveling yet,” Cocke says.

Dryer catches fire at county detention center; no one hurt

SALISBURY — No injuries were reported Friday morning after a fire was discovered in the Rowan County Detention Center’s laundry... read more