EAST SPENCER — When the Rev. Michael Mitchell approached a few local pastors to help him spearhead a youth advocacy program, each one gave him a resounding “yes.”

Mitchell, a pastor at Liberty AME Zion Church, spoke at a recent East Spencer board meeting to ask for support for the program. He received the support he was looking for and the program, once started, will be based in East Spencer.

Mitchell has long been involved in the community, especially East Spencer, where his family’s roots are steeped. He hopes the board will agree at its September meeting to allow meeting space at the town-owned, 1909 East building. The building is located across the street from town hall and is the former Rowan-Salisbury School Administration building and a former school.

Mitchell has enlisted the help of fellow pastor and community advocate Timothy Bates, who leads the Statesville churches Cameron Presbyterian and Calvary Presbyterian. He also recruited the Rev. Andrew Davis Jr., who is an associate minister at Fairview Heights Baptist Church in Salisbury. His brother, Coach Andrew Mitchell, will also assist with the recreational component of the program.

In addition, April Woodberry, the maternal grandmother of A’yanna Allen, will assist as will Jackie Sullivan, Stephanie Miller-Mitchell and his sister Stephanie Mitchell Cato.

The pastors hope to implement a video game competition as well as engage participants in non-sports-related activities, including chess and after-school tutoring help. The children will be given a meal while there.

He said the program offerings won’t be just for East Spencer residents. They’ll be open to anyone within Rowan County and outside of the county. 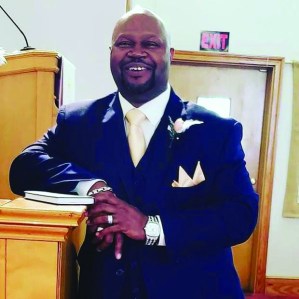 “The kids, after school, don’t really have a place to go, and we just want to give them a safe haven, a place to go, something that would occupy their time and their mind and keep them out of trouble,” Davis said.

Davis has been involved in the 100 Men in Black concert through the North Rowan Connection Choir and Dinner. He’s been an organizer of the 1,000 Men Marching as well as the most recent march held in East Spencer following the death of George Floyd.

“I just kind of hang around, see what’s going on, get involved,” Davis said with a laugh.

He’s also been a supporter of Pastor Bates’ Man Up Monday mentoring program.

“I just try to see what’s going and see where it is I can help,” he said.

With the youth advocacy program, Mitchell said he wants to create a safe space for youth, not only because of the violence in the communities, but after many of the activities the youth had been used to doing were canceled during the COVID-19 pandemic.

“Years ago, when the Dunbar Center was open — our youth, our young men — you didn’t see them on the streets. They stayed in the gym until 10 o’clock at night,” Mitchell said.

He said there are many who would like to join the YMCA, but have no transportation to get them there.

The hope is that the community will assist with funding, Mitchell said.

Mayor Barbara Mallett said the board will hear from the pastors in September to get a total scope of what they want to do.

“It would give the children an outlet. We don’t have the Dunbar Center anymore. Royal Giants park has been closed all summer. We just still need a gathering place. This will be an outlet,” Mallett said.

“We need to connect; see each other and know each other. I hope other people join in,” Mallett said.

For more information about how to support the youth program financially or to volunteer contact Andrew Davis at 704-202-0236 or Michael Mitchell at 704-245-0729.