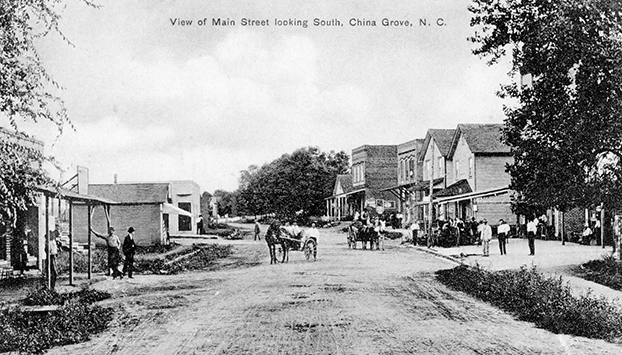 This view of China Grove’s Main Street looking South was printed by P.L. Ketchie and Co. of China Grove and postmarked 1908, There were dirt streets and dirt sidewalks as well and no paving of any description anywhere.

From mail-in voting to Postal Service cuts, the public’s attention is closely trained on the mail and how quickly it gets to our homes.

As of Friday, the Rowan County Board of Elections had received more than 4,000 requests for absentee by mail ballots — more than all of the 2016 election and several times the total at this point that year. Absentee by mail voting traditionally is not controversial, but it has become so in 2020 — a year when everything seems to divide us. There also are reports of postal sorting machines being removed across the country. The national political debate, meanwhile, is trained on funding for U.S. Postal Service operations.

It’s worth remembering the story of the modern-day Postal Service has roots in Rowan County. Salisbury is home of a man called a forefather of rural free mail delivery. China Grove, meanwhile, became the first rural free delivery route in the state and one of the first in the nation.

A century ago in rural Rowan County, mail wasn’t simply placed in boxes on rural roadsides. Free delivery first came to cities in 1863, but rural communities were left out. Farmers usually traveled to a post office to pick up their mail when coming into town to get their news and provisions.

Archibald Henderson wrote in the 1935 edition of the Post that rural free delivery was almost unheard of throughout the country, aside from a few enthusiasts. His father was John Steele Henderson, a Salisbury native who served in Congress and as chairman of the House Committee on the Post Office and Post Roads.

“My father constantly spoke with enthusiasm, I well recollect as a lad, of the incalculable potentialities for the enrichment of rural life and the enlightenment of the great agrarian masses which rural free delivery would afford,” the younger Henderson wrote in the article, which was published in the Post as well as the Charlotte Observer in January 1935.

Congressman Henderson used his chairman position to secure a $10,000 allocation for rural free delivery and shepherded the allocation to final passage, his son wrote. A man named Thomas E. Watson, of Georgia, offered the amendment to the much larger, multi-million-dollar Postal Service appropriation bill in 1893. Despite administrative opposition, Salisbury’s congressman kept it in.

Because of the influence of Congressman Henderson and that China Grove was home to Kerr Craige, then the third assistant postmaster general, the southern Rowan town became one of the first in the country to see rural free delivery.

An initial attempt to establish a route failed, wrote J.C. Deaton in a 1935 letter to the editor printed in the Post and in response to Archibald Henderson’s piece.

J.B. Goodnight, the first carrier here, became discouraged after only two people would sign up. Frank Graham, then the China Grove postmaster, was dismissed as a result of the failure. Deaton, the man who wrote the letter to the editor, was named the new China Grove postmaster. And he received exact instructions about what to do in his first days.

“Mr. Gillespie (a post office inspector) told me he would be out at China Grove Tuesday morning and wanted me to have two young men there ready to take the work as carriers and be instructed as to their work,” Deaton wrote.

Ready for their orders on that day were Guy Trexler and Arthur Cagle.

But the new crew ran into the same trouble as Goodnight. Deaton wrote in his letter to the editor that still just two men — C.A. Linn, of Landis, and Martin Blackwelder of Kannapolis — accepted rural free delivery.

“As postmaster, I had to go with these young men on their route and beg the people to let me send their mail out and even had to put a box on one patron’s front porch,” Deaton wrote.

A 1941 Charlotte Observer article provided by the Rowan Public Library says a principal objection by farmers involved leaving mail in boxes. They preferred instead to leave their mail at the post office until they could call for it. But it was often a week between trips and sometimes several weeks if there was bad weather. In 1996, the Post’s Tracy Presson wrote that farmers were also reluctant to give up their trips into town because they received local news in addition to the mail.

Modern-day life is so much different than a century ago. For most messages, a hand-written letter isn’t required. Seconds, not weeks, separate the exchange of messages — whether they are sent across the world or across the street. But one thing remains the same: the Postal Service and the mail it delivers — from online orders to birthday cards and ballots — remains a critical part of our lives today. And whether it’s raining, sleeting or snowing, you can count on the post office to deliver the mail in cities and rural areas.

At the conclusion of his 1935 letter to the editor, Deaton was right when he said the rural free delivery in China Grove was “the beginning of the greatest service ever given to the rural people.”