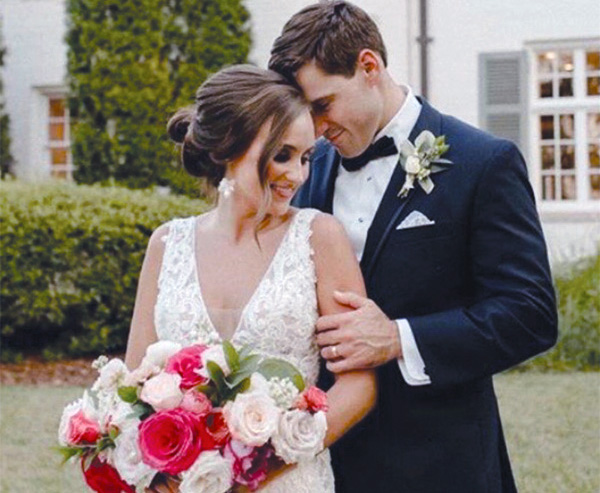 Lauren Johnson, of China Grove, and Chris Clark, of Kannapolis, were united in marriage on August 8, 2020. Their ceremony took place at Boxwood Estates in Mocksville with minister George Evans as officiate. The 6 p.m. ceremony was followed by a reception also held at Boxwood Estates.

The bride’s parents are Mr. Brian and Rhonda Johnson. She is the granddaughter of the late Ray Johnson and Mrs. Nadean Johnson and the late Mr. Bill and Betty Evans, all of China Grove. A 2013 graduate of South Rowan High School, Lauren graduated Valedictorian in 2016 from Cabarrus College of Health Sciences as a Registered Nurse and in 2017 from Appalachian State University with a Bachelor of Science Degree in Nursing. She is currently employed with Atrium Health at Jeff Gordon’s Children’s Hospital.

The groom’s parents are Mr. Mike and Cheri Clark of Charlotte. He is the grandson of Mr. Charles and Bonnie Smith of Waxhaw. A 2011 graduate of Charlotte Christian School, Chris graduated in 2015 from Appalachian State University with a Bachelor of Science in Psychology and in 2020 from the University of North Carolina at Chapel Hill with a

Doctorate in Dentistry. He is currently employed at Aspen Dental in Concord.

Following their ceremony, the couple took a trip to the Bungalows Resort in Key Largo, Fla. They will reside in Kannapolis.