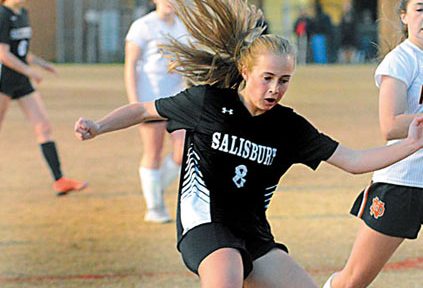 Salisbury's Sutton Webb is the Female Athlete of the Year. photo by Wayne Hinshaw, for the Salisbury Post

SALISBURY — Her high school career was only a few weeks old in the spring of 2019 when Salisbury soccer phenom Sutton Webb scored a program-record six goals to bury Oak Grove.

That was a highlight of a spectacular freshman season that included 43 goals and 15 assists and Central Carolina Conference Offensive Player of the Year honors.

The trajectory of Webb’s career is still ascending. Last week, the junior committed to the University of Georgia Bulldogs.

“We’ve had a very good, successful program with outstanding players such as Emma Miller, who was a monster, and Julia Honeycutt, who signed with Charlotte,” Salisbury coach Matt Parrish said. “But this is the biggest commitment we’ve had since the program began in 1994. It’s really remarkable when you consider how highly regarded she is when she basically has played one high school season. She has the opportunity to walk where no one who has played for us has ever walked. She’s writing her own story. Georgia might just be the start.”

“There are similarities between Sutton and Madison Henry, who was a great player for South Rowan,” Parrish said. “I think UNC Wilmington got a real steal in Madison Henry. Both girls may be of smaller stature, but they have rare speed and they’re finishers. When Sutton gets the ball around the goal, she knows exactly what she wants to do with it. As she gets stronger on the ball, she could be unstoppable.”

Webb tried a number of sports.

She remembers getting started in soccer at age 3.

She played tennis for the Hornets’ strong program as a freshman and was 13-1, while competing at No. 5 or No. 6 singles and No. 2 or No 3 doubles.

As a sophomore, she was impressive in cross country. In the Rowan County Championships at Dan Nicholas Park, she placed third behind East Rowan senior Adalie Harrison and Carson senior Taylor Conrad. She also took third in the CCC Championships at Salisbury Community Park. She plans to run cross country again this season. Meets can start on Nov. 16.

Webb = also was one of the leaders on Salisbury’s jayvee basketball team last season.

But soccer is where she is really gifted.

“By fourth or fifth grade, I knew soccer was my best sport,” Webb said. “I’d always loved it from the start. Some sports are more individual, but soccer is such a team sport. It’s easy to make friends when you’re part of a soccer team, and I like that. It’s also a very fast sport and a very competitive sport.”

There’s no telling how many goals she would have scored as a sophomore, even after the element of surprise was gone and with opponents game-planning to focus their defense on her.

Salisbury had only played three games, including a huge win over rival West Davidson, when COVID-19 halted Webb’s sophomore season last spring. She had three goals and four assists at that point.

“I was upset, but then I thought about how much worse it was for our seniors,” Webb said.

Parrish said he’ll never get over that lost season. He’s convinced the Hornet girls had the best chance they’ve ever had to make a long playoff run.

But maybe they can make one this spring. The girls soccer season is scheduled to run from March 15 to April 30, plus a playoff format that is TBA.

“I  do hope we have that season because it will be a great experience for Sutton to be a leader for the first time in the locker room and off the field as well as on it,” Parrish said. “She’s not naturally outspoken, so it would be valuable experience for her to be in more of a vocal role. As a freshman, she scored a lot of goals, but she deferred to the older players. The other part of  the equation is that high school soccer is a whole lot of fun, not as regimented as a college program.  I want Sutton to experience the fun of playing with Piper Muire and (CCC Defensive Player of the Year) Lillie Rusher and all the excellent players that we have on our team.”

Webb has gotten her regional exposure from high-powered club teams. She was a member of the Lake Norman Soccer Club. That was one of the three clubs in the Carolinas that merged to form the elite Charlotte Independence Soccer Club.

Webb’s role is a little different with Charlotte Independence.

At Salisbury, she’s one of two forwards. Charlotte Independence uses a three-forward alignment, with Webb on the left wing.

Webb is a true two-footed player, which means she’s as good with her left foot as she is with her right.

“Besides my speed, that ability to use both feet well is probably my biggest asset in soccer,” Webb said. “In high school soccer, most players have a dominant foot.”

“In college soccer, in a conference like the SEC, her ability to finish either way probably becomes even more important than her speed because everyone in the SEC is going to have speed,” Parrish added.

Webb’s club team played in a showcase in Florida and gave her a chance to show off both feet.

“Georgia had seen my highlights and my club coaches sent them our schedule, the times we were playing and the fields we were playing on in Florida,” Webb said. “They watched me play for three days and they liked me and they wanted me to come to a camp at Georgia, but then that camp was canceled by the pandemic. But I did have a chance to meet the staff and we stayed in touch. I was excited when they made an offer. I liked everything about Georgia. There’s not anything not to like. And it’s not so far away that my family can’t come to see me play.”

Webb has plenty of time to figure out a college major.  She says her strengths are on the math and science part of the academic spectrum.

Webb’s new school year is made up of virtual Mondays and Tuesdays, “catch up” Wednesdays, and traditional, but masked, classroom learning on Thursdays and Fridays.

Along with her teammates, she hopes and prays for something resembling a normal soccer season in March.

Parrish is equally hopeful because after watching the last season go up in smoke, he can’t wait to unleash the soccer equivalent of a perfect storm.

He’s never heard Webb brag about those 43 goals she scored as a freshman or about how many goals she could’ve scored as a sophomore, but she’s got a lot more high school goals in her, and he knows it.

“Sutton is someone who will always prefer to talk with her actions,” Parrish said. “But she has an amazing combination of speed and skill and power, plus the right mentality for this game. When she’s in position to score, she finishes.”