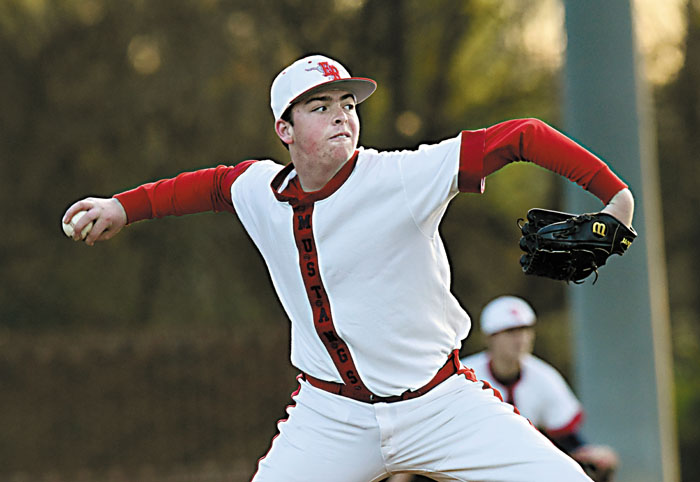 East's pitcher Jake Hunter figures to the be ace for a well stacked deck of Mustang pitchers. File photo by Wayne Hinshaw, for the Salisbury Post

But other than that, things are going OK  for Hunter.

The tall, talented 17-year-old has been firmly committed to East Carolina’s baseball program since the summer of 2019 and the NCHSAA has a plan in place for him to have a senior season that will start in late April and run into June.

Hunter will be expected to provided Strasburg-like mound outings for East Rowan and eventually for East Carolina. He’s almost 6-foot-4 and he’s a 90-mph guy. He’s hit 91 on the radar gun. More importantly, he can work consistently at 89-90 and command three pitches.

“I’m an Atlanta Braves fan as far as having a favorite team, but I really like the way Strasburg acts on the mound,” Hunter said. “I model my pitching style after him. I really like his demeanor as a pitcher.”

In a program that boasts a ridiculous surplus of arms  — Hunter, Cameron Padgett, JD Basinger, young N.C. State commit Chance Mako and Mattox Henderson would be the current top five — Hunter is the ace.

The big-framed right-hander is a hard-thrower and a strike-thrower. That’s a combination that causes major headaches for high school hitters. He also hides the ball well before he fires it.

“He has great movement, he can paint corners, and he can challenge hitters inside with his fastball,” Hatley said. “When a high school guy can put three pitches wherever he wants them, he can dominate. Jake is dominant.”

His three main pitches are his fastball, changeup and curveball. He’s working on a slider, as well, but that’s not a pitch he’ll need in high school. That’s just something else for the hitters he faces in elite travel ball competition to worry about.

As a freshman in 2018, Hunter won three games and saved one for East’s varsity. He struck out 44 in 37 innings while walking 11.

He was nothing short of sensational as a sophomore in 2019.

He was North Piedmont Conference Pitcher of the Year. Ordinarily, the season he had would’ve also put a Rowan County Pitcher of the Year award on his mantel, as well, but that was the year Carson senior Cole Hales was amazing and won a head-to-head tussle with Hunter.

Hunter’s sophomore season included a no-hitter in the 3A state playoffs against Tuscola. In that gem, Hunter threw 71 of 93 pitches for strikes. He walked one and hit one.

Shortly before that special night, Hunter twirled a four-hit shutout against a West Stanly team that came into the game with a 17-3 record.

Hunter pitched for the South Charlotte Panthers showcase team in the summer of 2019 against stout, national-level competition.

“I started being contacted by a lot of schools at that point,” Hunter said. “But East Carolina wasn’t a hard decision for me to make. That’s a program that’s always in the top 25 nationally. That’s a program where the coaching is on another level from most places.”

Baseball recruiting is normally over with that verbal commit. When someone commits, there’s a gentleman’s agreement for everyone else to back off. That isn’t always the case in football and basketball.

“I’ll be signing with the Pirates,” Hunter said. “There are no better options. I felt good about ECU when I committed, and I feel good about ECU now.”

The year, 2020, has brought adversity to Hunter, as it has to every other athlete.

East Rowan’s promising high school season, which had deep playoff run written all over it,  lasted just six games, five of them victories. Hunter’s last trip to the mound as a junior was dominant — five innings, one hit, six strikeouts and one walk  — in a 6-0 victory against North Stanly.

Hunter’s summer with the South Charlotte Panthers also felt the negative effects of the COVID-19 pandemic.

“There was a pretty long layoff from my last East start to pitching with the Panthers, so it took a while to get my arm in shape,” Hunter said. “Usually I get to swing quite a bit, but not this summer. We had some uncommitted guys and they wanted to make sure they got their at-bats for the scouts. We didn’t have any fans the first few weeks we played, so that was very different. Normally, the fans help get us hyped up and I also had gotten used to seeing a lot of scouts at all of our games, but it just wasn’t a normal summer. I felt lucky my family was able to wear masks and come to my games.”

He did get to play at the new ball park in Kannapolis, which was a thrill. He also played in major events in Georgia and Florida.

Now a senior, the start of this school year has been different for Hunter. The two in-class days for him are Monday and Tuesday. Those are the two that are going to be the most fun.

“I work every day to try to get better,” Hunter said. “I’m about 230 pounds now, but I’ve turned some body fat into lean muscle. I hope to add a little more velocity by the time we start playing in the spring.”

There may be the normal high school fall baseball league this September, probably with a Tuesday and Thursday schedule because some players will be involved with weekend showcase teams.

“At least our guys are in school right now, so I’m staying optimistic,” Hatley said. “We should have a good team. We’ll look forward to putting the ball in Jake’s hands in the spring.”