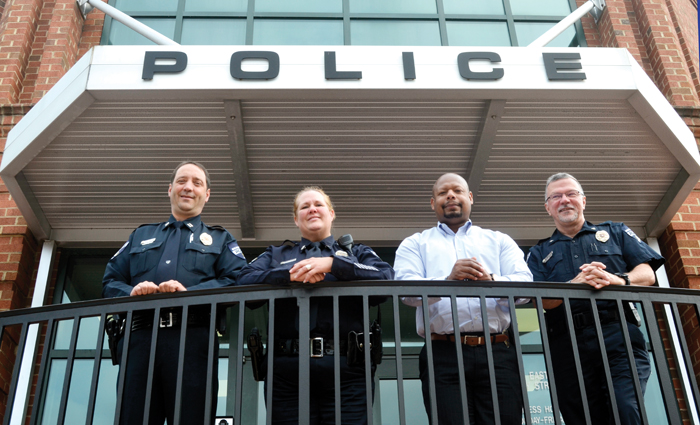 Salisbury Police Department’s Maj. Shon Barnes has been with the department for three years and just accepted a job in Chicago working for an oversight agency over the Chicago Police Department. Barnes, second from the right, is shown with Capt. Brian Stallings, Capt. Melonie Thompson and Police Chief Jerry Stokes. Shavonne Potts/Salisbury Post

SALISBURY — After three years with the Salisbury Police Department, Deputy Chief Shon Barnes is headed to the Midwest for a new job and will call the “Windy City” his new home.

Barnes came to Salisbury in April 2017 after nearly 20 years with the Greensboro Police Department where he served as captain.

He’s now headed to Chicago — where he’ll be the director of training and professional development with the Civilian Office of Police Accountability. Barnes will be working for an oversight agency that is responsible for the intake of all complaints regarding allegations of misconduct by officers of the Chicago Police Department.

While with the Salisbury Police Department, Barnes was instrumental in getting several programs started, including the Community Classroom, a quarterly informational session that was taught by officers to give citizens insight into the different components of police work. The discussions included what to do during a traffic stop, police decision-making, crime scene investigation and spotting human trafficking.

“The last three years have been a great discovery for the department. Our plan was to try to change the culture of the department from one of workers to one of problem-solvers and community collaborators,” Barnes said.

During his tenure, the department was able to hire two crime analysts. The department has not previously analyzed crime from a scientific perspective. Officers reported crime, but lately have been able to look at crime trends for the first time, which he said has been a success.

Another change involved an intentional effort to hire more minority men and women to work as officers the department. 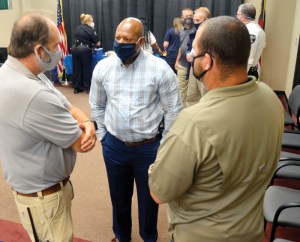 Salisbury Police Department’s Maj. Shon Barnes, center, has been with the department for three years and just accepted a job in Chicago working for an oversight agency over the Chicago Police Department. From left is Terry Duff with the city’s telecommunications department and right, Salisbury police Lt. Andy Efird. Shavonne Potts/Salisbury Post

And while there’s still some unfinished work, Barnes said there are plans in place to see them through to completion. Barnes said one goal that he didn’t get to see to fruition was the start of a police foundation that would privately fund supplementary items for the department. But the department saw the beginnings of what that might look like, as private citizens helped SPD obtain needed equipment to establish a bike patrol.

“Legitimacy is always a goal that every police leader wants to have. You want a high level of consumer confidence from our citizens and although we are not there yet we are a long way away from where I was when we started,” Barnes said.

There are still unsolved murders waiting for closure, but Barnes takes pride in a 100% clearance rate on homicides since he arrived in 2017, noting that he was not the only one who ensured offenders were brought to justice.

“That is a reflection of collaboration between the community and the police department as well as our other law enforcement partners around the county,” Barnes said.

Officers and city staff attended a farewell event on Friday held at the police department. It was a time for goodbyes and well-wishes. Mayor Karen Alexander read a proclamation that recognized Barnes’ work and his impact within the community.

Alexander said Barnes introduced and became a driving force behind stratified policing, a crime reduction model that uses data and accountability to reduce crime, the use of which resulted in a 20-year low in overall crime in 2019.

While with the department, Barnes also made it a point to take part in panel discussions and community events like those held by social justice group Actions in Faith and Justice. He also was a member of the Human Relations Council, United Way Board of Directors, Rotary Club, and an alumni of Leadership Rowan.

Alexander said Barnes had high expectations for himself and those around him and developed the department’s internal training program to include de-escalation, problem-oriented policing, team building, ethics and working with special populations.

“I’m just delighted he has signed on as a police reserve. We can still claim him,” Alexander said with a laugh.

“He’s been inspirational in bringing analytics to our police department, which also better solves crimes and shows predictable patterns in policing,” Thompson said.

And Barnes received high praise from his chief, too. Police Chief Jerry Stokes said the reduction in crime to a 20-year low in 2019 speaks well for the deputy chief’s work in Salisbury. Barnes specifically introduced a crime-reduction model that Stokes said has been responsible for the reduction.

Stokes said he and Barnes worked together well and complemented each other with their different styles, strengths and weaknesses.

“This is farewell, not goodbye,” Stokes said to those gathered at Friday’s event.

Barnes joked about being raised in the South and moving to a colder climate in Chicago.

“I’m excited about learning the city and the politics of Chicago and looking forward to imparting some southern wisdom in the north. Chicago is a beautiful city with beautiful people, I hope to be able to contribute something,” Barnes said.

Barnes holds a bachelor’s degree in history and pre-law from Elizabeth City State University, a master’s degree in criminal justice from the University of Cincinnati in Ohio, and earned his doctorate in leadership studies/community and civic engagement from N.C. A&T while working with the Salisbury Police Department.

The department has not discussed plans to fill Barnes position.