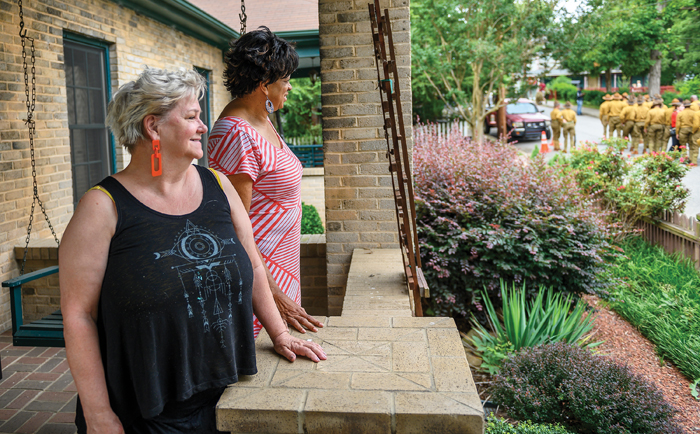 Patt Legg and Rhonda Bivins watch as extras playing soldiers set up for a scene for the movie "The 24th" in 2019 in Salisbury. Salisbury Post File Photo

The streets, structures and houses of Salisbury made a digital debut Friday when a movie filmed here last year — “The 24th” — was released for online viewing.

The film, a sobering dramatization of the Houston riot of 1917 and the events that led to the mutiny by a battalion of the all-Black 24th U.S. Infantry Regiment, used a number of locations in and around Salisbury’s downtown as the backdrop for portions of the film. So, far it has received mostly positive reviews immediately following its release, with an 83% on Rotten Tomatoes.

The film truly finds its stride in its second half, but for any negative reviews it serves as an important piece of educational material about the overt racism Black soldiers faced in the country at the time of the Houston riots.

Particularly because 2020 has seen the explosion of a nationwide movement for racial justice, “The 24th” seems as relevant as ever. Kevin Wilmont, a professor at the University of Kansas and director of “The 24th,” said he wanted to tell the story of the Houston riots because most Americans were unaware of the story.

“If we don’t know our history, we’re doomed to repeat it,” Wilmont told the Post in June 2019.

A sharp-enough eye will easily spot one of Salisbury’s landmarks making an early appearance in the movie. At roughly 17 minutes into the film, viewers can spot the large green board advertising departure times, including to Norwood, in Stanly County, and Asheville during a dance scene.

The board is a dead giveaway, but anyone who’s been to the historic Salisbury Station will recognize the architectural features.

Scenes shot in neighborhoods, particularly those in the daytime, will look familiar, too, for the architecture of the houses. And particularly sharp eyes will likely be able to nail down exact spots on streets where scenes were shot.

Wilmont told the Post in June 2019 that he was attracted to Salisbury for multiple reasons, including that local historic homes and neighborhoods were a good fit.

“It was a really smart choice for the city to preserve the neighborhoods in the way it was,” Wilmont said.

The city and local residents were helpful, and some residents had a front row view to filming that happened on their streets.

The film is not rated. It was originally scheduled to premiere at the South by Southwest festival this year, but the coronavirus pandemic canceled it.

It can be rented or purchased on streaming platforms, including Amazon Prime Video.