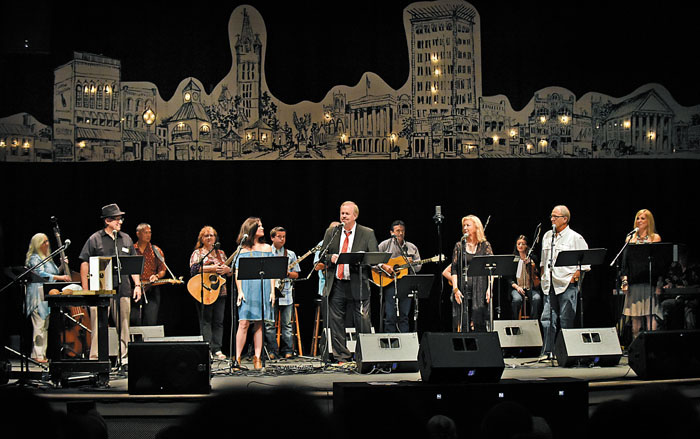 Kent Bernhardt, in the center, with The Moonglows and the Vivian Pennington Hopkins & the Silver String Band in back on stage in the production of ‘Bury Home Companion’ in 2018. " photo by Wayne Hinshaw, for the Salisbury Post

The Salisbury Symphony has announced the return of its popular August fundraiser “A Bury Home Companion” for the fourth straight year.

Sponsored by Farmers and Merchants Bank of Salisbury, it will be presented virtually instead of in person on two consecutive Sunday evenings in late August and early September.

“Presenting the show online, where it can be enjoyed by local families in the comfort of their living rooms, is the next best thing to being there,” says Symphony Executive Director Hunter Safrit, “and it also can be shared with distant friends who wouldn’t be able to see it locally.”

This year’s program will feature the return of the popular vocal/instrumental foursome The Hall Sisters and the Nashville, Tennessee, gospel group Fortress, Jazz guitarist Aron Stornaiuolo, Salisbury’s vocal harmony group The Moonglows (billed as “The Bury Home Singers” for this program) and The Bury Home Silver String Band, composed of bluegrass musicians from Gold Hill led by Vivian Hopkins. More guest performers may be announced.

This year’s program will draw attention to the new Bell Tower Green, a downtown park now under construction and set to open later this year or early next year in Salisbury. While this summer’s event will raise funds for the Salisbury Symphony as always, 10% of this year’s proceeds will be presented to the Bell Tower Green Board of Directors as a gift to help build the new park. The show will also include a special tribute to Salisbury civic leader Paul Fisher and his family for their devotion and support for this and other projects in our community.

Written and produced by Kay Peeler and Kent Bernhardt, the show is modeled after Garrison Keillor’s popular NPR program “A Prairie Home Companion,” which was broadcast live on radio for more than 30 years. Bernhardt and Peeler began producing a live local version of the show in 2017 as an annual late summer fundraiser for the Salisbury Symphony. All of the previous live performances have taken place at the Meroney Theater in downtown Salisbury to growing numbers of appreciative fans.

Those who would like to be among those honoring Paul Fisher with a donation to the ‘Bury Home Companion’ Fundraiser in his honor, can go to the Salisbury Symphony website (salisburysymphony.org) and click on “Honor Paul Fisher,” where you may leave a note of appreciation along with your donation.

“A Bury Home Companion” will air on The Salisbury Symphony website (salisburysymphony.org) and various social media platforms on Aug. 30th and Sept. 6th at 8 p.m. The audio portion only will also be broadcast on WSAT Radio — 1280 AM and 103.3 FM — and online at memories1033.com on Sunday, Aug. 30th at 6 p.m.