Spry has been serving as interim chief since December 2019, when former Police Chief Woody Chavis retired after serving in that role since 2007. Spry will continue to lead a department of 106 officers and staff members.

Kannapolis City Manager Mike Legg was responsible for searching for a new chief of police and decided to elevate Spry to the permanent title after gathering input from community members. 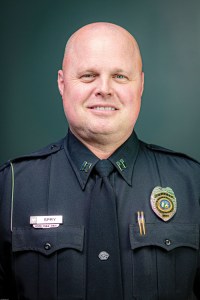 “We are quite fortunate to have someone of Terry’s experience to promote from within, to this critical position in our city,” Legg said in a news release. “Terry has 26 years of experience with the Kannapolis Police Department which will serve him as he continues the long tradition of providing extraordinarily high levels of law enforcement services to our city’s residents. His deep roots and knowledge of our community and its citizens is an undeniable asset that cannot be overstated.”

Spry joined the Kannapolis Police Department in 1994. He’s worked in several different capacities with the department, including positions as a patrol officer, traffic officer, criminal investigator and patrol supervisor. He was promoted to sergeant in 2004, lieutenant in 2010 and captain in 2015.

“I am excited about this opportunity and will continue to foster positive relationships with everyone who lives, works and visits Kannapolis,” Spry said in a news release. “The city is going through monumental changes with the growth in residents and businesses. The phenomenal men and women who work at the Kannapolis Police Department are up to the challenge of adapting to this growth.”

Spry is the 12th person to serve as chief of police in the 114-year history of Kannapolis.