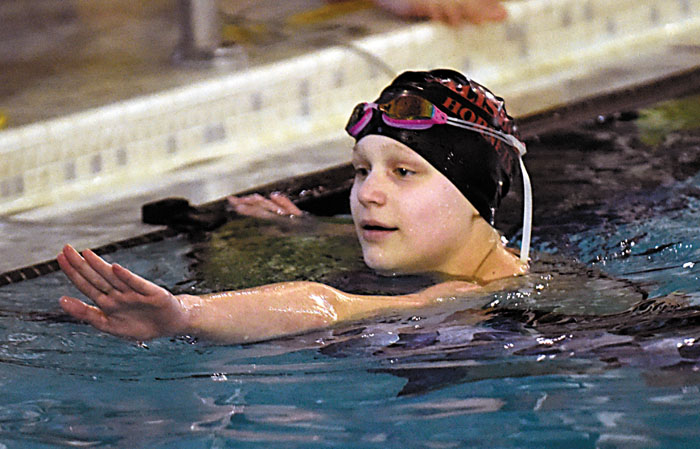 SALISBURY — There’s been a movement to scrap lower-profile, non-revenue college programs, with wrestling, swimming, gymnastics and tennis the sports being hit hardest by the cutbacks.

If you’ve devoted most of  your life to swimming, with both eyes fixed firmly on earning a scholarship, the way that Salisbury High senior Emily Knorr has, that’s a distressing trend.

So Knorr was overjoyed last January when she visited a school that is actively investing in swimming and expanding its commitment to the sport.

West Virginia University’s Aquatic and Track Complex at Mylan Park opened in the fall of 2019, a state-of-the art complex constructed to service swimming, track and field and cross country. The cost was $48 million. A key component of that sum was an Olympic-sized 50-meter pool.

Knorr committed to West Virginia swimming last March, saying yes to the Mountaineers, while saying no thanks to Penn State, which also made her a nice offer.

“I fell in love with everything about West Virginia, the school and the swimming program,” Knorr said. “I’ll have a chance to try some different things there. I can’t wait to do some ice skating.”

Knorr was delighted with her commitment when she made it. She feels even better about it now.

That’s because her twin sister, Katie, has gone through a bit of an ordeal in recent months. Katie had originally committed to East Carolina before the Pirates announced in May the swim program (as well as the tennis program) was going to be discontinued. Katie reopened her recruiting and was fortunate enough to get three offers. She picked UNC Wilmington.

ECU’s shutdown of swimming also impacted the Knorrs’ older brother, Ethan, a former Salisbury star who was a scholarship swimmer there. East Carolina has pledged to honor his scholarship despite the program shutdown, so he’ll continue his  engineering education in Greenville without the time demands of swimming.

With that massive commitment to a new facility, Emily doesn’t have to lose any sleep fretting about West Virginia cutting out swimming during her years there.

West Virginia has a solid program and finished third in the Big 12 last season, behind Texas and Kansas. Still, Knorr is such an elite swimmer that she projects to make an immediate college impact. She already is swimming times that should make her West Virginia’s best entry in the distance freestyle events..

She’s currently ranked seventh among North Carolina swimmers in the Class of 2021  and one of the top 150 nationally.

“She never gets out of breath,” Salisbury coach Sallie Pittman said. “For Emily, the longer, the stronger.  Her pace in a 200 or a 500 isn’t going to change from her first stroke to her last. There are some longer events in college than in high school that will suit her. She could excel even more.”

The Knorrs probably didn’t weigh 100 pounds as freshmen, but they’ve added muscle over the years, and now they’re throwing their weight around pretty well.

Emily has shown serious toughness in the big meets and because of her resolve she owns three state championships entering her senior year.

A turning point came for her at the 1A/2A state championship meet in Cary her sophomore year. She was undefeated in the high school season in both of her individual events until she was out-touched by two taller girls in the 200. All  three finished in a virtual dead heat — 1.:50.52, 1:50.74 and 1:50.86 — but Knorr, who had been the No. 1 seed, had to settle for third place.

That loss — if third in the state counts as a loss — has provided the fuel for everything that’s come since then.

It started with the 500 in that same state meet. She didn’t let that one come down to the wire, winning by more than four seconds.

“I remember swimming with some anger,” Knorr said. “But I’ve always been able to use anger in a positive way.”

Knorr kept her winning streak going as a junior, sweeping the 200 and 500 for her second and third state titles.

“She’s one of the most competitive swimmers I’ve ever seen,” Pittman said. “Just very determined. She remembers the few losses she’s had and she swims with a chip on her shoulder. There are a lot of people want to be the best, but she’s willing to put in the work to be the best and to keep being the best. Swimming is a really tough sport. To be at her level, you’re talking many years of total dedication.”

Knorr is normally a year-round swimmer with Mecklenburg Swim Association, although COVID-19 cut her workload back some in the spring and summer. There were no big meets to prepare for, and she’s very goal-oriented.

Both Knorr twins went 4-for-4 in last season’s Central Carolina Conference championships, taking their two individual events and helping the Hornets win two relays against good competition from schools such as Oak Grove and North Davidson.

The Knorrs have helped Salisbury continue to compete as a top-1o program statewide in 1A/2A, in a sport that is increasingly dominated by charter schools and academies.

The NCHSAA plan is for the first official swim practice of this school year to take place on Nov. 23, with a regular season from Dec. 7-Jan. 30, and hopefully with a postseason to follow.

Knorr will be ready if the swim season happens. She has lofty goals. She might break meet records in the the state championships. She challenged the 1A/2A mark in the 200 as a junior.

Pittman said the second day of school at Salisbury High on Tuesday was “a little easier and a little calmer.”

“We’re all hoping for as normal a school year as possible,” Knorr said.