Rowan native who worked in politics, music, finance on his way to Harvard 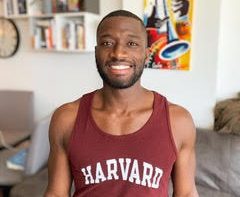 SALISBURY – Tremayne Smith grew up in Cleveland and calls Rowan County and Salisbury home, but he lives and works in Washington, D.C., where he is special assistant to the president and CEO of JPMorgan Chase Institute.

The institute, one arm of banking giant JPMorgan Chase, is a Washington-based think tank that researches national financial health. Smith’s career has moved between politics, policy and music since he graduated from Eastern Carolina University in 2011 with bachelor degrees in music and political science.

While he was at ECU, he served as student body president, homecoming king and head drum major for the Marching Pirates. He is a French horn player by training but proficient in a number of other instruments. After he graduated, he went on to work for the late Kay Hagan as a staff assistant while she was a United States senator.

Smith eventually returned to North Carolina and took over as director of bands at Rocky Mount High School, where he helped expand the school’s arts programs over three years before deciding he wanted to pursue a master’s degree and returning to Washington to pursue a degree in political management from George Washington University.

He attended GWU at night while working for Rep. G.K. Butterfield, N.C., D-1, and assisting Rep. Connor Lamb, a Democrat from Pennsylvania, after Lamb won a special election in 2019 before transitioning off Capitol Hill and into his role at the institute.

Now, Smith is embarking on his latest educational journey at Harvard University, where he will pursue a graduate certificate in social justice with a concentration in economic justice and diversity issues. Once he finishes the certificate, Smith will have the option to complete a second master’s degree.

Smith will be able to attend Harvard at no cost because he meets internal criteria, including performance standards, for JPMorgan to pay for his education.

Smith said he was raised by a single mother, Patricia Watkins. He is an identical twin to Dewayne Smith, a fitness instructor in Salisbury. And when he arrived at ECU, his plans were to become a high school band director.

“I’ve always been interested in multiple things, and among them: music and politics,” Smith said. “There’s always this dance I’ve done between the both of them, and so I figured why not purse all the interests that I have, and if I’m going to pursue something I’m going to do it 110%.”

Smith said his work ethic was instilled in him by his family. He said each opportunity has given him the chance to grow and serve as a mentor for people following behind him.

Smith said he hopes his latest educational endeavor can help him confront some of the inequities that are part of American life presented in economic systems and social justice. Smith said he enjoys what he does with JPMorgan Chase and wants to advance and shape the conversation through the bank. Some day, he would like to run for public office.

“A lot of the systems that we see today were, at their outset, not meant for Black people or people of color,” Smith said. “Systemically they were not for us, and so it is no surprise that we run into friction points when everyone is trying to have an equal shake and a fair shot.”

Smith has an unapologetic dream: he wants to be president some day.

Smith said it is incumbent on him and others to reach back and help people overcome challenges. He said he never would have imagined he would be where he is today.
He credits God for leading him through his career. He said his background in music surprises people and points to the multitasking, awareness and teamwork skills used by musicians as valuable additions to his repertoire of abilities.

Smith’s great-great grandfather was the first person born free in his family, and he was also the first teacher in his family. Smith said his mother always told him he needed an education if he wanted to go somewhere.