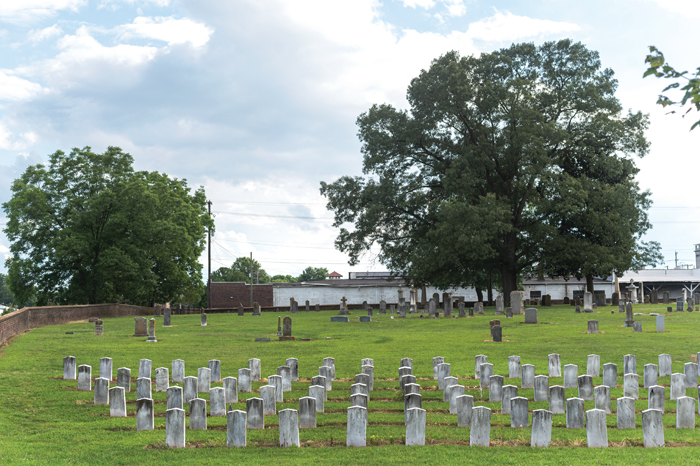 SALISBURY — The Historic Preservation Commission on Thursday approved an application for the new site of the “Fame” Confederate statue, which is to be located in the northeast corner of a historic cemetery on North Lee Street.

The certificate of appropriateness, used by the commission to ensure adherence to local historic district guidelines, proposes the statue would be facing southwest and sit in the northeast corner of the cemetery, bounded by North Lee, East Cemetery and East Franklin streets as well as the railroad right-of-way. Additionally, site amenities for the statue include an 8-foot high wrought iron fence, gate, brick pavers and an LED light to illuminate the statue. Light fixtures would be added to an existing light pole, and it’s intended to only focus on the statue without illuminating the entire cemetery.

One Salisbury resident, Clyde, spoke during the public comment period, suggesting that commission member Steve Cobb recuse himself from the discussion because Cobb is the president of the Board of Trustees for the Historic Salisbury Foundation.

When the agreement was made between the city and the Robert F. Hoke chapter of the United Daughters of the Confederacy in June, the Historic Salisbury Foundation agreed to serve as the fiduciary agent to oversee funds that have been raised for site amenities and maintenance. At least $65,000 has been raised by local historic groups and the descendants of the original UDC who dedicated the statue.

Clyde went on to read an excerpt from a 1908 article when what was then the Salisbury Board of Aldermen approved the site of the statue downtown. Commission chair Andrew Walker stopped Clyde multiple times to clarify that the commission was only authorized to deliberate points of size, scale, materials and other criteria that relate to the appearance of the project and its compatibility with the Historic District Design guidelines, not opinions regarding the location or its relocation altogether.

Clyde said toward the end of the excerpt the downtown location is the place that was chosen by Rowan County, not the city of Salisbury.

“Your job is historic preservation,” he added, stating that his remarks were relevant to the location of the statue.

He asked the commission to not use “fake graves” to commemorate the statue, and said “Fame” would be facing in the wrong direction if placed as proposed.

Salisbury resident Ronnie Smith  noted he was a son of the Confederacy and had lived here for 74 years. Smith said he was there to represent more than 50 Salisbury residents who were unable to attend due to COVID-19 gathering and social distancing restrictions. He requested the commission table the item until more “critical information” could be presented. Smith said he was made aware of new information and “a number of extenuating circumstances” on Monday and has spoken with the mayor.

In a letter he gave commission members, Smith stated the proposed lighting for the statue and other features that may make the proposed site “obsolete as a qualified site.” He added that “eight additional and much more qualified sites have now been identified by interested citizens and organizations in Salisbury.”

Commission members also reiterated to Smith that opinions on the site location were not to be deliberated at Thursday’s meeting.

Smith didn’t elaborate further and said the commission wasn’t allowing him to speak.

“I’m asking you not to vote because you don’t have the information, in my humble opinion, to make a decision,” Smith said.

The commission ultimately approved the certificate, noting that it complied with all necessary guidelines for the historic district.

Catherine Garner, the city’s senior planner, said the United Daughters of the Confederacy could submit another certificate of appropriateness if any other sites considered are within the local historic district.

More than a month ago, the city removed the statue and stored it in an undisclosed location, with the city covering the costs. Once the statue is moved to its final destination, the city will then grant a deed for the new location to the UDC, which will assume full ownership and responsibility.