Beyond the call: local brewery to release beer to help veterans in need 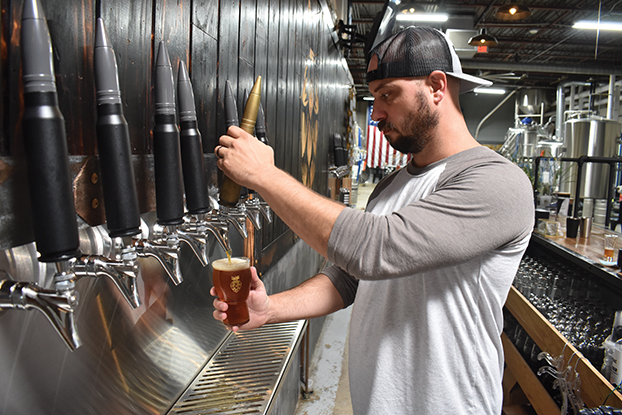 He was stationed in Langenfeld, Germany, for a training deployment with the U.S. Marines and was given a few hours to check out the area. He soon found himself sitting in a centuries-old brewery with a massive beer stein in his hands. When Lingafelt took a sip of the dark liquid in the mug, something clicked.

“I remember all of the old timers sipping, and I’m chugging it like it’s a Bud Light,” Lingafelt said. “It was smooth, had a high ABV, had a good frothy head. And of course they served it in steins that were the size of your head.”

That beer, Lingafelt says, changed the trajectory of his life. Years after taking that first sip in Germany, Lingafelt is now brewing his own beer at Old Armor Beer Company in downtown Kannapolis. And he’s not just brewing beer to make money; he’s doing it to help the community, too.

Old Armor Beer Company, which officially opened in February, is owned by and caters to military veterans and those currently in duty. Since it opened, the brewery has specialty crafted several beers to raise money for veterans and first responders. The first of these beers, called the Blue Line Ale, raised money for local police officers. It sold out just months after its release.

On Saturday, the brewery will release its newest creation. Called W.A.R. — a honey-infused Belgian-style beer. Part of the proceeds from W.A.R., which stands for Warriors Always Rise, will go toward helping a local veteran in need. 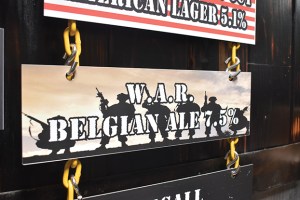 W.A.R. will be a mainstay on the Old Armor Beer Company’s menu. Ben Stansell/Salisbury Post

Brewing beer to help veterans is something Lingafelt planned on doing long before Old Armor opened its doors. The seed for the idea was planted years ago, when he met a couple of veterans in a city across the country.

“This is a good idea”

Lingafelt was so enamored with the rich, chocolatey stout he’d enjoyed in Germany that he tried to recreate it with friends he met in graduate school at the University of Southern California. The two friends, Stefan Perrine and Richard Bradley, also served in the military. The trio quickly bonded over shared military experiences and their passion for creating delicious beer.

On weekends, they started taking the beer they experimentally brewed at home to USC tailgates. The beer — a chocolate-vanilla stout that looked to replicate the German stout Lingafelt loved — was a hit.

“While at grad school, we were brewing and taking beers out to tailgates and stuff,” Lingafelt said. “People were like ‘This is really good.’ We were taking out little sixtels, two of them at a time. It’d be 90 degrees and people would still be tearing through it.”

Around that same time, Lingafelt and his friends were taking an entrepreneurial class at USC. They were tasked with creating a hypothetical business plan. Their topic of choice was a no brainer.

“We decided we were going to do a brewery,” Lingafelt said.

Their professor was impressed.

“As we started doing it, he was like ‘Y’all should do this. This is a good idea. It’s 100% veteran owned, you brew good beer, great story and good background. That would kill.’ We took it, raised our funds and did it ourselves,” Lingafelt said.

When it came time to pick a location, Lingafelt, who grew up in the Kannapolis area, knew of a spot they could checkout. At the time they visited the empty corner building downtown, the streets were muddy and the area was undeveloped. Still, he saw the potential.

Since Old Armor started slinging suds, downtown Kannapolis has started growing up around it. The Cannon Ballers’ brand new baseball stadium is within view and a multi-tiered apartment complex has been raised from the ground next door. And besides new development, Lingafelt has also seen a veteran community come together around the brewery. 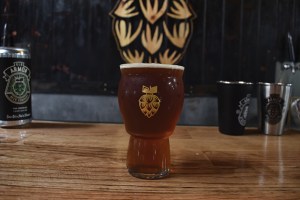 Matt Shumaker, who served in the Marines during Desert Storm, has become a regular at Old Armor. He enjoys the beer, but mostly finds himself going back time and time again because of the atmosphere.

“I swear, every time I go down there I meet two or three new veterans that I didn’t even know lived here,” Shumaker said. “This is a great place for veterans to get together.”

Even when Shumaker walks into the brewery not knowing anyone, it doesn’t take long for him to make a new connection.

“Last Friday when I was down there, I met a Kannapolis police officer who had gotten out of the Marines four years after me,” Shumaker said. “We sat and talked for a long time. It’s a good place to just run into individuals.”

That kind of camaraderie can be crucial for veterans who are still readjusting to civilian life. In addition to creating a place for veterans to coalesce, Lingafelt and his co-owners are helping them in more tangible ways.

The brewery wants to provide a discount on their beer for members of the military. The only obstacle standing in the way was North Carolina’s alcohol laws.

“We had planned on doing it from day one. When we started reading into the alcohol laws, you can’t discount beer,” Lingafelt said. “We can’t do a military discount with alcohol.”

However, there are no laws in place that prohibited them from buying a veteran a beer. So, instead of having a permanent discount, they started the Pay it Forward Board. 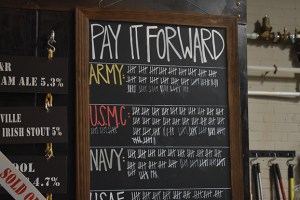 The “Pay It Forward” board started as a small board that could be held in one hand. Now, it has to be hung behind the bar. Ben Stansell/Salisbury Post

Lingafelt said they have given over $20,000 worth of beer to members of the military and veterans through the Pay it Forward Board.

Still, they want to do more.

That’s manifested itself in the special line of beers that are created to benefit charity, such as the Blue Line Ale and W.A.R. Most of these beers will be a limited release, brewed only once. But W.A.R. will be a mainstay on the brewery’s beer list.

“We put this beer together and the proceeds will go to helping veterans who need things,” Lingafelt said. “We have a veteran who needs a new wheelchair ramp on his house, to even bigger things like if someone needs a new roof on his house.”

The brewing team at Old Armor has also started a batch of beer that will be released around the anniversary of the Sept. 11, 2001, attacks on the World Trade Center. Proceeds from that beer will go toward a fund that benefits the families of those who lost their lives in the attacks. Along with the release of the new beer, Old Armor plans on placing two stairmasters in front of the brewery and having teams walk 110 flights of stairs to honor those who died in the attacks. They hope to have local companies sponsor the event to raise more money. 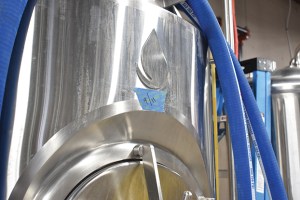 A beer that will be released near the anniversary of 9/11 is currently brewing in one of Old Armor’s tanks. Ben Stansell/Salisbury Post

And Old Armor won’t be stopping there.

“We know the bigger we can get, the more we can do,” Lingafelt said. “To us, we understand what they’re going through and we try to help anyway we can. It’s something we’re passionate about. I guarantee we’ll help more than any business around and as we grow we just want to keep doing more.”

More information on Old Armor’s beer releases can be found online at https://www.facebook.com/oldarmor/ or at oldarmorbeer.net.