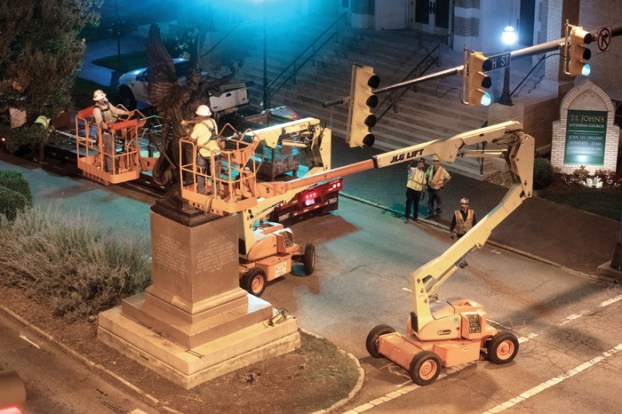 SALISBURY — More than a month after the city removed and stored the “Fame” Confederate statue, the next step in the relocation process will be discussed Thursday by the Historic Preservation Commission.

The Robert F. Hoke chapter of the United Daughters of the Confederacy, which owns the statue, has submitted a certificate of appropriateness to be reviewed by the Historic Preservation Commission, which includes plans for a wrought iron fence, gate and brick pavers. The proposed location is in the northeast corner of a historic cemetery on North Lee Street where Confederate soldiers are buried. The cemetery is bounded by North Lee, East Cemetery and East Franklin streets, and the N.C. Railroad Right-of-Way.

Catherine Garner, the city’s senior planner and development services specialist, said the commission is only authorized to consider and deliberate points of size, scale, materials and other criteria that relate to the appearance of the project and its compatibility with the Historic District Design guidelines.

Garner added that the proposed location is the only one the commission will be considering at Thursday’s meeting. If the UDC wishes to consider other locations, new certificates would be required if they’re within the local historic district.

Garner added that there have been several inquires from the public about the commission’s meeting, but they have been advised to attend the public hearing portion if they have evidence and testimony to provide regarding the appropriateness of the statue. Since the commission is a quasi-judicial body, public comment will not be received. Instead, only sworn evidence and testimony can be presented.

She added that any opinion on the monument or its location is “not relevant to the commission’s task and cannot be considered.”

The matter will be discussed during the meeting’s second block, which begins at 3 p.m., at the Council Chamber at City Hall, located at 217 South Main
Street. Garner said chairs are spaced 6 feet apart in the council chambers, and preference for anyone who attends will be given to parties of whichever case the commission is hearing at the time. Parties involved with the “Fame” discussion will be accommodated, and members of the public will be accommodated as space allows.

Masks are required, she added.

The Salisbury City Council unanimously agreed at a meeting on June 16 to relocate the statue after declaring its location a public safety issue. Early on July 7, the city removed the statue from the intersection of West Innes and Church streets, where it stood for more than 100 years after being dedicated in 1909. The city then stored the statue in an undisclosed location.

The decision to relocate the Confederate statue came after swaths of the community called the monument a public safety issue and “flashpoint” after a man fired gunshots into the air on May 31 during a protest focused on the death of George Floyd in Minneapolis and other Black Americans who have been killed because of injustice.

The agreement between the city and the UDC states city government will handle costs of storing the statue and relocating it to its new location at the cemetery. The city will then grant a deed for the new location to the UDC, which will assume full ownership and responsibility.

Additionally, at least $65,000 has been raised to add the amenities to the new location by descendants of the original UDC members who dedicated the monument and local historic groups. The Historic Salisbury Foundation has agreed to serve as the fiduciary agent to oversee those funds. Ed Norvell, one of the descendants of the original daughters who erected the statue, played a key role in gathering the funds to cover the proposed site amenities. He has previously said the goal is to have some money in reserves for future repairs or maintenance, if needed.

Garner said that because the city officially declared the statue a public safety issue the relocation agreement could be OK without a certificate of appropriateness approved by the commission beforehand. She cited Section 2.6.C.6.g of the adopted Land Development Ordinance, the city’s zoning code, which states that “the construction, reconstruction, alteration, restoration, moving or demolition of any exterior architectural features, which the city code inspector or similar official shall certify is required for public safety because of an unsafe or dangerous condition, shall not be prevented by the requirements pertaining to the landmark, or the historic district.”

However, she added, any permanent placement of art within the historic district requires a certificate of appropriateness from the commission.