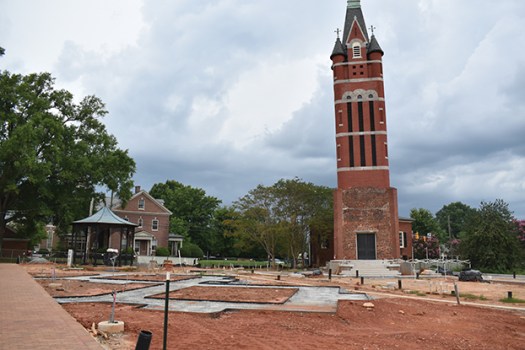 The red dirt surrounding the Bell Tower will soon be transformed into a vibrant green space. 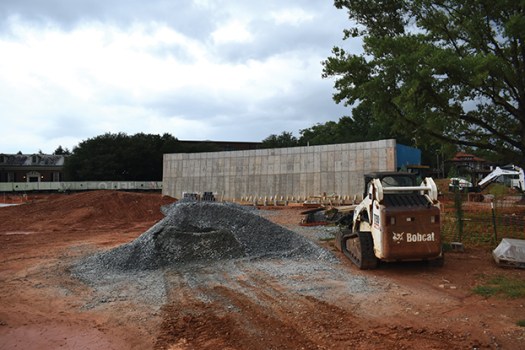 With the ability to change water flow at any time, the water wall will be a fluid centerpiece for the park. Ben Stansell/Salisbury Post 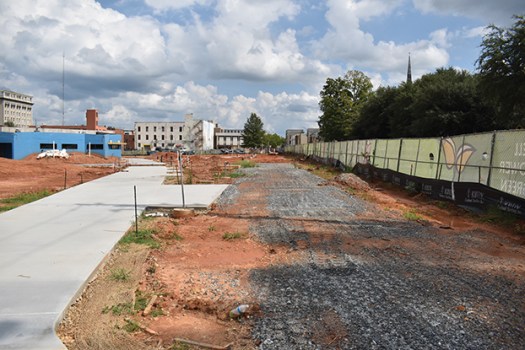 A freshly cemented pathway is nestled next to gravel that will become parking spaces for park visitors. Ben Stansell/Salisbury Post 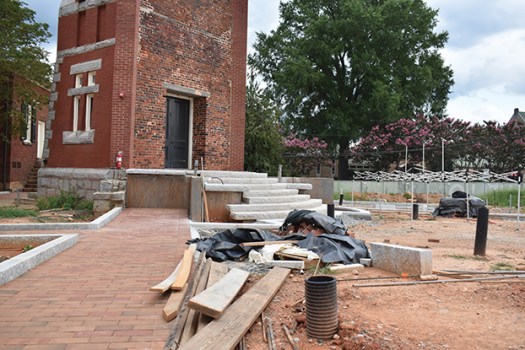 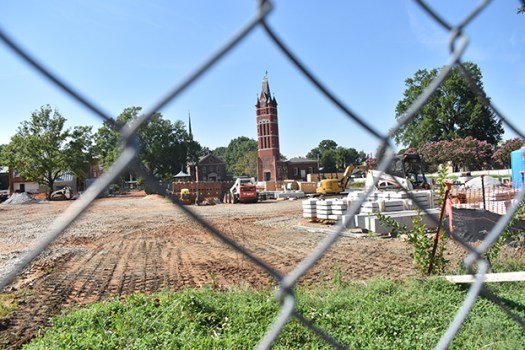 Some construction can be seen from outside the fence, but most the of the work that has been done is tough to see from a distance. Ben Stansell/Salisbury Post 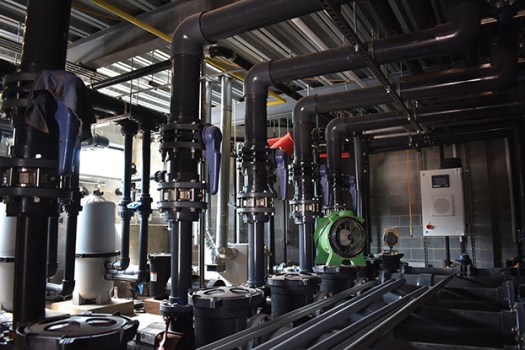 These newly installed valves and tubes will supply thousands of gallons of water to the park's water wall. Ben Stansell/Salisbury Post 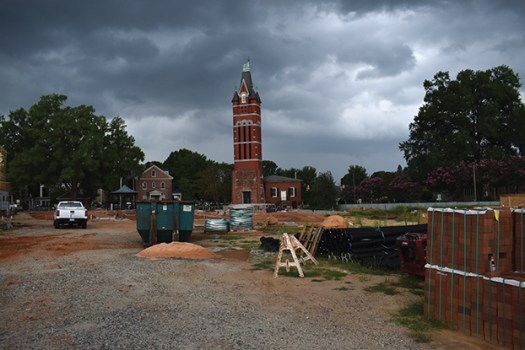 Stormy skies like the ones behind the Bell Tower have led to construction delays. Ben Stansell/Salisbury Post

Messinger and Walser, president and vice president of Bell Tower Green Park, see a luscious, leafy park in the not-too-distant future as they walk through the construction site that the nonprofit organization has raised millions of dollars to complete. Construction on the $12 million park started in August 2019 and was projected to be completed by this fall. But complications related to COVID-19 and rain have pushed back progress.

“We were ahead of schedule for a while, then had a lot of rain starting around Thanksgiving,” Walser said. “We’ve had other issues caused by COVID from materials not getting here to manufacturing and shipping to labor. It was a perfect storm of things.”

The park is now projected to open early next year. Messinger is circling early April as an opening day, but expects things to be done sooner.

At first, construction was delayed by the deluge of rain that covered Salisbury throughout January and February. That weather limited the number of days that workers could be on site. Then, when the coronavirus pandemic gripped the country, everything ground to a halt. From a lack of materials to a lack of workers, progress was stalled at every turn.

“We’ve got a real challenge with workers from Mexico who are very skilled with landscaping and stonework and brickwork,” Messinger said. “They can’t get in because of COVID. They would’ve come in, worked for nine months, then gone home. Our contractors were counting on that labor, but because of COVID they just can’t get here.” 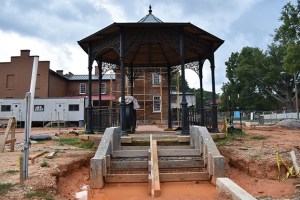 Even with a reduced number of workers, the park is slowly taking shape. Concrete pathways have been poured, granite steps have been put in place and the water wall has been covered in concrete. Walser knows that progress is hard to see from outside the green cloth-covered fencing, but he is proud of the improvements that have already taken place.

“Throughout all this time, we’ve been building and building and building, but if you’re just driving around the exterior, you don’t really see what’s been happening because there’s so much infrastructure underground,” Walser said. “We’ve had a ton of electricity, fiber optics, storm water runoff, sewer.”

From stumbling upon a historic artifact to hitting something underground that was buried long ago, that much digging can lead to problems. Fortunately for the park’s progress, construction workers haven’t run into many unforeseen problems lurking beneath the surface.

The storage tanks were most likely relics from a time when homes and apartment buildings covered the southern portion of the land where the park is being constructed.

Messinger and Walser made sure that nothing above ground would impede progress either. A ghost-hunting crew even visited the park to canvas the Wrenn House. Built in the 1800s and used initially as a Female Academy, the Wrenn House was most recently a restaurant.

“We had someone looking for ghosts in this building,” Walser said. “They brought in infrared equipment and noise equipment and everything.”

But not even lingering spirits have prevented workers from giving the Wrenn House a much-needed facelift. Once extensive brickwork and other renovations are completed, the building is slated to once again operate as a private restaurant. Only this time, it’ll have an entire park as its backyard.

Messinger and Walser don’t expect funding shortages to hamper construction. Bell Tower Green Inc., which plans on donating the park to the city upon completion, originally set out to raise $12 million to finish the park. The group has raised over $11 million so far and is only about $200,000 away from hitting its goal. However, that number is a moving target due to decisions that cut costs or complications that raise them.

“We have been cutting costs because of COVID. We thought we were going to get some funding from the county and city that’s not going to come, which is completely understandable because of economic challenges,” Walser said. “We’ve had to make cuts to the roads, the streetscape. We’ve had to make changes to the roof of the stage. Small things. I can tell you to the penny what we need to raise today, but tomorrow that number could change.”

With the construction crew finishing up major pieces of the park’s infrastructure, more completed details will be visible in the near future.

“In the next month or two, you’re going to start seeing elements of the top of the ground’s infrastructure, which, when people see trees and grass, it will be more exciting,” Walser said.