Students return to school for first time since COVID-19 shutdown 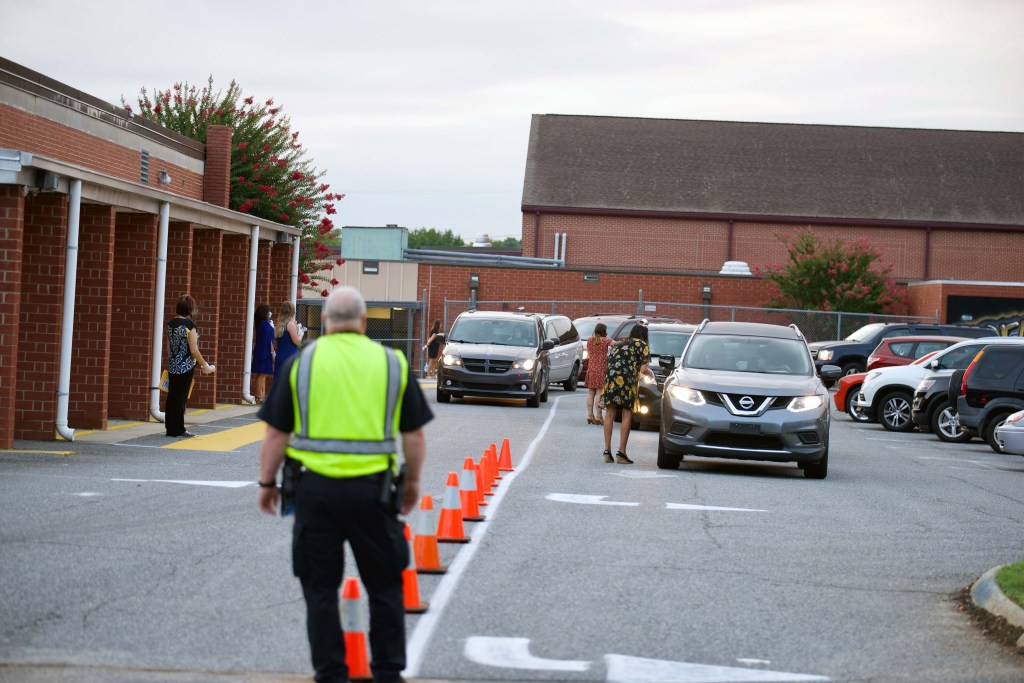 Carl Blankenship/Salisbury Post - Car riders at Corriher-Lipe Middle School were greeted individually as they filtered in and had their temperatures checked.

LANDIS – Monday was as close to a normal day as possible when students arrived for their first day of class at Corriher-Lipe Middle School.

By 7:30 a.m., when classes began, the bus riders were inside and there were a handful of car riders still being screened. After about a month of planning, uncertainty and nerves running high as the district prepared to be one of about half in the state to bring children to schools, things appeared to go according to plan at Corriher-Lipe, one of the district’s 37 schools.

Rowan-Salisbury Schools Superintendent Lynn Moody, standing across the street as students arrived, said the 1923 facility was never meant to take in car riders. The district is also limited to 24 students on a bus. Moody said there were some backup bus drivers on hand for Monday and the district created new routes for the modified schedule.

Every student at every school in the district had their temperatures checked when they arrived. Students are supposed to fill out screening questionnaires before they arrive as well.

Fewer than half the students who would normally attend the school arrived Monday morning. This is group A, which will attend Monday and Tuesday. The second group will come to school on Thursday and Friday. Thousands of students will only go to school virtually.

Moody asked families to be patient with the district as it works through the opening process, and said the goal for the first day is just to connect with students. She said parents should not be surprised if not much work goes home with students for the first two weeks.

Moody said there was learning loss after public schools were ordered to close in March in addition to the loss that always happens during the summer, and the schools will be taking things slow to start off the year. Moody, though, added kids are resilient and will catch up.

Kendra Kennedy, a seventh grader at Corriher-Lipe, arrived at the school with her mother, Alicia, and sister Sarah on Monday.

Kendra said she was a little excited to go back to school, though she was not looking forward to the work.

Alicia said she is somewhat happy her students are returning to school and is fine with two days a week, but is also a bit worried about COVID-19.

“They still need to intermingle with their friends,” Alicia said.

Sarah said she is used to going to school five days a week and “likes the normal schedule.” Sarah and Kendra both struggled with virtual learning when schools closed.

The girls said they dislike wearing the masks that they will be required to wear most of the day during school, but they have gotten used to it.

Tamara Hill dropped off her seventh-grade son on Monday. Hill said she is glad students are able to go to school. She said she feels confident in the safety measures and thought the school is handling it well.

“It went really well,” Hill said. “I had a little health screening that I had to fill out this morning. It was a little app, but it went really quickly.”

For kindergarten students, Monday was likely their first experience with school. Moody said the most important thing for kindergartners is to pick the right teachers, and the district has teachers who can integrate students from all circumstances and backgrounds.