Story behind Highway Patrol handgun started with someone mowing grass 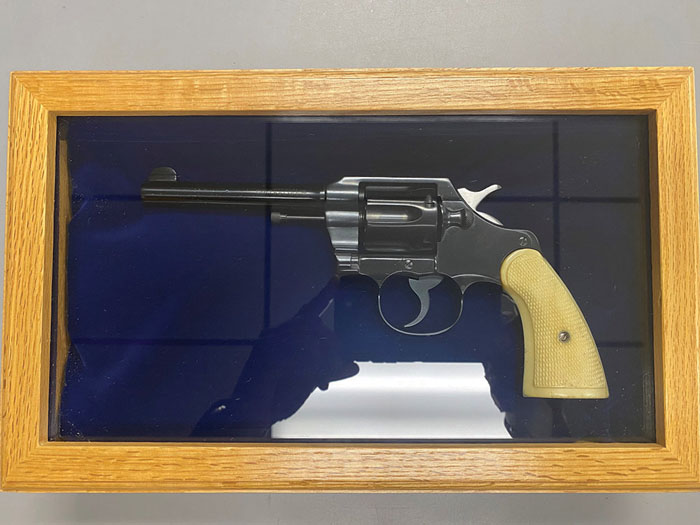 SALISBURY — A mysterious handgun found in the middle of a field a year ago has since made its way back home to the N.C. State Highway Patrol along with its rich history,

The gun, a Colt revolver, was discovered by someone mowing a field located off South Main Street in 2019. An empty black backpack was found beside the rusted gun, said Salisbury Police detective Jay Basinger.

Basinger said a patrol officer was called to the scene to retrieve the gun. When the officer couldn’t make out any markings on the gun, he turned it over to Basinger. As a crime scene investigator, Basinger processes guns regularly with serial numbers etched off or older guns like the revolver that was found.

“We got enough to where we could read the serial numbers and the markings,” Basinger said.

The detective said he was able to clean and restore the gun in June 2019 enough that he could make out the letters N.C.S H.P. No. 10. on the bottom of the grip. Basinger said he contacted the local Highway Patrol Troop E office located on South Main Street. There, law enforcement officers were able to determine that the gun had not been reported stolen.

But Basinger said it was a mystery to him as to why the gun was left in a field. The police department’s records only go so far, he said.

The gun was found and restored two weeks before the 90th anniversary of the Highway Patrol.

“This piece of history was found and returned to the North Carolina State Highway Patrol during the year of our 90th anniversary. The highway patrol has always taken pride in our rich heritage,” said Sgt. Christopher Knox with the State Highway Patrol Public Information Office.

Knox said the highway patrol contacted the Colt Firearms Manufacturing Company to check the serial number to determine the origin of the gun. The Office of the Colt Historian in Bloomfield, Connecticut, determined the gun was originally shipped to the State Highway Patrol in care of Capt. Chris D. Farmer on April 29, 1929.

The gun would’ve been assigned to R.R. Glover, who was a Raleigh native, and the 10th original member of the organization. When Glover became a trooper, he was employed by the State Highway Commission in Raleigh. During the 1931 reorganization, Glover was promoted to corporal. While working out of Asheville, he was ambushed and shot near Canton.

He was the first member of the highway patrol organization to be shot but he was not seriously injured. After working for the highway patrol for a number of years, he transferred from patrol to work for the License Plate Identification Division of the Department of Motor Vehicles in Raleigh.

Knox said it’s not clear if Glover lost the gun or it was stolen.

He said they have not been able to connect with any of Glover’s family members.

The gun is fully functional and will remain with the Highway Patrol’s Armory in the Historical Firearms Section.