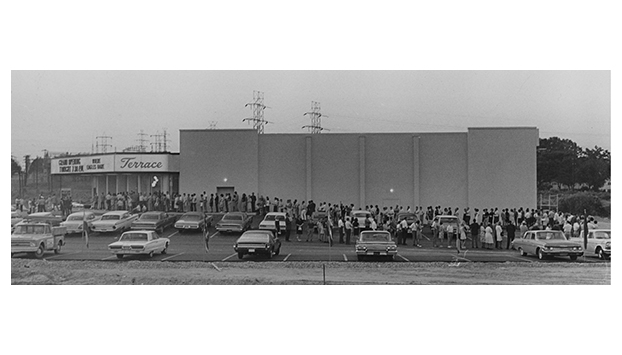 Salisbury Post file photo - This photo shows opening night at the Terrance Theater in 1969. It drew a big crowd of people that lined up around the building. The marquee says, ‘Grand opening tonight 7:30 p.m.’ and notes that the feature film was ‘Where Eagles Dare.’

Maybe “Hercules.” It could have been “Batman & Robin,” “Space Jam” or “The Lost World: Jurassic Park.” Particularly when my dad was serving in the Army and deployed for months or a year at a time, I spent a lot of weekends going to the movies with my mom.

“You were my date,” she jokes.

Now, any movies I watch, particularly because of COVID-19, are on a TV screen in my house or my laptop.

But both the mid-1990s and modern-day Netflix have notable differences from the era in which James A. Smith got his start.

Smith worked for years as a projectionist in Salisbury, including at the Terrace Theater. And he has a sharp memory of the people and films that kept local theaters running and people coming back for more. He called the Post last week after reading the Ask Us story about a time capsule buried there.

“I know you talked to Mike Cline (a local theater expert), but I’ve got a few things you might want to know,” Smith started.

He recalled that the first movie shown in the Terrance was a film called “Where Eagles Dare.” It starred Richard Burton, who played Maj. John Smith and Maj. Johann Scmidt; Clint Eastwood, who played Lt. Morris Schaffer; and Mary Ure, who played Mary Ellison. The film focused on a team of allied soldiers in Europe taking on a daring rescue during World War II.

Usually, there would be previews and advertisements for local merchants shown before the films in Salisbury theaters, but Smith said there was just a “short subject” shown that night. It’s not a term used very often, but its name is apt. Generally, short subjects were short films shown before a feature-length. At the opening of the Terrance, Smith recalled shoring “Sky Over Holland,” which was an urban and rural tour of the country.

Maybe I’m revealing my age by saying I didn’t know this: Movies were usually shown at just one movie theater in a market instead of the same films being shown at multiple places. Naturally, the theaters with the “hottest” films drew the biggest crowds.

“They would have to hustle to get the best films they could get from their distributor,” he said.

And those films would be shown one at a time and for weeks at a time to ensure plenty of people were able to see it.

“Now, a theater is actually one big, large building and you may have six or eight films showing at once,” he said.

Lately, of course, there have not been theaters showing movies because of COVID-19. The Cinemark Tineseltown theater off of Faith Road closed temporarily in early April, resulting in 30 people being laid off.

Smith first picked up the projectionist trade while he served in the Army in the 1950s. At the beginning, it was mostly a way to earn a little extra money. But he eventually made it a full-time job. And he moved to Salisbury in 1963. For a time, he served as head of a local projectionist union.

“Things were different back then,” he said. “The equipment and everything has changed, from the way that film came in to other things. It would come in reels and the operators come in and had to build the shows. It was quite an operation.”

The ways in which we consume movies are, of course, much different today. In the ‘50s, ‘60s and ‘70s, the only way for most people to see a movie was to head to a drive-in or sit in a movie theater.

Tonight, just navigate to your favorite streaming service or, if you want to permanently add the move to your library, buy it on your smartphone and immediately start watching it in bed. No travel required.

It’s hard to imagine how things could change even further. We’re already at the point where you can click a button; ask your TV or smartphone to start playing a movie and see it instantly start playing on the wall. But everyone has likely experienced a moment where they’ve been surprised by what technology can do. There will be more of those moments to come.